On September 23rd 25154 was working the Parkend ballast train.

On August 3rd an evening Curzon Street - Plymouth was noted at Gloucester behind 25154.

Although the South Wales allocation of Class 25s had been greatly depleted earlier in the year, the Christmas break found three Class 25s stabled at area depots, with 25054 at Severn Tunnel Junction and 25055 & 25154 at Cardiff Canton.

The early morning Peterborough - Cambridge parcels was worked by 25154 on August 9th.

On the morning of December 6th 25154 was at Reddish with a down freight.

On the evening of November 28th 25154 was noted at Crewe station with an HST barrier vehicle and ex-works HST power car 43078 on wheelskates under the leading axle at the cab end. 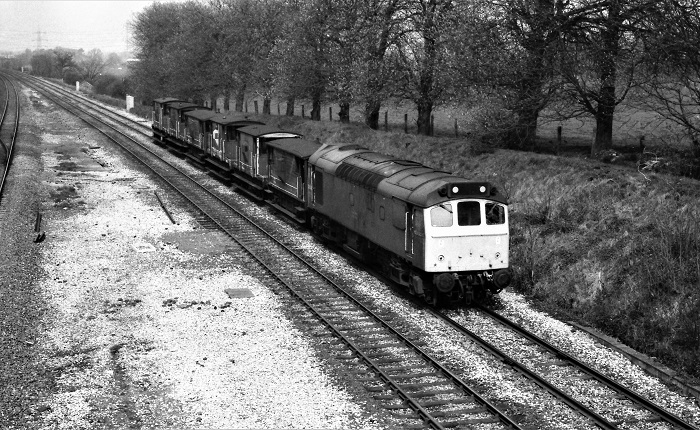 Photograph courtesy Martin Margerrison.
What is believed to be 25154 heads through Kegworth sometime during 1979.

At about 11am on March 21st 25154 was noted at Manchester Victoria with an up freight.

On July 14th 25154 was noted at Llandudno Town with a summer timetable service from Stoke on Trent.

The Nottingham - Llandudno Town summer dated service on May 16th was noted at Stoke on Trent with 25154. 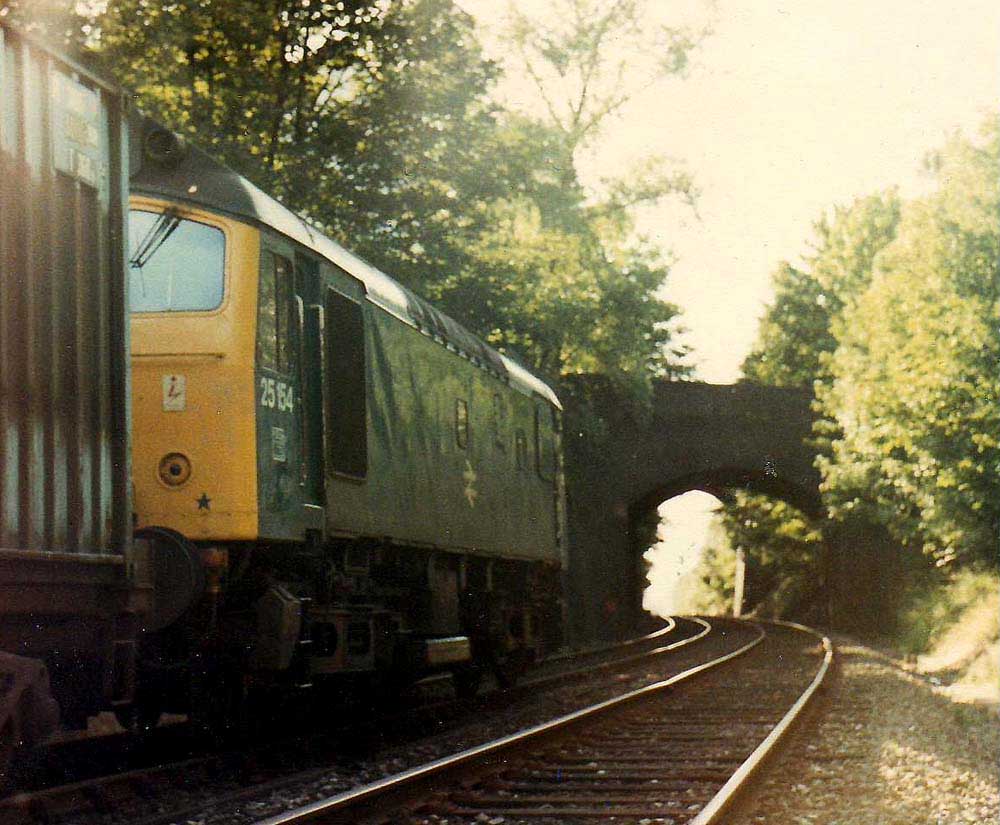 Photograph courtesy David Smith
25154 waits for a signal just south of Sutton Park on July 3rd 1981. The working is the 4L51 return containers from Gosford (Bell Green) to Linwood via Dudley.

A late season run over the Cambrian line took place on September 12th with 25154 & 25160 working the 10.10 Euston - Aberystwyth from Birmingham New Street, returning with the 18.00 Aberystwyth - Wolverhampton.

A diesel multiple unit failure on May 4th saw 25154 assist the 15.28 Birmingham New Street - Cambridge from Melton Mowbray to Cambridge. 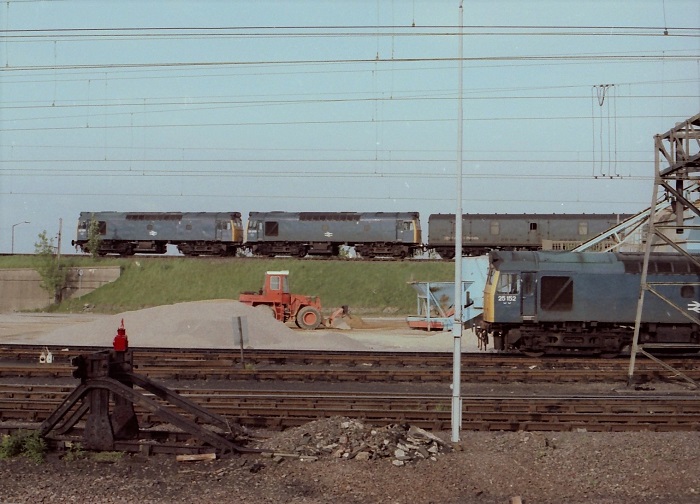 On July 10th 25154 and a ballast machine were noted at Harpenden and later at Dudding Hill.

25154 was stabled at Leeds City station on September 16th.

The 15.02 Manchester – Bristol parcels continued with Class 25 haulage, on November 15th 25154 failed on this working at Hereford, remarkably 25244 was available to take the train forward. 25154 was towed northwards on November 17th. About a week later a rescue job took place on November 23rd when 45026 failed at Stalybridge on the 15.00 Scarborough - Liverpool, 25154 worked the train forward to Liverpool.

1984
45136 working January 31st’s 12.05 Liverpool – Scarborough failed at Greenfield, 25154 pushed the train to Huddersfield, here removing the Peak. Replacement 47145 got no further than Dewsbury before requiring assistance from the following train, a Bangor – Scarborough service headed by 45145, which pushed the failed train into Leeds.

On the last day of February 25154 worked the afternoon Elswick – Ardrossan tanks returning the next day with the empties.

On March 1st 25154 worked an Ardrossan - Elswick freight, then heading west with an Elswick - Ardrossan freight.

Two railtours followed - on May 6th a return LNER Society charter from Aberystwyth to Euston was worked by 25154 from Shrewsbury to Wolverhampton. The next day (7th) a Swindon - Aberystwyth Wessex railtour was worked from/to Birmingham New Street by 25154 & 25209, running as service trains west of Shrewsbury. On May 8th 25154 was noted passing Claydon (Oxon) with a down van train comprised of at least 25 short-wheelbase vans mostly in railfreight livery.

On November 19th 25154 was noted at Nuneaton with a track panel train.

1985
The Ashburys - Dowlow trip freight on March 10th was worked by 25154, The train included a variety of about twenty wagons and a Stanier brakevan, with the mixture of vacuum braked wagons having likely received repairs at Ashburys wagon shops.

No.1 cab front, 2nd man's side, next to lightning flash - dent/missing paint at least March 1983 to withdrawal.