A Royal Train working on June 22nd for the French President (Gatwick – Victoria). Class 31s were used for this working but 25222 was used to get the coaching stock back to the LMR – Wolverton?

With 1977 being the Jubilee Year for Queen Elizabeth II, the monarch and family made many public appearances, making considerable use of the new Royal Train. A visit to Stockport on June 21st ended with the Royal Train utilised for the journey to Porthmadog. The journey west of Shrewsbury was handled by 25221 & 25222. After staying overnight at Porthmadog the train ran to Harlech, where the Royal Family took to road transport. From Harlech the empty coaching stock was taken forward by 25218. 25222 & 25221 were back at Crewe by June 26th. 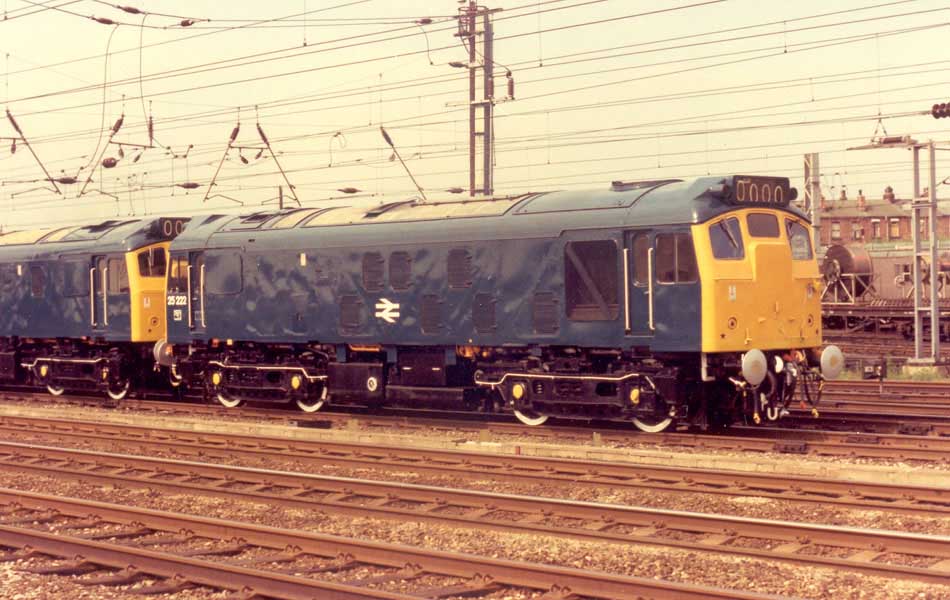 Photograph collection of webmaster
25222 & 25221 at Springs Branch sometine during 1977, possibly related to the workings described above? Visible on the driver's side of the cab is the radio communication cable and its connector box draped over the handrail.

25221 & 25222 were noted on July 26th bringing the Royal Train empty coaching stock from Wolverton to Newcastle, via Carlisle. At Newcastle Princess Anne boarded for the journey to Dumfries. 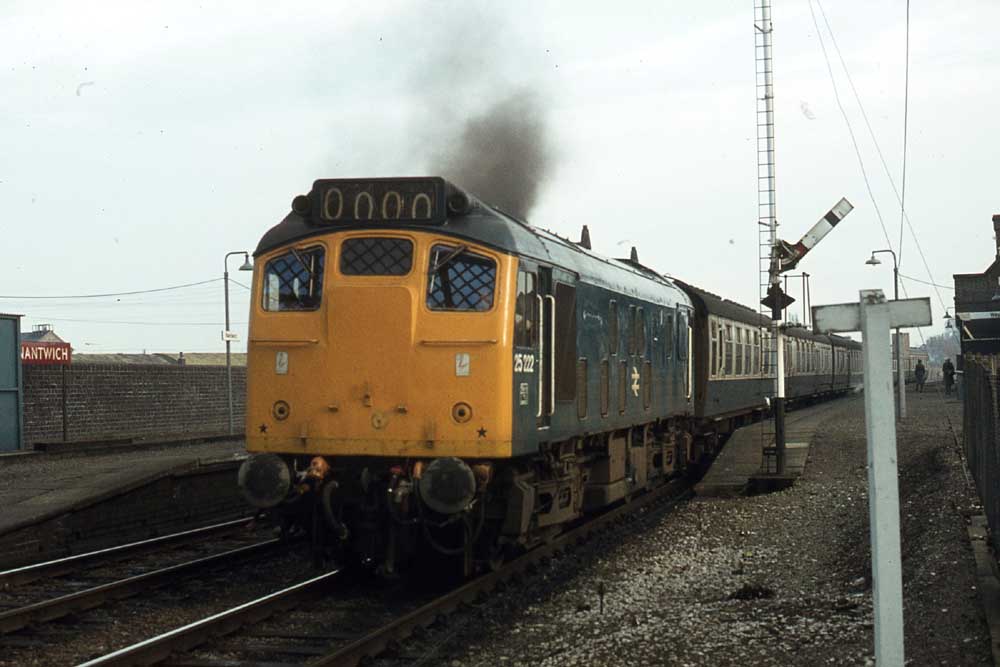 Photograph courtesy Peter Lovell
On January 7th 1978 25222 heads away from Nantwich with the 12:22 Crewe – Cardiff. After photographing an ex-works class 40 on the Crewe Works test train in the opposite direction it was three hours in the pub before continuing with 25055 on the 16:00 Crewe – Cardiff.

There was a multitude of Class 25s in the area of Bushey & Oxhey station from February 17th onwards following the dramatic derailment there of the 16th’s 20.25 Euston – Manchester due to a track defect. The locomotive 87007 was the only part of the train to remain on the tracks, four of the MkIII coaches ended up on their sides, with one (M12162) bringing down the overhead gantries, which blocked the slow lines. Most fortunately there were only minor injuries. Three breakdown cranes attended, from Bescot, Finsbury Park – brought in by 25279 & 25256, and Old Oak Common – arrived behind 25152 & 25189. The slow lines were reopened late on the 17th, the dc lines late on the 19th, the fast lines by the 25th. Spoil trains used 25222 & 25243 and 25130 & 25173, this first pair returned with track panels on 21st, followed by 25256 on the re-wiring train.

Further to the above incident comes information from Andrew Carlile, who was travelling on a train behind the Manchester express. 'Ironically we were on the Euston to Liverpool train that day. Cannot recall the exact time it should depart, could of been 19.45 or 20.00 but it was held up because the guard did not arrive for the train. Therefore train left late and was immediately behind the Manchester train. Potentially it could of been our train that derailed that day. Anyway we were stuck immediately behind the derailment for over 4 hours. As mentioned 25222 was in the area and this locomotive dragged our train back to Euston arriving back at 1am. I remember the Class 25 at the buffer stops at Euston. Think the train engine was an 87 but we were then bussed from Euston to St Pancras. They had laid a relief train on at St Pancras but we were on last bus and they let the train go before we arrived!! Another relief train arrived with a Class 45 which took us to Nuneaton and changed to electric traction to Runcorn. An eventful day but I do remember the Class 25 having to work really hard and slowly dragging train back to Euston'.

On April 3rd (Maundy Thursday) 25222 & 25054 worked the 09.50 Nottingham - St Pancras relief. The weekend of April 6th/7th proved to quite hectic for 25222 & 25054, on 6th they worked a roundtrip Leicester - Scarborough excursion, whilst the following day (7th) they worked a roundtrip Nottingham - Barry Island day excursion for a weekend total of 623 passenger miles.

25222 was noted Clayton Bridge, Manchester on April 16th with a lengthy freight.

The final recorded passenger working was perhaps a fine tribute to a five year veteran of Holbeck when on August 9th 25222 & 25061 worked the 18.08 Penzance - Leeds forward from Birmingham New Street.

On the eveining of August 22nd 25222 was noted at Blackburn, Manchester Victoria and Red Bank sidings.

On the morning of August 23rd 25222 was noted at Newton Heath depot.