On July 21st a Kensington Olympia - St. Austell motorail service failed behind 1662 at ??,7574 & 7573 were used to drag the service to St. Austell. They were then used to start out the returning working as far as?? 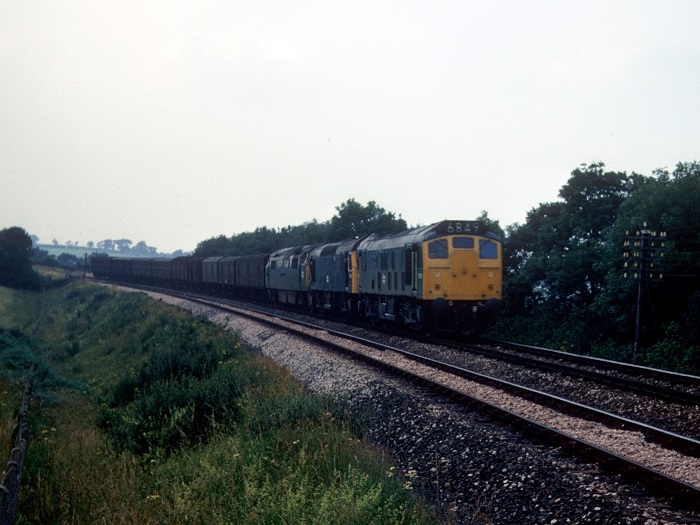 At about 5pm on August 19th the 15.30 St Austell - Newton Abbot empty coaching stock off the down motorail was noted passing Liskeard with 1716 & 7574. About an hour later 7574 returned light engine to St Blazey.

On the afternoon of June 24th 25224 was noted at Exeter St Davids with a weedkilling train, it was later berthed in some nearby sidings.

At about 2pm on June 28th 25224 with a weedkilling train was parked in the sidings at Exeter St Davids.

On July 20th 25224 was noted at Exeter stabling point. At about 3pm 25224 came of the stabling point with two empty milk tanks, headed for Hemyock.

On December 9th 25224 was noted at Exeter stabling point. 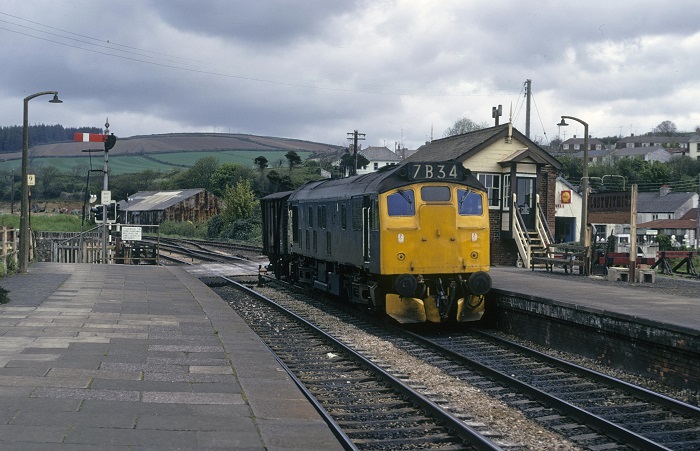 Photograph courtesy Roger Geach.
25224 passes through Lostwithiel on May 1st 1975.
The Battle of Britain LPS 'Atlantic Coast Express' railtour on May 17th utilised 1063 from Paddington - Exeter St Davids - Meldon Quarry - Crediton where 25224 & 25161 then covered the route Crediton - Eggesford - Barnstaple Junction - Torrington and the return to Exeter where 1063 was waiting to return the railtour to Paddington.

25224 was noted at Okehampton on December 10th with a lengthy train of short wheelbase vans and also worked the 2B84 20.15 Exeter St Davids - Newton Abbot. 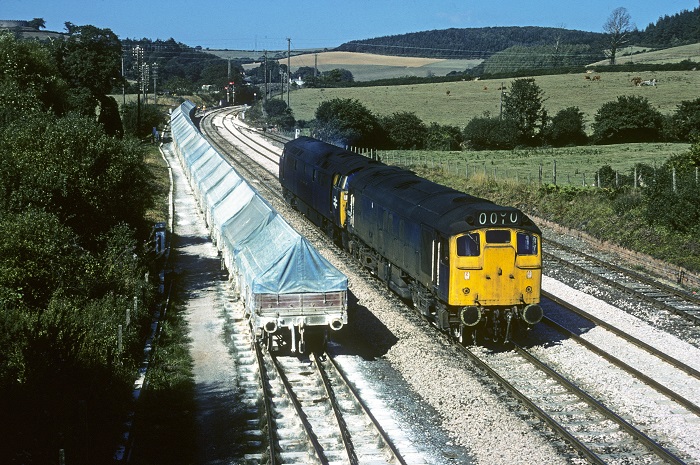 Photograph courtesy Roger Geach.
At Lostwithiel on a very hot September 6th 1976 Class 52 No.1056 failed on the china clay for Fowey, 25224 was used to drag the Western off the failed train.

On a very wet September 14th 25224 ran light from Moorswater to Liskeard to shunt the yard. 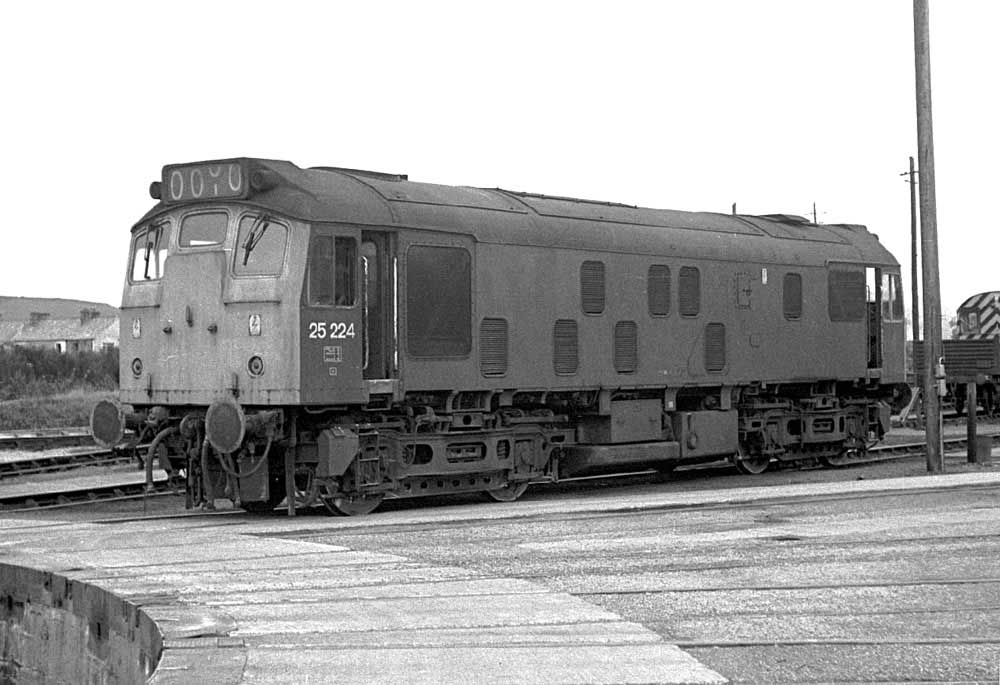 Photograph courtesy Tony Sayer.
25224 spent seven years on the WR from 1971 - 1978 allocated to Laira, being equally at home on local passenger workings or the many freights covered by St Blazey depot. Seen here September 15th 1976 in front of the turntable at St Blazey depot.

On November 13th 25224 worked the 5Z21 14.15 Barnstaple - Exeter empty coaching stock. This stock was destined for Clapham Junction with 33020, but this locomotive appeared to have some sort of problem.

25224 was noted at Barnstaple on July 13th with a parcels van and possibly attached to a diesel multiple unit (unless they were sharing the platform).

25224 was noted at Exeter stabling point on December 23rd.

After six years seven months allocated to Laira 25224 was transferred north to the Stoke Division (D05) during May, this transfer probably prevented 25224 from being an early casualty on the Western Region two years later. Now based in the Crewe area it would be frequently used on the Crewe - Cardiff passenger services.

The Crewe - Cardiff passenger workings for 25224 would be many, shortly after its transfer from the Western Region it was noted on these services on May 29th, 30th and June 2nd, 4th and 17th.

25224 was noted at Crewe Diesel Depot on the early morning of August 16th. 25224 was noted on Crewe - Cardiff services on August 26th, 30th, September 6th, November 5th (services operating south of Hereford due to engineering works) and December 2nd.

On the morning of April 9th 25224 was noted at Wolverhampton steel terminal.

From August to October 25224 was at Derby Works for a General Repair including making good some fire damage. The No.2 cab was replaced, with the center lampbracket and other fittings missing from the No.2 cab from this overhaul until withdrawal.

On the evening of November 2nd 25224 was noted at Crewe on a down freight. 'The Stoneliner' railtour on November 24th from Paddington to Westbury was worked by 25224 & 25027 over the route Parson Street, St. Phillips Marsh, Lawrence Hill, Avonmouth, Bristol Parkway, Tytherington and return to Bristol Temple Meads.

25224 was noted at Exeter stabling point on the morning of November 27th.

The year closed out with heavy rains leading to flooding from December 27th in many areas. The Berks & Hants line was closed at Laverton, as was Box Tunnel and the WR Bristol line at Saltford. On the SR the Weymouth line was closed at Yetminster, with the Exeter route closed at Crewkerne and between Chard & Axminster. The Barnstaple and Looe branches also went underwater. The Central Wales line was closed south of Llanwrtyd Wells, whilst the Hereford - Newport line was cut in two places, at Ponthir & Pandy, trapping 46040 on the 12.25 Crewe - Cardiff. 25224 on the 11.30 Cardiff - Crewe was running an hour late due to heating problems, whilst 25055 on the 16.02 return encountered moderate flooding at Woofferton. The Class 46 was finally released from its impoundment early on December 29th. Also closed were the Rhondda & Rhymney Valley lines and a weakened embankment on the South Wales main line west of Neath led to single line working.

On October 8th 25224 was stabled at Cardiff Canton.

A Euston - Bridgnorth special on December 20th worked forward from New Street behind 25221 & 25224 running via Sutton Park, Dudley & Stourbridge, services in the area were somewhat in turmoil due to freight train derailments at Barnt Green & Rowley Regis.

There is an absence of 25224 on the Crewe - Cardiff line services during the second half of 1981.

1982
Early in 1982 25224 spent a little time in Scotland, on a bitterly cold snowy January 7th 25224 was noted passing Markinch with a southbound rake of ballast hoppers, presumably from the Clachard Craig quarry a few miles further north near Newburgh, on February 26th it was on the Dundee - Glasgow circuit, whilst on March 5th & 6th it worked the 10.14 Perth - Motherwell with 25037, though on the latter day both Type 2s failed near Gleneagles.

25224 made two summertrips over the Cambrian lines during July. On July 3rd 25224 & 25133 worked the 7.38 Shrewsbury - Aberystwyth and 10.07 Aberysywyth - Euston to Wolverhampton. And on July 28th 25224 & 25167 worked a roundtrip Derby - Aberystwyth day excursion, however the recent reduction of run-round facilities at Aberystwyth caused problems to the regular diesel multiple unit service when this excursion arrived late.

Despite the loss of the Scottish allocation of Class 25s they were still frequent visitors to Glasgow, 25224 worked the 17.30 Glasgow - Carlisle on October 20th & 21st, presumably having worked in on the 12.50 Carlisle - Glasgow? More normal power for these services over the GSW featured eth equipped Class 47s.

On February 12th 25224 was noted at Llandudno Junction with Presflows from Bangor to Penyffordd cement terminal near Wrexham. On February 28th 25224 worked the 08.01 Crewe - Cardiff and 11.50 return, this was a Monday's only turn due to the regular Class 33 being required for crew training.

During the summer season there were no recorded workings of 25224 on the scheduled Aberysywyth services. However it did work a relief Llandudno Town - Euston service as far as Crewe on August 10th. 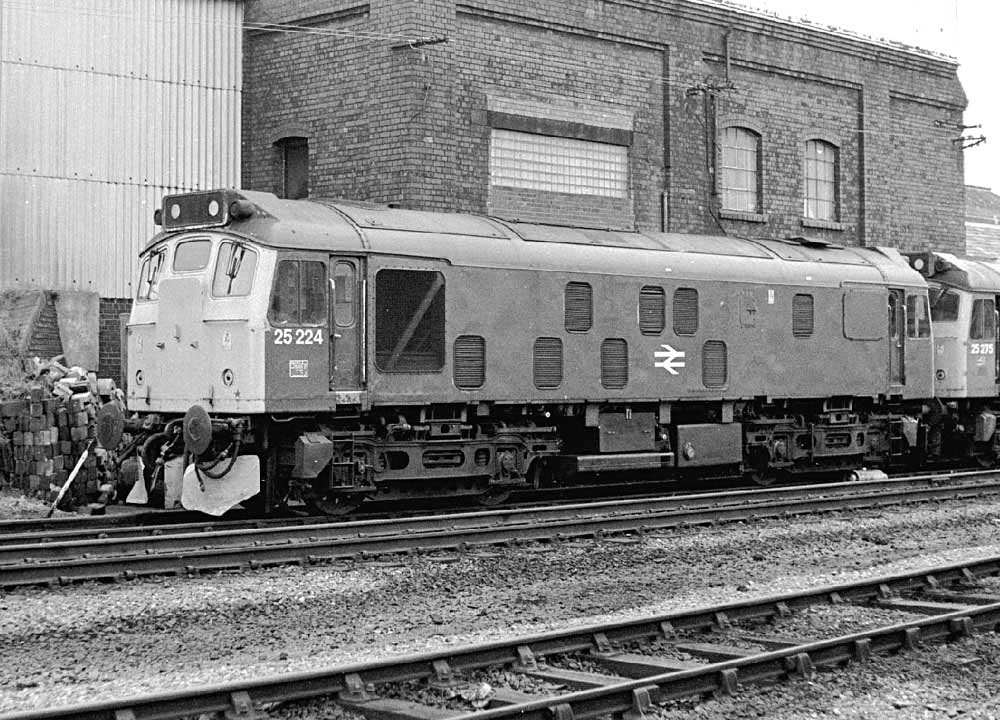 Photograph courtesy Tony Sayer.
New Year's Day 1983 finds snow plough equipped 25224 resting over at Tyseley. Along with 25042, 25224 would be one of the last vacuum braked only Class 25s to remain in service.

25224 was noted at Rhyl with an engineers inspection saloon on October 24th, the steam heating was in use.

On April 7th 25042 & 25224 had railtour duty, working the "Knotty Northern Circular" between Stafford & Leeds and return.

On June 4th 25224 was noted at Manchester Victoria.

25224's solitary trip over the Cambrian during 1984 occurred on July 7th, again attached to 25042. They worked the 07.35 Euston - Aberystwth forward from Wolverhampton, bringing back the 14.00 to Shrewsbury, which was extended to Birmingham, though the Class 25s came off at Wolverhampton. On July 16th 25224 was stabled at Nottingham Carriage sidings. Scottish adventures took place on July 23rd/24th with 25224 taking over the 20.50 Carlisle - Perth at Mossend Yard. Perth turned the locomotive out for the 24th's 01.05 Perth - Aberdeen. After fuelling here it was sent out on the 04.49 to Elgin & Inverness, where its passenger wanderings came to an end.

25182 & 25224 were noted passing Abergele with ballast empties for Penmaenmawr on August 31st.

25224 was noted at Winwick on October 26th with a short engineers train (two vehicles and a brake van).

After its mid-summer Scottish wanderings 25224 started over nine hundred miles of passenger work between Carlisle and Glasgow Central between December 4th & 8th. Round trips were completed on 5th/6th/7th, a Carlisle - Glasgow leg was worked on 4th & 8th. During 1984 this was the longest consecutive number of days that a Class 25 was on passenger duties. And finally post-Christmas travellers on December 28th had 25224 on the 09.20 Crewe - Lincoln, as far as Derby.

On December 18th 25224 was southbound at Winwick Junction with an engineers train.

25224 passed southbound through Crewe station on August 14th with a short engineers train. 25224 was noted northbound at Whitacre Junction with a freight on August 22nd.

On April 5th 25224 was noted at Crewe station with a southbound parcels train. On April 30th the three vehicle 3E16 Sutton Park PCD - Curzon St, Peterborugh parcels was worked by 25224.

25224 was noted at Peterborough stabling point on May 3rd and at Bristol Bath Road depot on May 7th. 25224 was stabled at Crewe on May 12th.

25224 soldiered on until the start of the summer timetable, being withdrawn on May 8th 1986 and stored at Crewe. 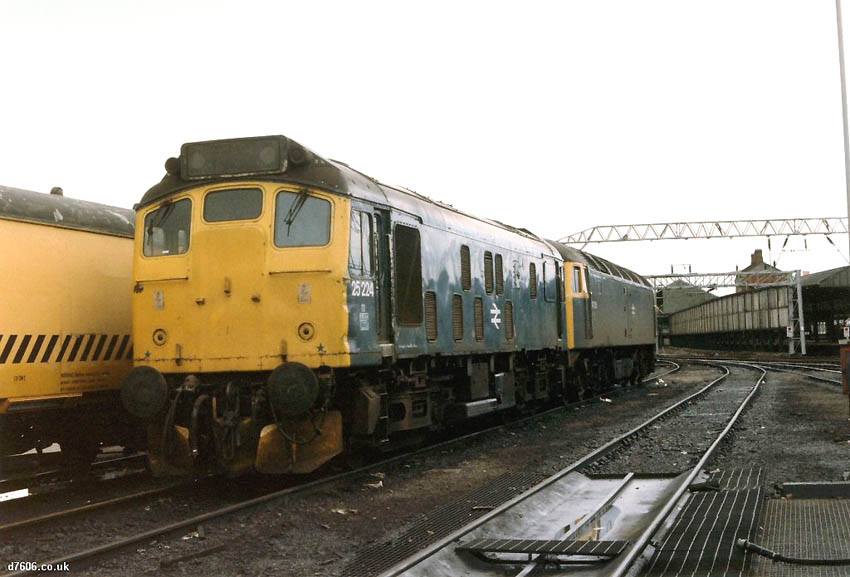 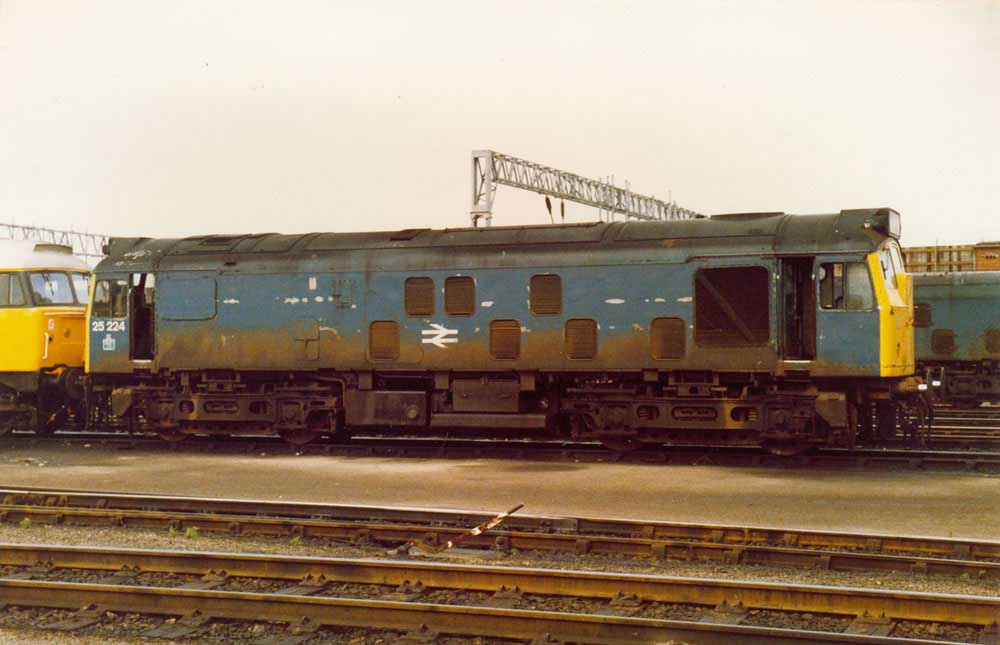 Photograph courtesy Stephen Houlker.
Its Sunday July 27th 1986 and 25224 has been dumped at Crewe for about two months, slowly surrendering parts to the dwindling active members of the class. The missing paint on this side of the locomotive is clearly visible.