25313 received an 'E' exam at Tyseley during November.

On September 2nd 25313 was noted at Edge Hill with a permanent way train.

On the early afternoon of September 29th 25313 was noted on a permanent way train at Northampton.

In early November the BR/LT diesel multiple unit service north of Rickmansworth suffered from leaf-fall on the section of line that climbed through the Chilterns. A number of Class 25s, including 25313 (4th) and 25251 (6th) were used to assist northbound diesel multiple units, the commuter service being considerably disrupted.

At about midday on June 16th 25313 was noted westbound at Guide Bridge with a mixed Class 8 freight and was later noted that evening at Buxton depot. 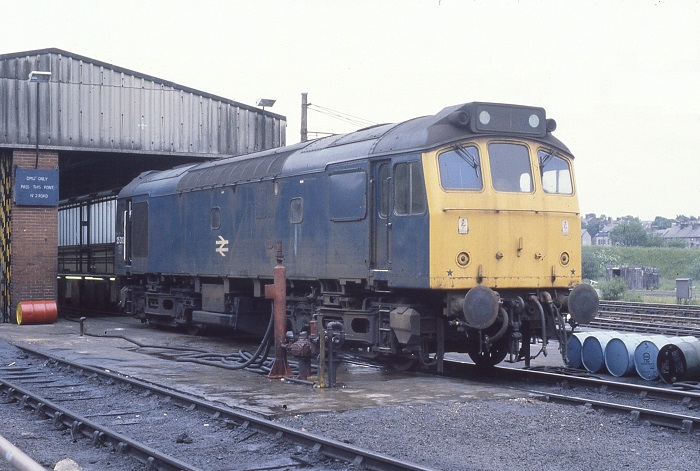 25313 & 25326 were noted northbound through Madeley on August 3rd with the Stewartby - Liverpool 'Fletliner'.

N4 repairs were carried out to 25313 at Derby during August.

During the early hours of November 21st 25313 was noted at York station.

The surplus of Type 4s and the recently arrived Class 31s on the Midland did not prevent the use of the Class 25s on some odd workings during August. Passenger services featured Class 25 haulage, August 13th’s 8.28 St Pancras – Nottingham saw 25313 assist 45138 from Bedford, whilst the next day’s 08.10 St Pancras – Leicester used 25326.

The 1M26 16.05 Leeds - Carlisle on September 7th was hauled by 25313, the inbound working had arrived behind 47113, presumably Holbeck had a more profitable use for it than to send it back to Carlisle on a 'local' working. 25313 was noted at Gateshead depot on September 10th and would later work empty coaching stock from Heaton to Carlisle Upperby. On September 11th 25313 worked a Newcastle - Carlisle mixed freight which included 55002.

On April 2nd (the Easter weekend) the Settle & Carlisle was used as a diversionary route for the WCML. 25313 was noted southbound with a ten bogie coach parcels train, being either the Stranraer - Euston empty vans or the 08.14 Perth - Red Bank vans. On April 7th 25313 was noted eastbound at Warrington Low Level with empty Cartics. The next day (8th) whilst en-route to Parkeston, 25313 came to the rescue of the 14.53 Cambridge – Harwich Town diesel multiple unit (E51298/E56468) which had failed at Six Mile Bottom. The passenger service was cancelled upon reaching Ipswich two hours late, allowing 25313 to return to Parkeston to take up the 20.53 Speedlink service to Widnes. 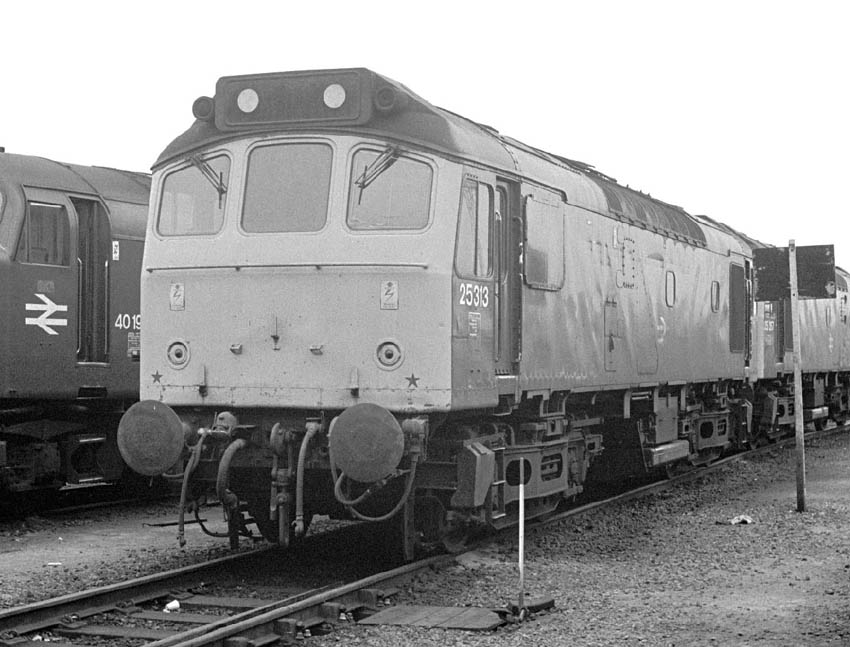 Photograph courtesy Tony Sayer
Its a dull June 18th 1983 as 25313 attached as ever to another Class 25 await its next turn of duty from Toton.

25313 with the Manchester binliner was noted southbound at Agecroft on July 1st. On July 12th 25313 was noted at Skelton Junction running round the Northenden cement empties. 40131 & 25313 worked the westbound BOC tank train from Broughton Lane to Ditton July 16th.

On Boxing Day 25313 was stabled on London Road curve, Derby.

1984
During January 25313 was moved to Longsight, then on to Bescot during July.

25313 was noted at York on March 18th with loaded bogie ballast wagons. 25313 worked the 6C65 12.45 Glascoed - Severn Tunnel Junction on March 22nd, comprised of three vans. 25313 was the Manchester Victoria station pilot on March 26th. 25313's first passenger haulage in 1984 was believed to be on March 30th when it rescued an ailing Class 47 at Bolton whilst working the 10.16 Barrow - Nottingham, taking the train forward to Manchester Victoria.

More haulage occurred on May 13th when engineering work required 25313 to assist 85008 and its Euston - Liverpool service between Northampton & Coventry.

The summer dated Cambrian line services saw two visits by 25313. On July 21st it worked with 25279 the 07.44 Shrewsbury - Aberystwyth, returning on the 10.10 to Euston as far as Shrewsbury. A month later on August 18th it was with 25268 on the 10.10 Euston - Aberystwyth forward from Wolverhampton and returning with the 17.05 to Shrewsbury. Ten days later (28th) it covered for a failed diesel multiple unit on the 15.40 Carlisle - Newcastle service.

25313 was stabled at Birkenhead on September 23rd.

25313 & 25316 were noted southbound past Springs Branch with shortwheelbase oil tankers on May 1st, probably headed for Stanlow.

WCML diversions over the Settle and Carlisle on May 3rd saw 25313 on standby duty at Blea Moor. Later the same day 25313 & 25316 took forward the 12.05 Bristol - Edinburgh relief from Carstairs. Although the summer dated Cambrian line services were now in the hands of Class 37s the unadvertised 1G82 16.05 Saturdays only Shrewsbury - Wolverhampton featured Class 25 haulage during the early part of the season, on May 25th 25313 & 25195 were in charge - this was the 13.40 ex-Aberystwyth extended due to late running.

July 9th proved to be a banner day for 25313 in the north-west, due to a diesel multiple unit failure it covered two Manchester Victoria - Blackpool round trips.

Date?? 25313 was noted running round its train at Warrington, headed to Arpley Yard with T69 which was the Folly Lane trip (?) with ICI tanks and salt hoppers in tow.

25313 was noted northbound at Kingsbury Junction with a freight on August 13th. 25313 continued to soldier on rescuing a Worcester - Birmingham New Street diesel multiple unit at Stourbridge Jct on August 19th.

25313 was transferred to Crewe during September, its last transfer. 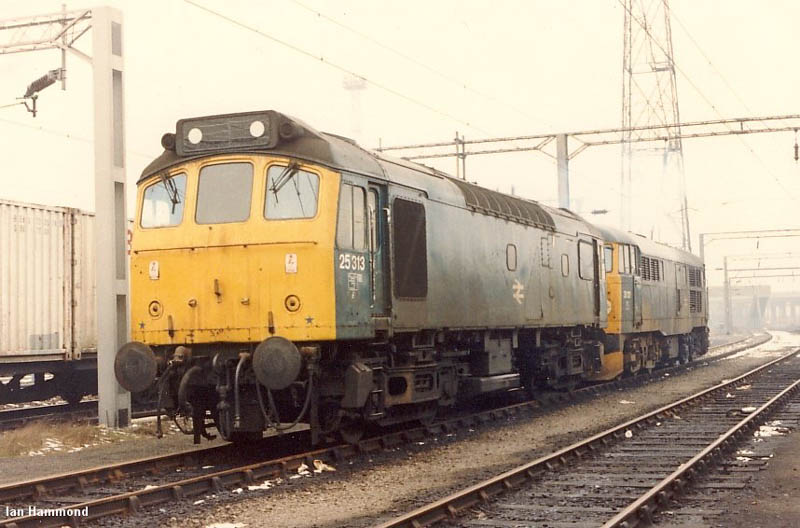 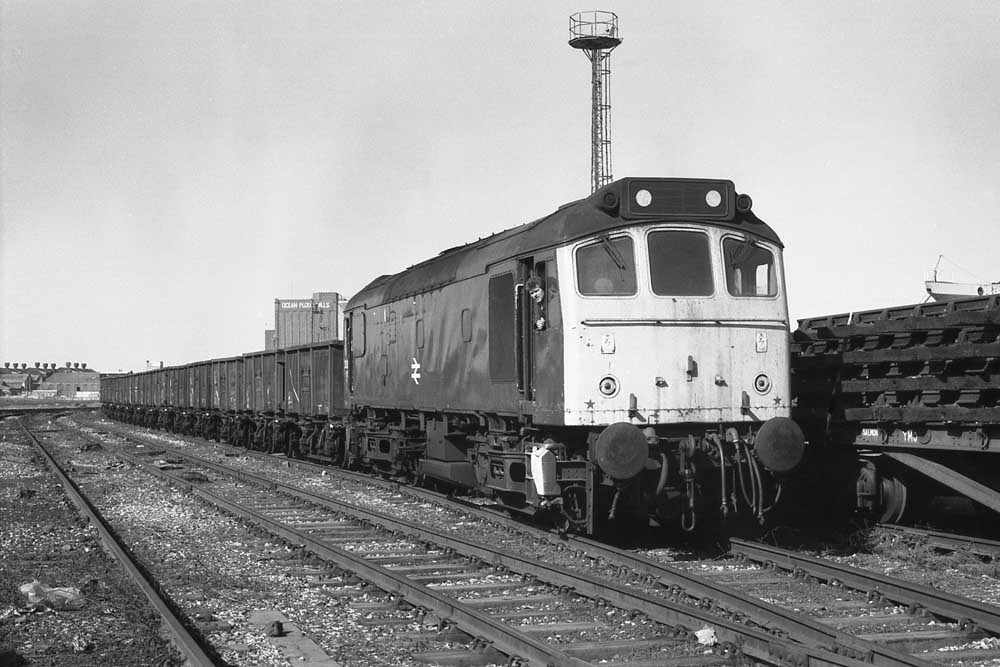 Its March 19th 1986 and Driver Gary Wilson leans out of the second man's side of 25313 at Duke Street Sidings, Birkenhead, as Guard George Boyland walks back to get the train ready. Having worked in 6F19 from Ellesmere Port and then gone on to Birkenhead North to drop off a couple of ballast wagons at Moreton Sidings, 25313 is now back at Duke Street at the head of 8L10 - the Ellesmere Port ballast trip. Today Target 10 will convey 30 loaded ZDVs weighing 827 tons (including the locomotive) on a short trip to Helsby where the wagons will be left before being taken forward to Ince Moss tip by another of the Civil Engineer's trips. By this time the Class 25s were becoming less common and, on the following day, Target 10 was being used for driver training and was headed up by 31119. (Details courtesy Mark Coyle).

On July 23rd 25313 worked a Carlisle - Tyne Yard freight. 25313 was noted southbound at Warrington Bank Quay with a train of track panels on July 29th.

August 20th saw 25313 turned round at Hereford having arrived on a Carlisle – Severn Tunnel Junction freight, going back north with empty tanks for Stanlow. 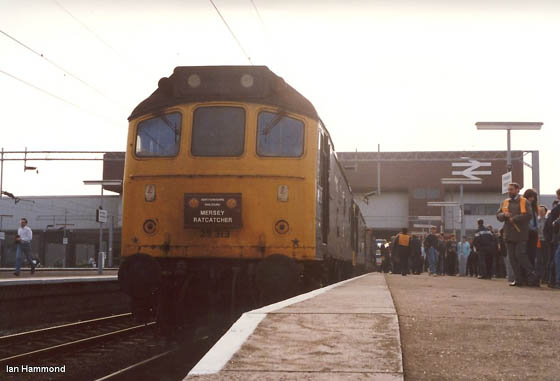 Photograph courtesy Ian Hammond & Nick Ross
25313 & 25249 wait to be uncoupled from their train at Birmingham International whilst working the final Class 25 hauled railtour, see below.

Four Class 25s took part in the very last Class 25 railtour, Hertfordshire Railtours ten coach ‘Mersey Ratcatcher’ (1Z30) of September 28th. The tour started in Euston behind 25313 & 25249 running as far as Birmingham International where 86237 took over for the trip to Birmingham New Street. This odd move was created due to construction at New Street closing the west end of the station making run rounds difficult. 25313 & 25249 came back on the train heading off to Leicester, Derby, and over the Hope Valley line to Manchester and Liverpool Lime Street. Here 25904 & 25910 made the short run down to Crewe, via Chester, where the original pair took up the final run to Euston via the Trent Valley line, completing a day of 490 miles of Class 25 haulage. Both 25313 & 25249 would continue in service into 1987, both reached Vic Berry’s during the summer of 1987, for 25249 it was the end, the more fortunate 25313 would reach preservation.

25313 was noted at Warrington Arpley on October 3rd.

1987
For 25313 the New Year was spent in the Llandudno area, by the afternoon of January 8th it was at Wigan, three days later (11th) it was noted at Warrington. On a snowy January 15th 25313 was stabled at Rugby station with a good quantity of snow on the No.1 end buffer beam, it was to work a turn to Llandudno Junction on the 16th. The following morning (17th) it was at Willesden to work the 1A02 to Bletchley and the 3L49 to Camden Carriage sidings. On January 23rd 25313 worked the empty Cawoods coal containers from Ellesmere Port as far as Hereford. By the early morning of 24th it was at Shrewsbury followed by a trip to Machynlleth.

On March 13th 25313 assisted 47532 on 07.07 Newcastle - Liverpool forward from Manchester Victoria. On 16th it spent time in the Liverpool area before working the 4J15 to Red Bank Carriage Sidings after which it worked the 1P55 to Barrow and 5J55 to Red Bank. During the morning of 17th it worked a trip to Bolton and the 1H07 19.34 Bolton - Mayfield vans. Newton Heath and Manchester Victoria were visited on 18th before being sent to Crewe arriving in the evening where it was promptly withdrawn.

(With thanks to Neil Cannon for making available the TOPS reports for 1987).

Distinguishing Features
BIS side: scrape marks about top of bodyside window height, about one third length of bodyside: at least May 1978 until withdrawn.
No.1 & No.2 cab fronts: carried 25313 in center of cab at same height as the marker lights: at least July 1986 - until withdrawn.