During the first week of June Cricklewood based 25315 was having adventures in the West Country leading the empty coaching stock of the 15.45 Lympstone Commando - Birmingham down the Exmouth branch, train locomotive 46004 was attached to the rear. 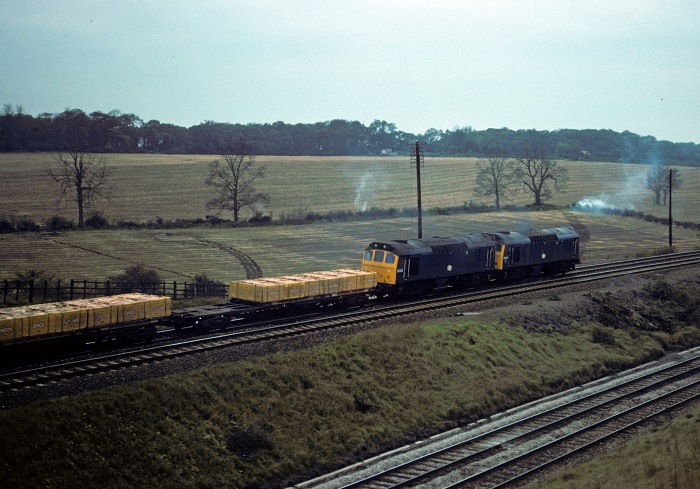 Photograph courtesy Roger Geach.
25315 & 25312 with the northbound loaded brick train on the fast lines at Sharnbrook on October 26th 1977.

25315 & 25270 had a couple of busy days in the middle of August, on 19th working the 09.19 Manchester Piccadiily - Yarmouth as far as Lincoln, and coming back with the 09.19 ex Yarmouth. Two days later the same pair worked a round trip Leicester - Skegness.

On October 16th 25315 was light engine westbound at Guide Bridge.

1979
25315 was noted westbound at Newport with a short freight on February 6th and was later seen at Margam.

25315 was back at Derby Works during August & September with power unit (N1) repairs.

Noted shortly after midday on April 3rd (Maundy Thursday) were 25315 & 25316 working a Redlands Mountsorrell - Radlet stone train. On the afternoon of April 8th 25315 was noted northbound at Linslade light engine.

On the morning of October 28th 25315 was northbound at Watford Junction with the Kings Cross - Tring cement empties.

1981
January 19th found 25315 in trouble on the northbound Fletliner, suffering a seized traction motor at Wellingborough. Assistance arrived in the shape of 47149, replacing the defective Class 25 and sister 25326.

During the first week of August 25315 was active in the Exeter area, on 3rd being noted on a Barnstaple service.

25315 was transferred to Toton during November, the same month it was noted at Derby Works for N6 repairs. On December 13th it was noted on the 02.25 Euston - Bletchley forward from Watford Junction.

25144 was noted stabled at Nuneaton on the morning of March 2nd, along with 25262 & 25315, whilst two other pairs of Class 25s passed through the station. A scene that would not be repeated for much longer as the infestation of Class 31s into former Class 25 territory continued.

25315 was noted southbound at Preston with the 5J42 Carlisle - Red Bank parcels empties on April 12th.

On June 22nd 25315 was noted on a Tunstead to Oakleigh ICI limestone working.

25315 & 25286 were stabled at Birkenhead Mollington Street on August 1st, then later the same day noted southbound at Crewe with a train of UKF fertiliser PWA vans.

On August 19th 25315 was noted at Euston on the parcels side. 25315 assisted three services between Watford Junction & Willesden on August 22nd due to engineering work requiring the power to be turned off.

On September 3rd 25315 made very heavy weather of the eleven coach 07.36 Northampton – Euston, the slow line was taken at Ledburn to allow the Class 86 powered 07.46 ex Northampton to pass!!

On November 3rd a diverted freightliner service was noted northbound through Hereford with 25315 & 25303. 25253 & 25315 were noted passing Stoke on Trent with a train of sand from Oakamoor on November 16th. 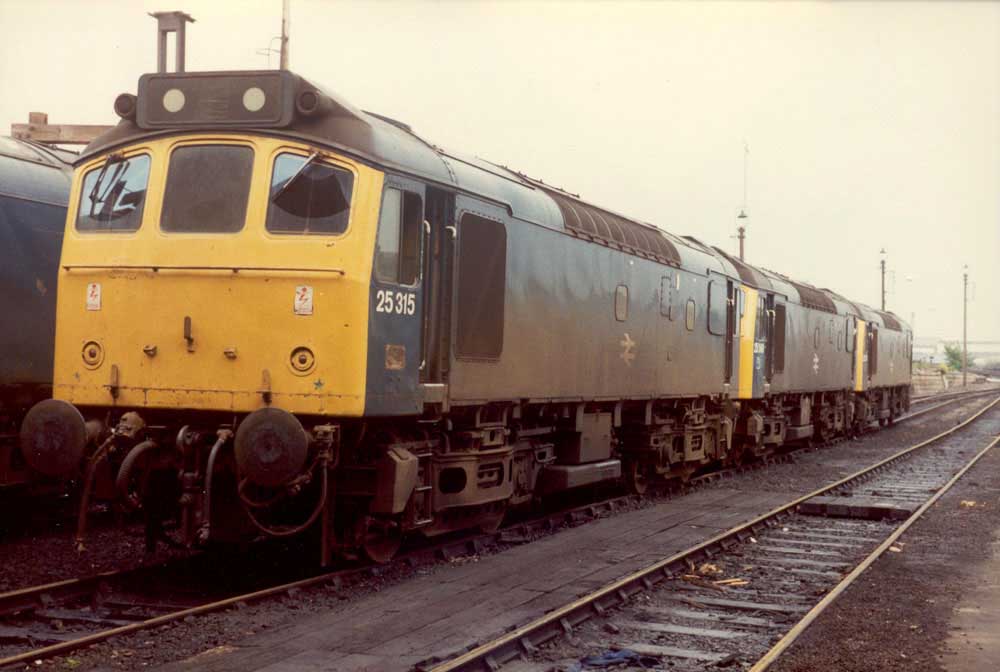 During July 25315 was transferred to Crewe. On July 7th 25315 was noted at York depot. On July 9th 25303 & 25315 were noted passing Wolverhampton with bogie oil tankers. At month end it was noted assisting an electric service between Bletchley & Rugby, the power was off for engineering work. 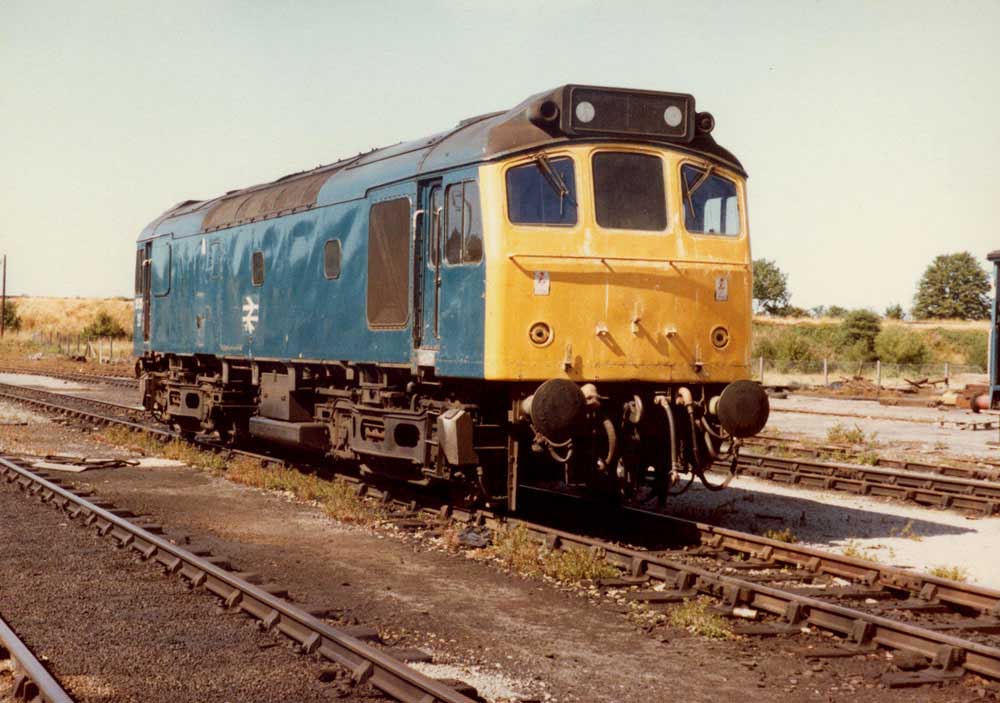 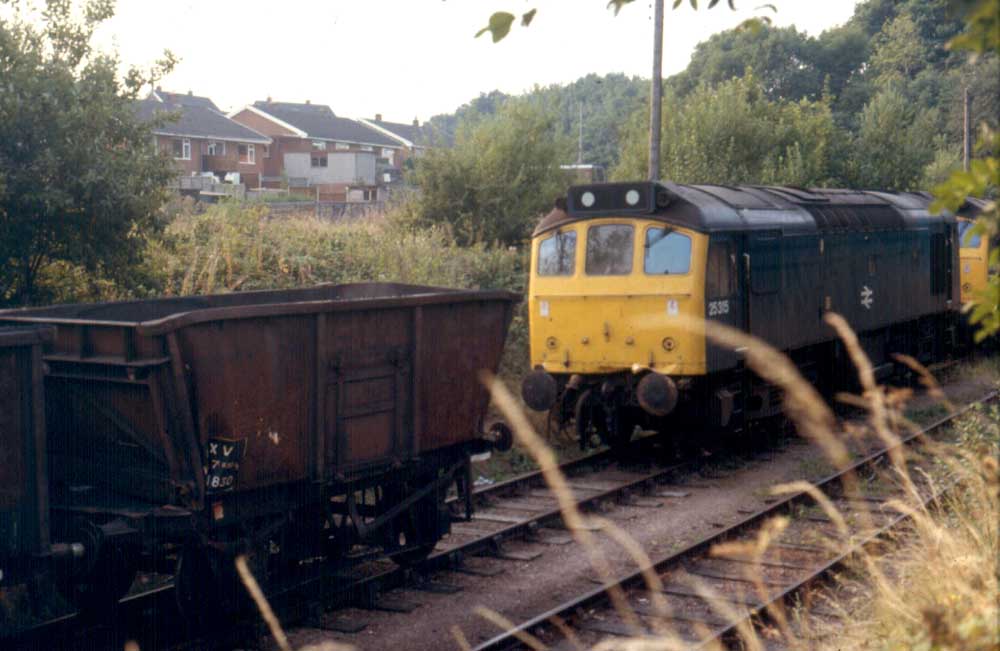 Photograph collection of webmaster.
25315 at Gatewen Colliery on August 19th 1983 under interesting cicumstances. The coal wagon has sustained some bodywork damage and the Class 25 has minor damage to the cab front at the bufferbeam level. The damage was quickly repaired and repainted, at least by September 22nd 1983.

During the week before Christmas 25315 was noted on December 20th hauling an unadvertised Euston - Hemel Hempstead service, again power was off due to overhead line damage.

A phenomenon involving the Class 25s was their popularity with a dedicated enthusiast following, one such group, the Midlands based ‘Rat Roadshow’ were usually found in various states of dereliction on many Class 25 hauled excursions and scheduled service trains. As evidence of their dedication to the cause an un-official headboard was frequently carried by the locomotive, one occasion being May 26th, when 25315 & 25037 worked the 07.44 Shrewsbury - Aberystwyth and coming back with the 10.10 to Euston as far as Wolverhampton. 25315 would appear twice more this year on the Cambrian services - the following week (June 2nd) with 25265 and on June 9th with 25288, in both cases covering the same diagram as operated on May 26th.

25315 was light engine northbound at Bescot on October 19th. On October 27th 25315 and a short freight were southbound at Carpenders Park.

Christmas Eve travellers in North Wales had the delights of 25315 on an afternoon Llandudno Town - Scarborough service, the Type 2 replaced at Manchester Victoria by a Class 47. 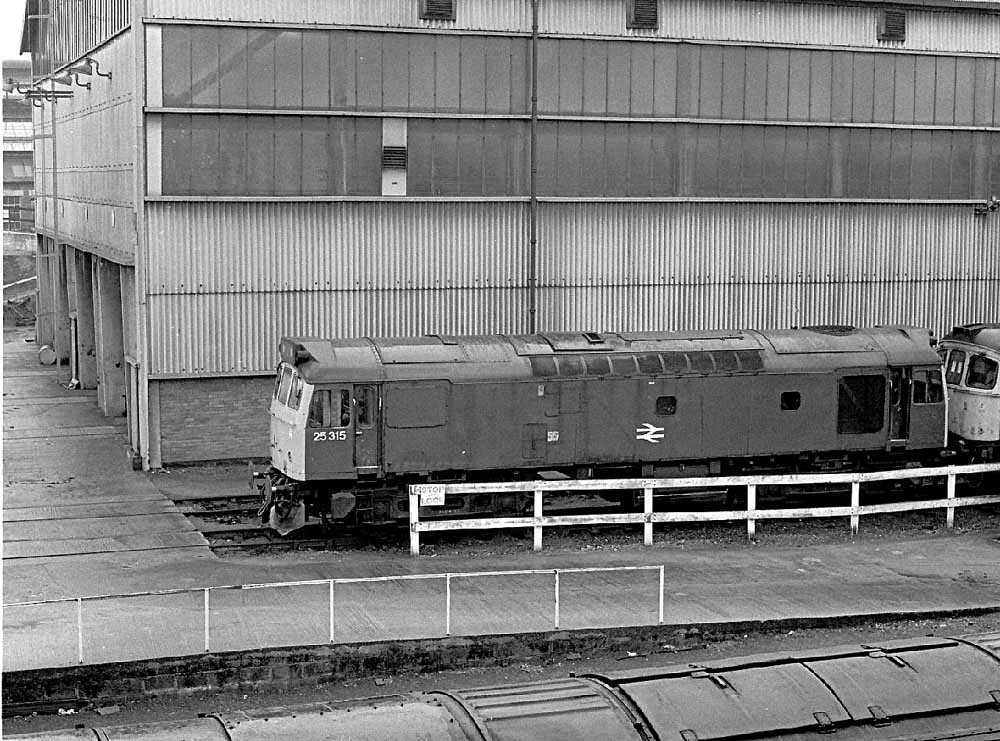 25315 was noted northbound at Derby on June 13th with a freight train.

25315 (leading) & 26015 were noted on the 6B68 15.10 Inverness - Millerhill freight on July 10th, reportedly the last occasion that a Class 25 visited Inverness. The freight was to be placed in the Up loop at Greenloaning to allow the 1B36 Inverness - Edinburgh to pass, however the freight was too long so was shunted over to the Down line to allow the passenger train to pass.

A diesel multiple unit failure on September 10th found 25315 covering the 07.47 Carlisle - Newcastle throughout. On September 12th 25315 with a train of empty flat wagons was noted passing Acton Bridge. On September 21st 25315 was noted at Chester depot. On September 29th?? 25315 worked the 06.16 Barrow - Manchester Victoria service.

On October 2nd 25315 worked three passenger services between Preston & Liverpool. On October 5th 25315 was noted at York with the night mail to Shrewsbury.

25315 was noted passing Healey Mills with a freightliner on November 9th. 25315 was stabled at Crewe on November 30th.

25315 was transferred to Kingmoor in November and renumbered 25910.

On May 4th 25910 was noted passing Clitheroe with an electrification train. 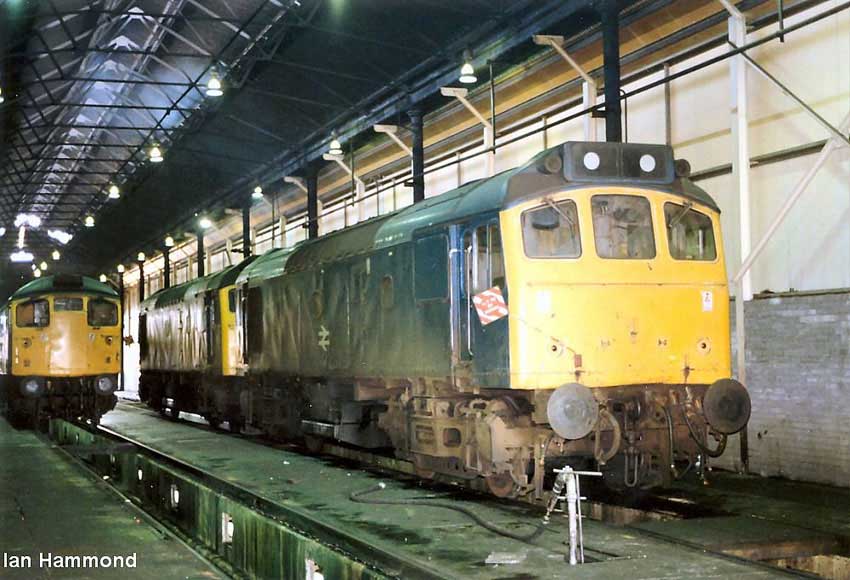 Photograph courtesy Ian Hammond.
Although in the final years the Type 2s were all allocated to the LMR they remained very active in the Scottish Region, made possible by the use of Carlisle drivers with their route knowledge north of the border. Here 25910 & 25903 keep company with 26015 at Motherwell on August 16th 1986.

The following notes are mostly from the TOPS reports for 25910 during its last three months.

The final days of 1986 and the first days of 1987 were spent in the Warrington area. On January 2nd 25910 was noted at Chester for inspection and repair having been involved in a fatality, no other details of this are recorded. On January 8th & 11th it was noted in the Llandudno Junction area. On the afternoon of 11th 25910 joined up with 25902 to work a job to Ellesmere Port. This pair would remain together at least until January 19th, working jobs in the Llandudno Jct, Crewe & Warrington areas, including on January 19th being noted southbound at Warrington Bank Quay with the rubbish (?) train.

By January 23rd 25910 had been joined to 25912 working jobs to Deanside, Winsford, Over & Wharton and Garston to name but a few - how long this pair remained together is not known. By month end 25910 was running up the miles in the Warrington area.

For much of February 25910 was recorded working in the Llandudno Jct area, though by 24th it was stopped at Crewe with a compressor fault, repairs were expected to be completed by February 25th. 25910 came to the rescue of 47540 at Colwyn Bay on February 17th after the latter failed on a Holyhead – Stratford freightliner, both were replaced at Rhyl by 47140. 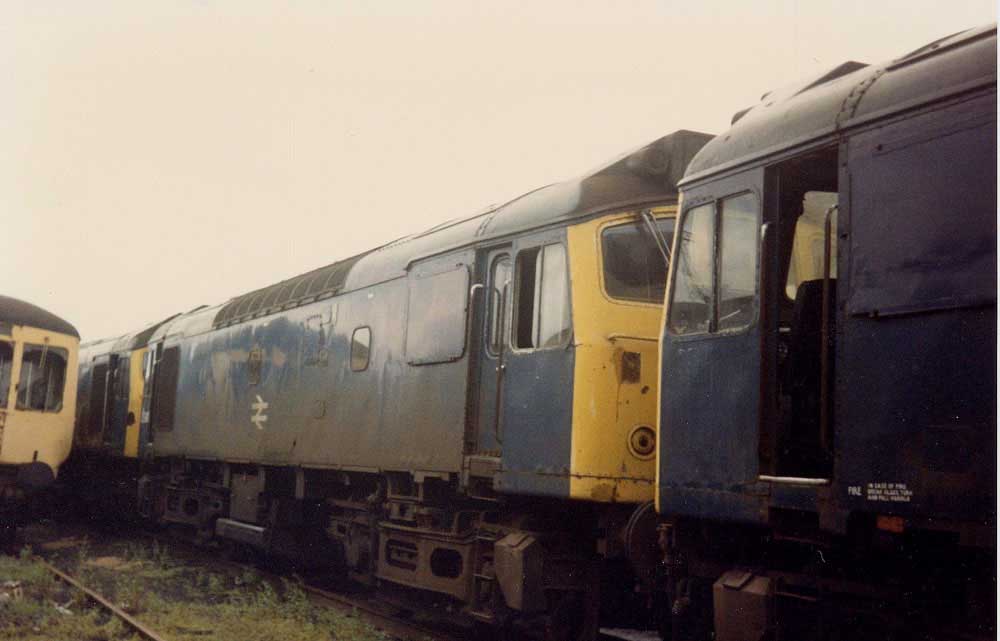 A flamecut panel from 25910 showing the number sold at Stafford Auctions for Ł200 during January 2011.

With thanks to Neil Cannon for making available the TOPS reports for 1987.