The first two locomotives in the above table were not new to Morocco, they were initially delivered to two companies in France, they eventually came under the ownership of the SNCF and were transferred to Morocco in 1946 & 1947 respectively. 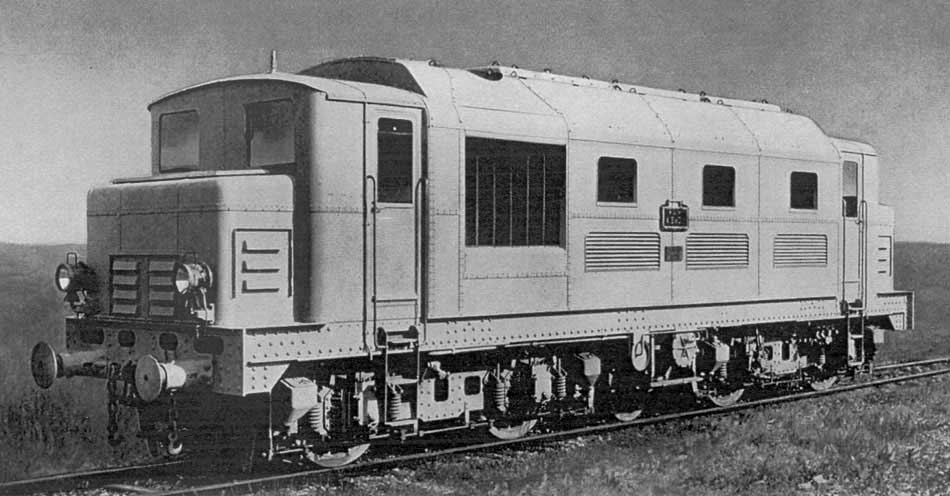 This locomotive was originally delivered to the PLM, France in 1933. It was transferred to the Mediterranee-Niger, Morocco in 1946 retaining its SNCF number 040 DA 1.
The 1933 1-Do-1

On test presumably in Switzerland. This locomotive was originally delivered to the CF Grand Ceinture, Paris, France in 1933. It eventually reached SNCF ownership in 1938 and renumbered 141 DB 1 at this time. In March 1947 it was transferred to the Mediterranee-Niger, Morocco.

This one-off locomotive is seen on a mixed train at Neb-Kat on the Colomb - Bechar line. It appears the locomotive has gained some external trunking possibly to account for the desert climate.

In 1953 an offshoot of the 040 DE class was the ordering of five shunters powered by the Sulzer 6LDA22B engine for the industrial company Soc. Lorraine de Laminage Continu (Sollac). The first of this type were built by Homecourt (now known as Cie Des Forges et Acieries de la Marine et de St Etienne), with the electrical equipment supplied by Cie Electro-Mecanique (CEM). The most obvious difference was the shortening of the length over the buffers to 37ft 8.75in, the distance between the bogie centers was 17ft 4.625in, these reduced dimensions allowing the locomotives to operate over tighter curves.

The power unit was the same as that carried in the 040 DE class - a 6LDA22B set at the same output. It was however attached to a CEM single main bearing generator and auxiliary generator. A 96 cell SAFT cadmium nickel battery was used to motor the generator to start the engine. The four nose-suspened single reduction gearing traction motors are permanently coupled in series.

Despite its shorter length the weight remained at 68tons, for the work they were intended for no expense was spared in providing a substantial frame to carry the typical loadings found in steelworks shunting. Likewise the outside plate frames of the bogies were 40mm thick braced by center transoms of the same thickness. This was a non bolster bogie with center pivot & flat sidebearers running with plain bearing Diathermix axleboxes. The locomotive was so designed that four tons of ballast could be added if neccessary. Starting tractive effort was 46,000lb, one hour wheel rim tractive effort was 27,500lb at 6.2mph, continuous was 23,000lb at 7.5mph. Maximum speed was 18.6mph, at which wheel rim tractive effort was 9,150lb. Fuel tank capacity was 220 gallons.

From this original design three of this type were built in 1955/1956 at the Saint-Charmond factory for the Chemin de Fer Mediterranee-Niger in Morocco, numbered 030 DB 1 - 030 DB 3 and powered by the 6LDA22D series engine.