With the withdrawal of the Westerns in 1977 Laira had acquired a small fleet of Class 47/0s to handle the overnight passenger, sleeper, TPO and newspaper traffic that required steam heating. As the stock used on these services was converted to ETH and diagrammed for Class 50s the number of 47/0s at Laira decreased. On Fridays during the winter of 1979/1980 the 18:30 Paddington – Plymouth was still steam heated. The normal air-conditioned set worked the faster Fridays Only 18:27 Paddington – Truro, and the 18:30 used the steam heat set that worked in during the afternoon on a Fridays Only working from Plymouth. With both turns worked by Exeter crews it became a regular turn for a Laira Class 46, with the Exeter crews taking the locomotive to and from Raneleigh Bridge for re-fuelling.

A promotion at work required a move from Exeter to London in January 1980 because of a new court opening in Acton. Initially we worked at Knightsbridge where I arranged to travel up on the first Exeter – Waterloo on a Monday and return on the 13:00 Waterloo – Exeter on a Friday. At this time Waterloo and Salisbury crews were learning the Class 50s on these two trains and some of the running was quite vigorous. Although I meant to stay on each week and catch the 18:30, I kept putting it off and regrettably never travelled on it. 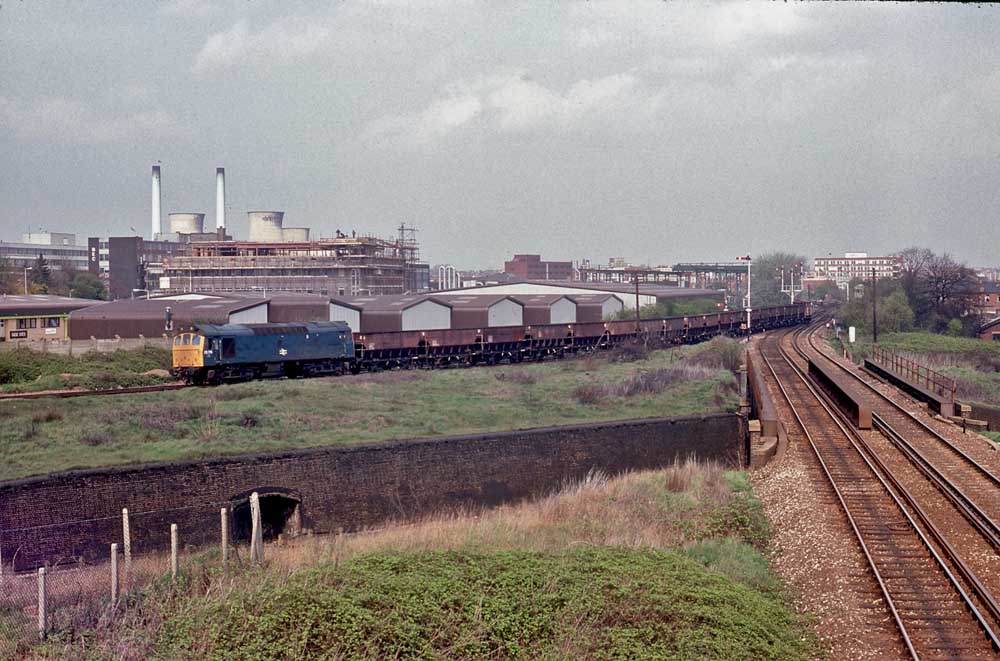 With Willesden Power Station in the background, 25176 on the 05:30 Toton East Yard – Acton Yard has arrived at Acton Wells from Brent and is descending to East Acton Junction on April 8th 1981. 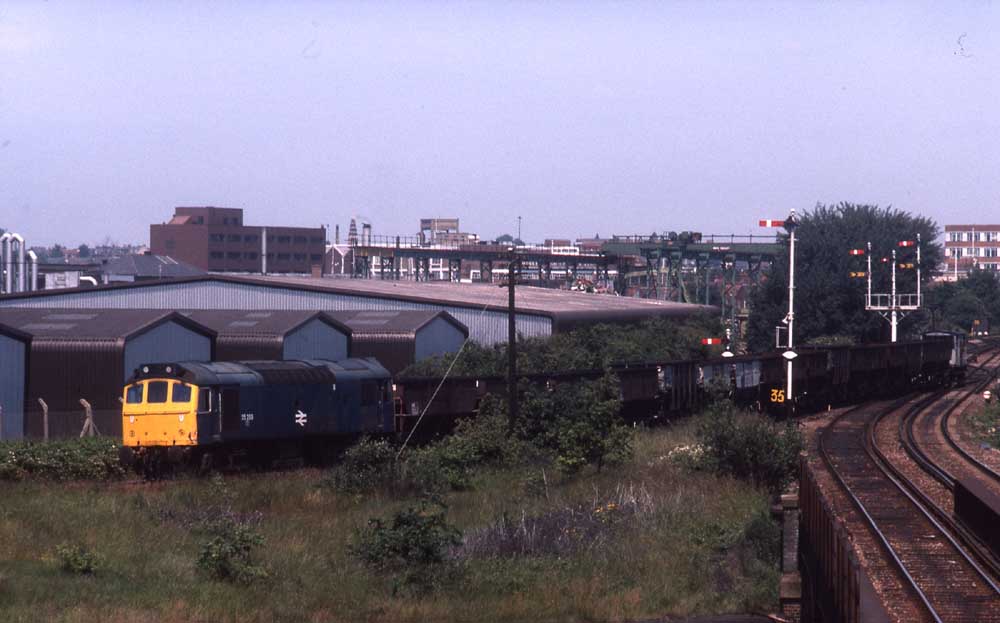 Photograph courtesy Peter Lovell.
Having joined the North London Line at Acton Wells Junction from Brent (behind the guards van) 25299 on the 05:30 Toton East Yard with its motley collection of coal wagons, turns off and heads for Acton East Junction on June 22nd 1981.

Once at Acton one of my new colleagues was also keen on trains and we soon found some of the local vantage points for photography. One of the most interesting was a footbridge over the Richmond – Broad St North London Line just where it crossed over the WR mainline out of Paddington. On the other side of the main line the North London line split at Acton Wells Junction, the right hand line carrying around to Willesden and Broad St while the line to Brent Yard went off to the left. There was also the line that dropped down from Acton Wells Junction to East Acton Junction on the WR main line. In addition to a Richmond - Broad St service each way every twenty minutes an intensive freight service was carried on this section. From the footbridge we would regularly see Class 25/31/33/37/45/47/50/56/59 and 73 locomotives. 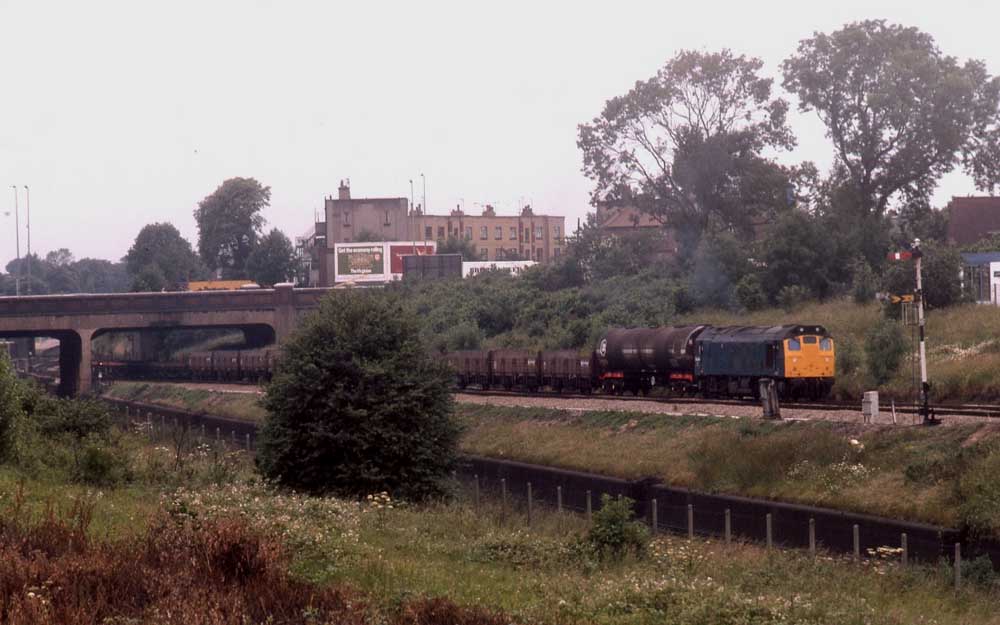 Having worked into Acton Yard with the 05:30 Toton East Yard 25054 heads back to Brent as it climbs from East Acton Junction up to Acton Wells on June 27th 1981. 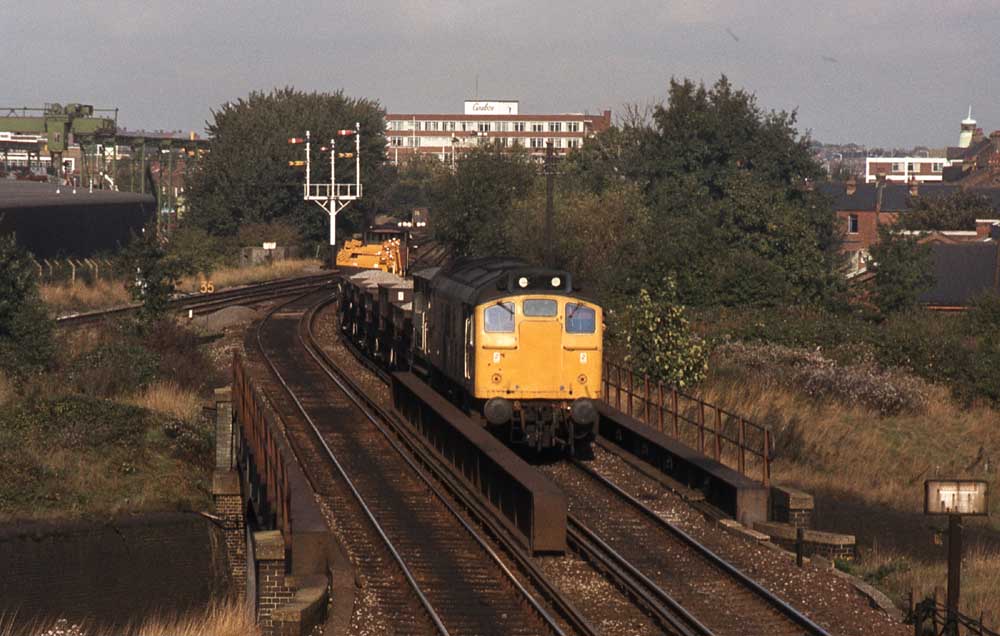 On October 11th 1984 25235 crosses the Western Region mainline and heads for the Southern Region with an engineers train.

In addition to the court at Acton there was also a small satellite court at Willesden, actually in Harlesden beside the line from Cricklewood to Acton Wells Junction. There was a steady stream of freight trains past the court that would make the building shake as they passed. I regularly needed to travel to Willesden from Acton, a journey of great railway interest. After crossing the A40 the route was up Old Oak Lane. On the right was Wormwood Scrubs, a piece of open land at the back of the prison offered open views of the WR main line. Subsequently the now redundant Eurostar depot was built on this land. After travelling past the entrance to Old Oak Common depot with views of locomotives stabled around the turntables the road crossed over the North London Line and joined another road that ran parallel with it for about half a mile to the approach of Willesden South Western Sidings. 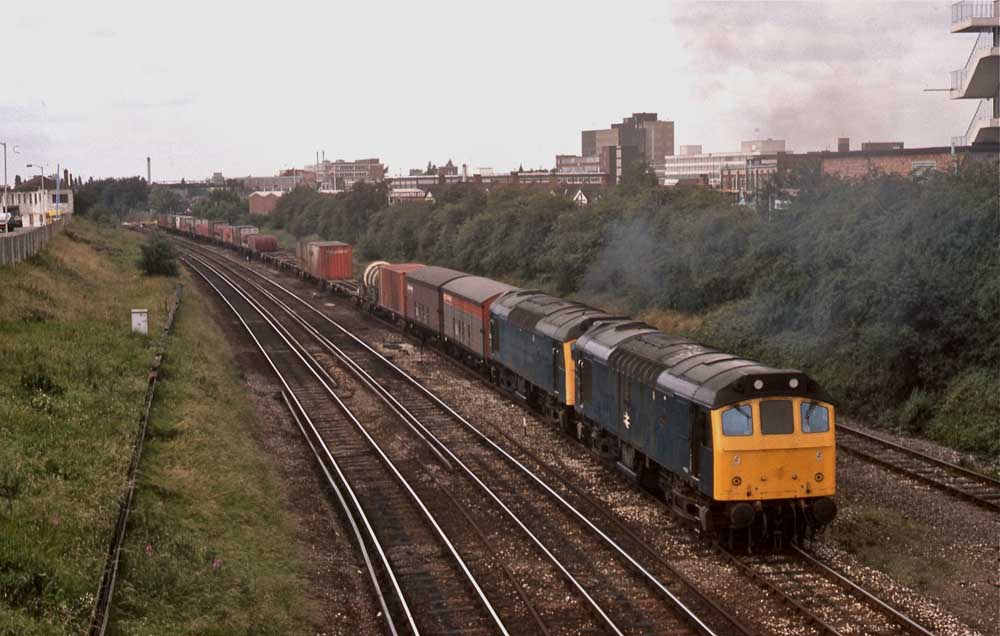 The road bridge across the North London Line provided a good vantage point for photography. On a number of occasions I would be returning from the Court at Willesden and as I approached the bridge a train would be approaching Willesden South Western Sidings. Invariably the trains would be reversing in, so I was able to hop out of the car and still get a photograph of the locomotive. 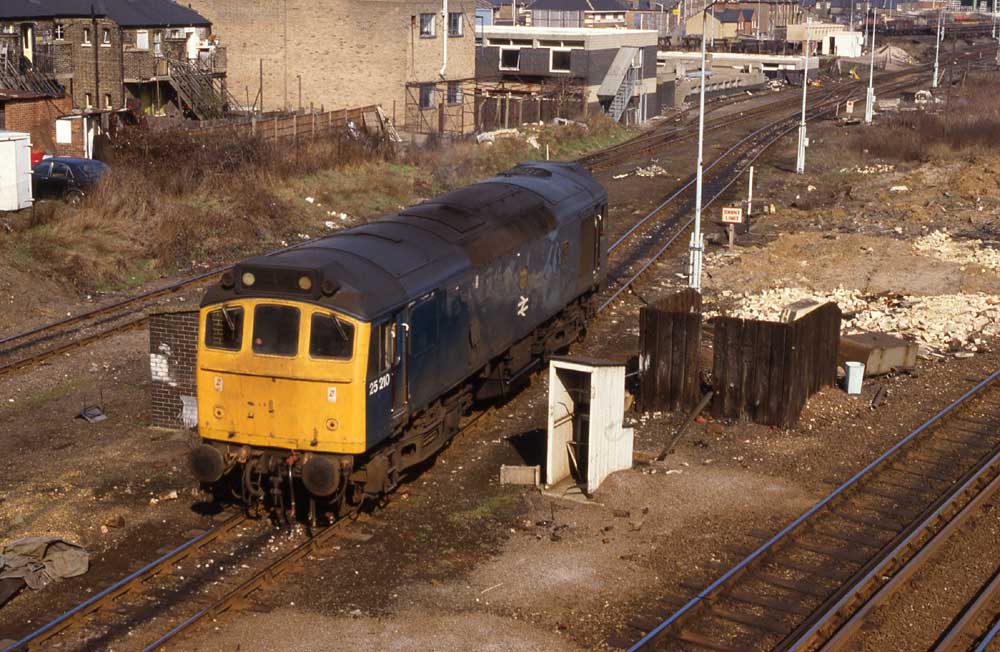 In the 1980s Willesden South West Sidings provided a connection between the West Coast Main Line and the North London Line, but the junction at the WCML end faced towards Euston so anything coming from the Willesden yards and Freightliner terminal needed to reverse in. It mainly held engineers wagons, although a pair of Class 33s would arrive most lunchtimes with a Freightliner from Southampton, returning with another Freightliner. 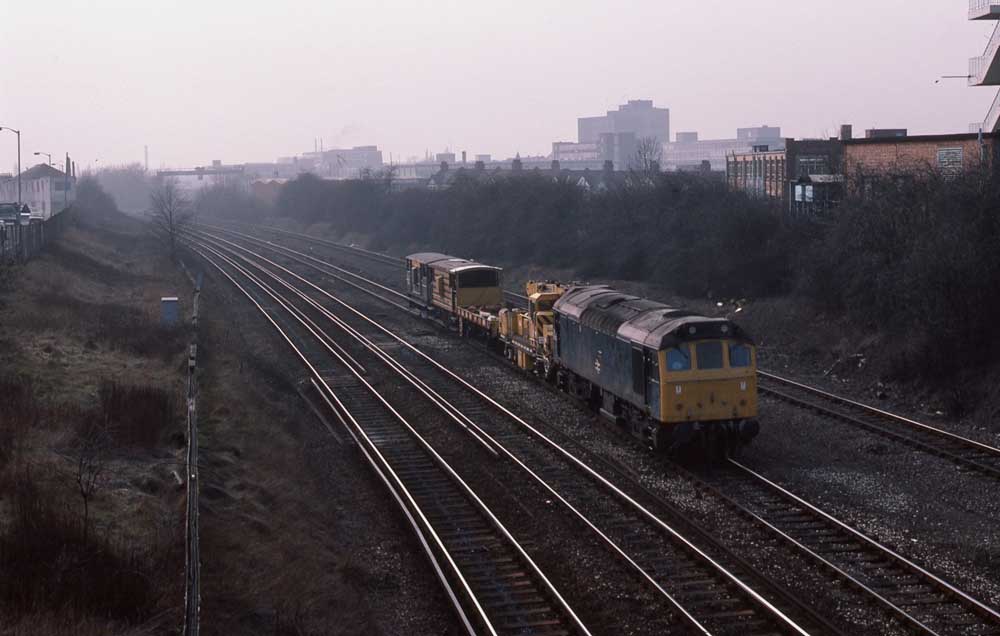 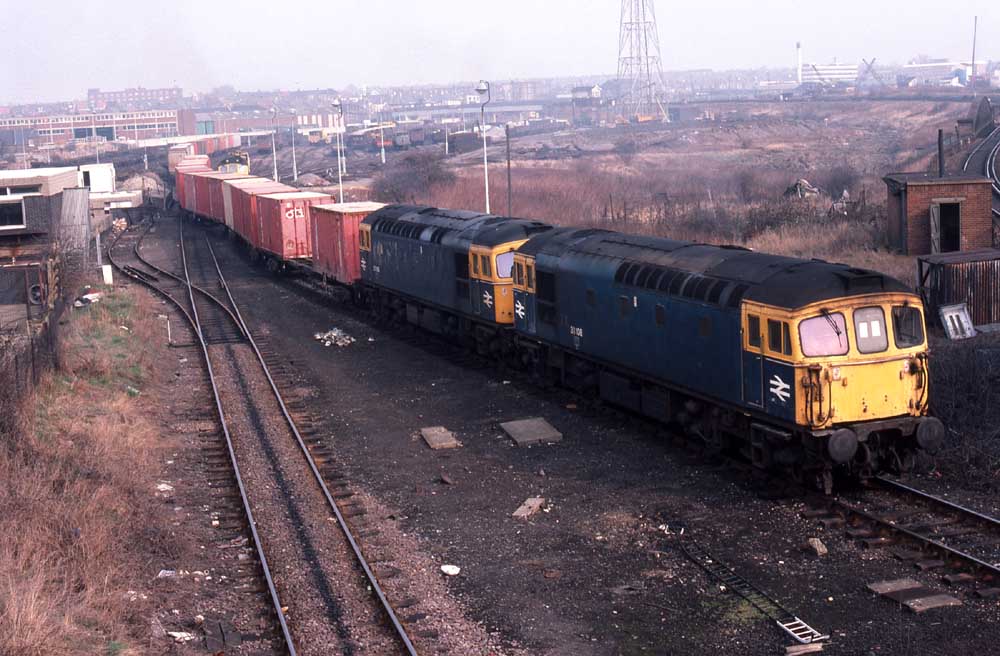 On the mainline out of Paddington

From the footbridge over the North London line we could see the Western Region main line but it was difficult to photograph any trains on it. By walking along a footpath beside the line it was possible to reach the A40 road bridge. This provided views in both directions, but as the A40 was a dual-carraigeway you had to choose one side or the other. The other problem was the slow moving traffic. The A40 was a six lane dual carriage-way that reduced to four lanes over the railway. The heavy traffic would crawl past, after an hour my face and shirt collar would be black from exhaust fumes, so I had to ration time on the bridge.

At the start of the 1983 timetable Class 45/1s started to appear regularly on the 13:07 Paddington – Liverpool providing the first regular 45/1 workings out of Paddington. With the introduction of HSTs on the Midland main-line from St Pancras the Western Region lost five HSTs resulting in some of the Bristol services reverting to locomotive hauled stock. The diagram for the 13:07 started with the locomotive coming off Bristol Bath Road Depot and working a morning service to Paddington with a Bristol crew. At Paddington a Saltley crew would take over the locomotive for the run to Birmingham New Street.

A regular turn for both Class 45/0s and 45/1s during the 1980s were the West Ruislip – Calvert GLC ‘binliners’ of containerised rubbish. These ran up the former GW/GC Joint Line from West Ruislip to Calvert via Princes Risborough and Aylesbury. At Calvert the rubbish was deposited in former brick workings. The locomotives would come from Cricklewood depot, and the normal practice after each turn was to take a short rake of container wagons back to Cricklewood for maintenance, while a fresh set would come out from Cricklewood at the beginning of the turn. The route from Cricklewood was via Acton Wells Junction, down to East Acton Junction, and along the Western Region main line before turning off for West Ruislip at West Ealing.

The West Ruislip – Calvert rubbish trains also ran on a Saturday morning. At that time the GW/GC line was very unloved by BR with suggestions that Marylebone would close, and in addition to a variety of freight workings also saw regular steam out of Marylebone. We would often go to High Wycombe on a Saturday where there was a big market to see the steam specials and other traffic.

During the 1980s Peaks made infrequent appearances at Reading on the cross-country services to the South coast via Birmingham. These were normally booked for Bescot or Crewe Class 47/4s with the locomotive diagrams covering the workings from Reading to Poole. These were handled by Reading, Basingstoke or Bournemouth men, who were not passed to drive Class 45s so they would only appear in an emergency. More trains ran on summer Saturdays, although many of these additional services would avoid the reversal at Reading General and travel via the Reading West curve with Class 47/0s or 47/3s. A better bet was on reliefs at bank holidays. These tended to run round at Reading with the locomotive off a southbound relief returning with a northbound relief. Manned by Saltley or Banbury crews using Class 45s caused no problems.

Over the years a number of rail-tours and specials produced Peaks. One of the most interesting workings was on June 11th 1985. To celebrate the 300th anniversary of the 5th Inniskilling Dragoon Guards an additional notation '1685-1985' was added to the nameplates of 45143 in a ceremony performed by the Duchess of Westminster. Surprisingly the ceremony took place at Waterloo Station. The locomotive worked up on the 05:48 from Exeter and following the ceremony worked the 13:10 Waterloo – Exeter.