25184 was noted at Kings Lynn on June 2nd, presumably having arrived with a freight from March. During 1977 Skegness was a popular destination, 25184 & 25218 were together between June 5th & June 9th, working a round trip from Leicester on June 5th and from Derby on June 7th/8th/9th from Derby. Just over a week later 25184 managed a Crewe - Cardiff round trip on June 18th.

On September 3rd 25184 was noted at Chester assisting an unidentified passenger service following the failure of a diesel multiple unit.

On or about June 12th 25184 was operating on local trips out of Guide Bridge, on 13th it became derailed at at Godley Sidings.

On the late afternoon of September 2nd 25184 was noted at Heaton Chapel on a down van train. On September 7th 25184 handled two round trips between Manchester Victoria & Bangor, a total of 400 miles.

25184 was noted eastbound through Chinley with empty stone (Tilcon?) hoppers on November 11th.

25184 was the Manchester Victoria pilot on December 31st.

The maintenance dispute in late March/early April brought many strangers into South Wales including a number of Class 25s including 25184 & 25194 on April 12th as a light engine movement west of Cardiff. 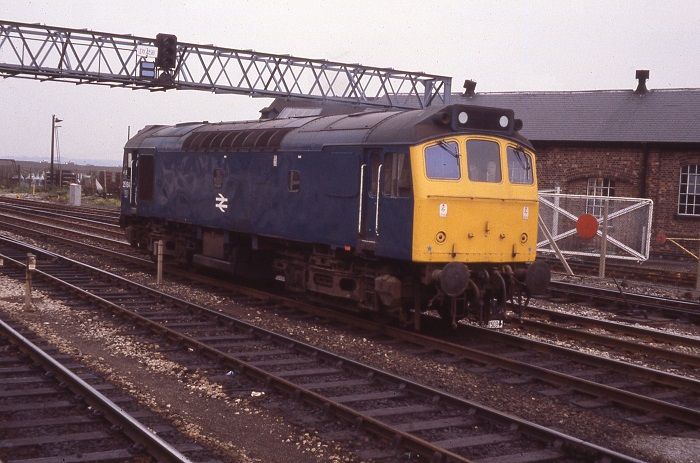 During August 25184 returned to the Cambrian lines, on August 2nd 25184 & 25276 worked the 07.40 Euston - Aberystwyth from Wolverhampton, returning with the 17.55 Aberystwyth - Wolverhampton. The next day (3rd) the same pair worked the 08.45 Birmingham New Street - Aberystwyth, returning with the 18.10 Aberystwyth - Euston to Wolverhampton. Finally on August 31st the 16.15 Birmingham New Street - Leeds was worked throughout by 25184. Happy memories for any enthusiasts in the front coach on the two NE/SW trips, with the quickening departure from New Street through the tunnel to reach Landore Street, the lengthy Clay Cross tunnel, and then the departure from Chesterfield with the climb up Bradway Bank before the continued climb into Bradway tunnel.

The only significant passenger working during 1981 took place on June 13th working the 10.35 Stranraer Harbour - Kilmarnock and the 13.43 return. 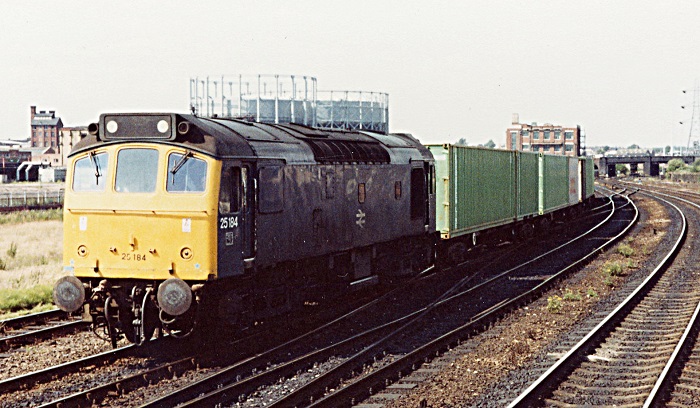 On the afternoon of August 4th 25184 was noted at Llandudno Junction with up tanks headed for Holyhead.

On the morning of December 8th 25184 was stabled at York. Also on shed at the same time was 47409 which would later work the 13.53 York - Liverpool Lime Street and would derail shortly into its journey at Copmanthorpe, with at least twenty injured. The cause was a broken rail. 47409 was noted at York depot the next morning.

During April & May 25184 was stored unserviceable whilst at Derby Works, it was reinstated during May to Longsight.

25184 was stabled at Coventry station on August 8th.