The continuing shortage of power on the WR allowed many strangers to reach deep into WR territory, the 18.00 Riverside – East Usk frequently featuring pairs of Class 25’s, November 14th produced 25193 & 25073.

In the early hours of June 6th whilst waiting on the slow lines with a coal train at Nuneaton station 25286 witnessed the high speed derailment of the 5th’s 23.30 Euston – Glasgow sleeper service. The two locomotives, 86006 & 86242 became parted, with the latter causing considerable damage to itself and the station, bringing down several gantries that caused minor damage to the Class 25. All the coaches were derailed, with damage being heaviest at the front of the train, tragically six lives were lost. By the evening of 6th the Bescot, Crewe & Saltley cranes were present alongside other engineering trains, in the hands of 24074, 25179, 25193, 25256 & 47034. Six coaches, (five sleepers and a BG) were broken up on site. By the 11th engineering/rewiring trains were still present including 24074 and 25193, the latter having been on-site since the day of the accident. Two days later only 24058 was on hand with an engineers train.

On the morning of October 19th 25193 was northbound at Uphill Junction with concrete?

1977
25193 was noted at Cardiff Canton on June 7th having arrived in the Cardiff area on a freight from Crewe.

On April 22nd the 10.10 Liverpool Lime Street - Newcastle was worked to Manchester Victoria by 40013, where 25193 was added due to problems with the Class 40. Both were removed at Huddersfield, with 40007 taking over.

On Monday December 4th 25193 worked the 09.55 Willesden to Norwood and presumably the return Norwood - Willesden. On the southbound working 25193 passed Clapham Junction shortly after midday, typical of the passing time here, though events earlier that morning had caused delays to both passenger and freight workings.

The Monday was damp and cold and a freight waiting at Latchmere signal box had been held pending confirmation from Clapham Junction that the freight would have an uninterrupted run through the section. The freight was the late running 01.00 Westbury to Salfords, reportedly loaded to something like 1,200 tons, with Class 47 No. 47123 in charge. The reason for Latchmere's request was due to the heavy train, the damp morning and the 1 in 36 rising gradient on a bend up to Platform 17 at Clapham Junction, with tight reverse curves through the station.

With the route set through Clapham Junction, this effectively blocked the Down local line from Victoria. Latchmere was advised to release the train, which it did shortly after 6am. Forward movement of the freight train was one big giant struggle, with the Class 47 under full power, showering sparks from the wheels and exhaust, its approach additionally confirmed by a deafening noise. By about 6.30am the freight had reached the start of the reverse curves on top of the bridge that carried the line over Falcon Road, just off the north end of platforms 16/17. At this point despite the locomotive operating under full power, all forward motion had ceased. The decision was made to give the route back to the Victoria locals and hold the freight, which was in danger of sliding backwards. The second man arrived at Clapham East Box urgently requesting that help be obtained to assist the freight. In response help quickly arrived in the form of 33208 from Selhurst, which had run round to Latchmere to gain access to the rear of the train. With this done the freight was authorized to drop back wrong line to Latchmere, before attacking the incline for a second time. Thus shortly after 10am the freight successfully cleared Clapham Junction, some four hours after arriving at Latchmere Junction. It is reported that Balham box noted the train had got into further difficulties at Windmill Bridge Junction, between Selhurst and Croydon. Four other freights (beside 25193) were delayed on this Monday morning.

The next day Tuesday December 5th 47123 worked the 11.00 Norwood to Temple Mills, a turn normally booked for a Class 33.

The antics of 47123 in the Clapham area continued into 1979. On Monday January 22nd 47123 worked a Special (additional) 10.55 Acton to Norwood freight, which failed at about 3pm on the bank approaching Clapham Junction, the delay amount to about thirty minutes with 33056 providing assistance. 47123 returned light engine in the path of the 13.12 Norwood to Acton.

Strangers at Norwood Junction on March 29th were 25193 & 25099 having worked from Willesden with a Manchester United football special for a match at Crystal Palace. 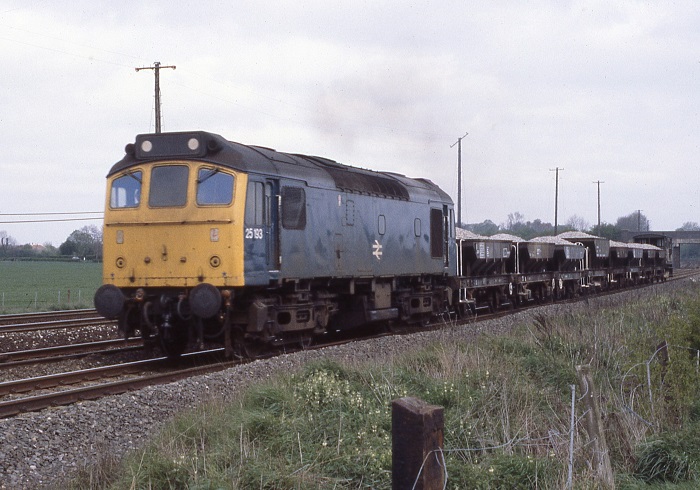 The 03.47 Willesden – Bescot freight running behind 25193 & 25058 became partially derailed at Bletchley on October 23rd. A burned off journal caused most of the train to derail, only the locomotives and several one hundred ton oil tankers remained on the rails. Electric multiple units 087 & 092 standing in the station sustained minor damage, luckily the fast lines remained open, though it would take three days to clear and repair the slow lines.

1982
The Foss Islands branch, home to the Rowntree factory saw the local trip working receive Type 1 & 2 haulage during May, including 25193 (14th) in lieu of the regular York Class 08.

On June 8th 25193 worked the afternoon Manchester - Bristol parcels. On June 12th 25193 was noted at Warrington Arpley. Another lengthy trip took place on June 27th with 25193 & 25145 working a 'Cambrian Venturer' charter from Birmingham International to Aberystwyth and return.

25193 was stabled at Toton on July 3rd and received an 'E' examination at Toton during July.

On March 26th 25193 was stabled at Skipton station with a single oil tank.

25193 was stabled alongside Peterborough station on August 27th, four days later (31st) 25193 was still in the Peterborough area handling a daily trip freight including delivering paper to a nearby St Neot's factory and household coal to the coal merchant in the station goods yard.

25193 was noted eastbound at Barton Moss on October 22nd with a parcels train on ten bogie vehicles. 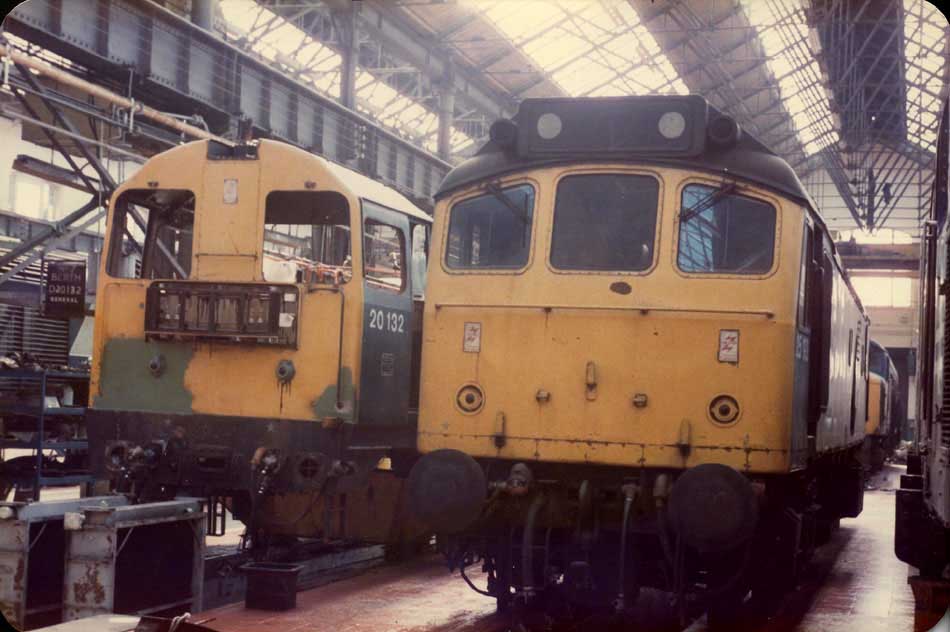