On October 19th a Euston - Barrow return Motorshow special was worked forward from Lancaster by 25196 & 25234.

On September 1st 25196 was noted passing Guide Bridge with loaded ICI hoppers and on September 2nd was stabled at Buxton. 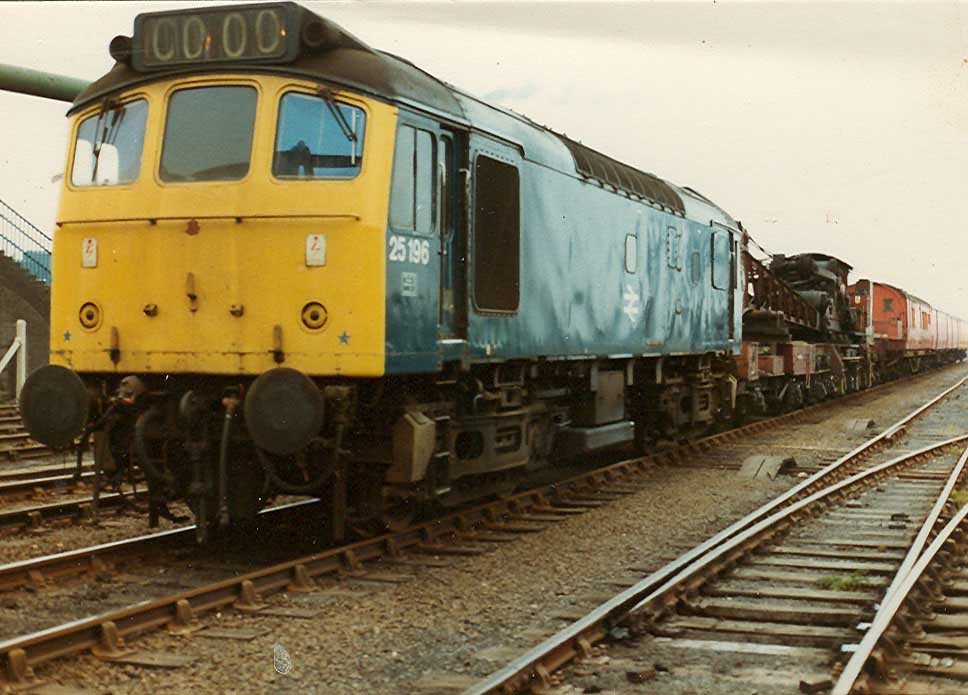 Photograph courtesy Ian Marsh
Derwent Ironworks, Workington; 25196 has arrived with a brakedown crane to rerail the errant 37006 and allow business to get back to normal (date not known, but prior to October 1979).

25179 entered Derby Works during November for a Classified repair. This including replacing the No.2 end cab roof, after release from the Works this cab roof started to lose its paint prematurely, thus becoming a notable spotting feature for this locomotive.

1980
On January 11th Trafford Park freightliner depot was blocked following the derailment of 25235 whilst picking up the 22.37 Trafford Park – Holyhead freightliner. The departure of this working finally took place at 6.00am the following morning with 47098 in charge. However all was not well with this machine for it failed at Phillips Park, requiring the assistance of the Manchester Victoria pilot, 25196.

On May 23rd 25196 was westbound at Chinley with a loaded ICI limestone train.

1982
25196 was noted passing Bescot with a vacuum braked freight service on March 26th.

On May 7th 25196 was noted southbound at Micheldever with a lengthy train of vans, possibly a Toton - Eastleigh freight, the Class 25 was equipped with three-piece miniature snowploughs.The next day (8th) 25196 worked the 14.14 Norwich - Birmingham New Street and was also noted stabled at Banbury, also noted at Banbury on May 10th.

A month later on June 8th 25196 worked the same service, but taking over at Peterborough.

25196 was receiving attention at Reddish on April 1st.

Another rescue job took place on May 2nd when the 19.30 Crewe - Cardiff failed at Shrewsbury behind 33064, 25196 worked the train through to Cardiff. 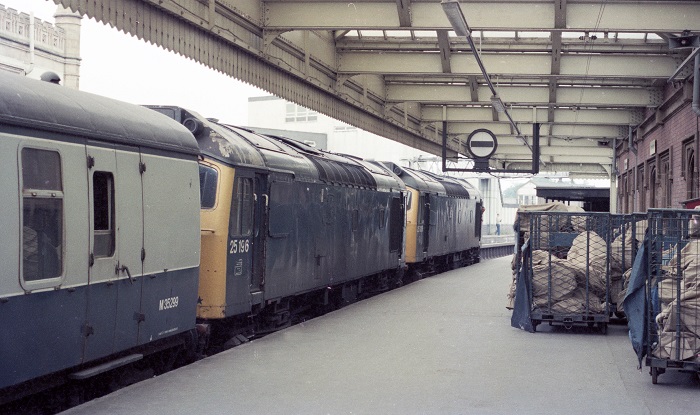 On October 27th 25196 was noted northbound at Winwick with a parcels train. 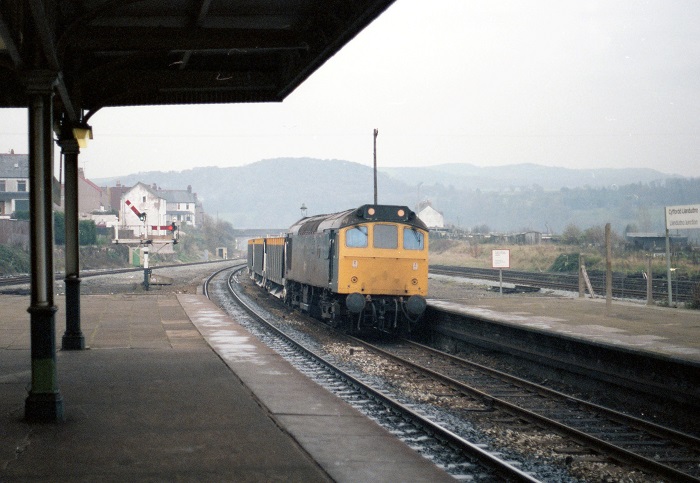 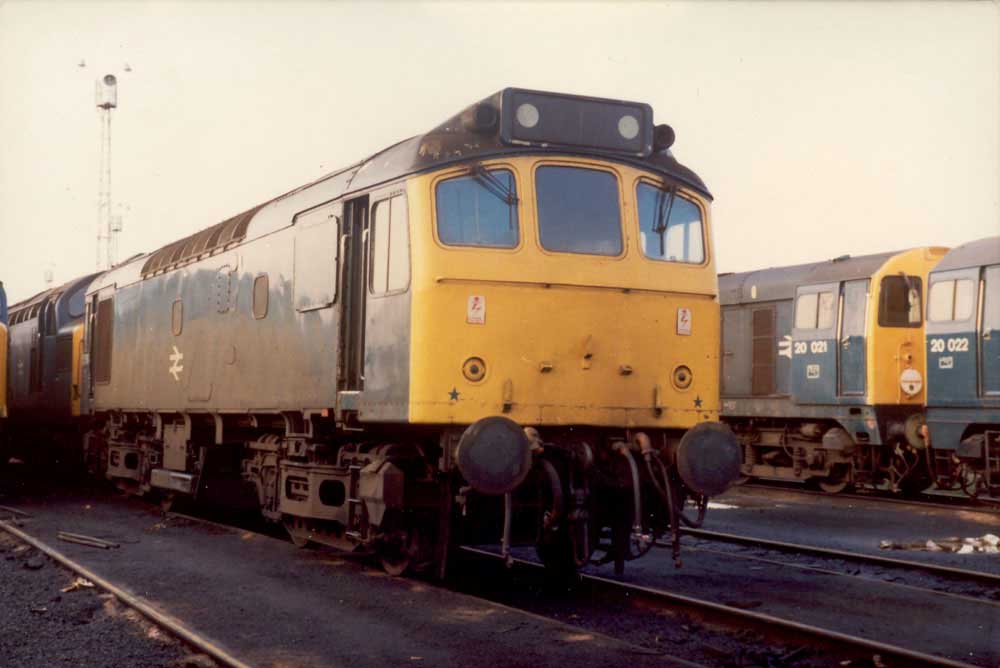 1984
25196 was noted departing Falkland Junction for Hunterston with a freight (nuclear flasks?) on April 13th.

25196 was noted at Workington with a Sellafield nuclear flask train on April 19th.

On June 11th a short engineers train, comprised of a crane and brakevan were noted at Preston hauled by 25196. On June 30th 25196 & 25234 arrived at Great Rocks Junction with ICI limestone empties.

On August 29th 25196 was noted northbound at Toton with a lengthy freight.

Almost two months later on November 9th 25196 worked the 17.32 Bangor - York from Chester to Manchester Victoria after the Class 45 failed. On November 18th 25196 was noted at Aintree with a track panel train.

1985
On January 23rd 25196 worked an Ashburys - Bescot mixed freight, being noted at Timperley with four freight wagons, a passenger coach and brakevan. On January 24th the oil trains diverted through Huddersfield due to the derailment & fire in Summit tunnel included the use of 25089 & 25178 and 25196. Their use is remarkable considering the vast array of locomotives (Classes 20/37/47/56/58) which were still idle due to the ongoing coal miners strike. 25196 was stabled at Thornaby on January 27th. 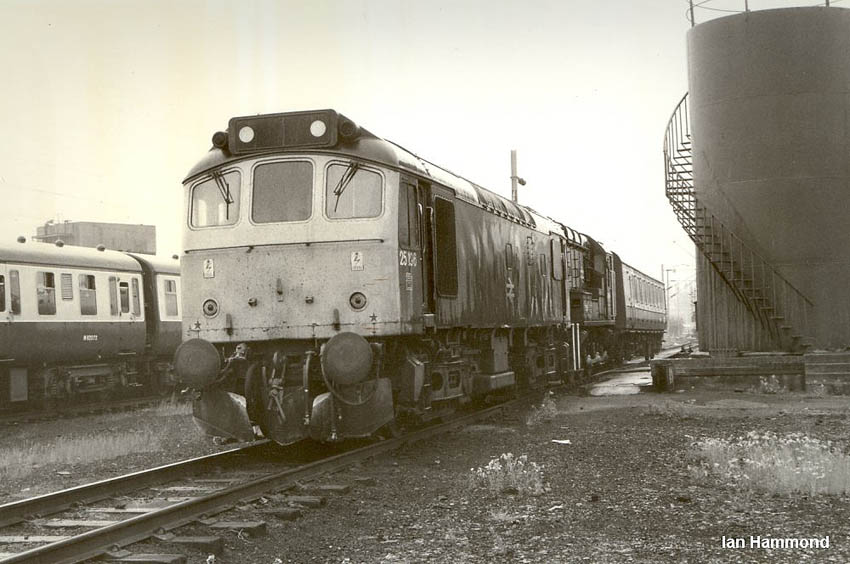 25196 & 25192 were noted southbound at Hereford with bitumen tanks on the evening of December 6th.

1986
1986 was the last year in service for 25196, three passenger workings were handled, mostly involving diesel multiple unit failures. The first occurred on January 30th when the 02.10 Manchester Piccadilly - Grimsby Town was worked to Sheffield by 25196.