25244 was on empty coaching stock duty at Liverpool Lime Street on May 2nd & 3rd.

On March 9th 25244 was noted at Manchester Victoria and later at Newton Heath.

During the early morning hours of April 30th 25244 was noted eastbound through Huddersfield with a parcels train.

During August 25244 was transferred to Eastfield.

On the afternoon of November 25th 25244 was noted at Eastfield.

1980
The Scotland v France Rugby game on February 16th drew a number of specials from Glasgow to Edinburgh, with one being hauled by 25244.

On September 27th the 'Grampian No.2' railtour with fifteen coaches utilised 25072 & 25244 between Edinburgh & Dufftown for a total of 261 passenger miles behind the Class 25s, the route being Edinburgh Waverley - Kirkcaldy - Leuchers - Dundee - Aberdeen - Keith - Dufftown - Keith - Inverness. If the Class 25s were intended to work over the Highland Line to Perth & Edinburgh, they never got the opportunity as Inverness provided 47234, which because it could not heat the train was replaced by 26033 & 26037 at Aviemore. 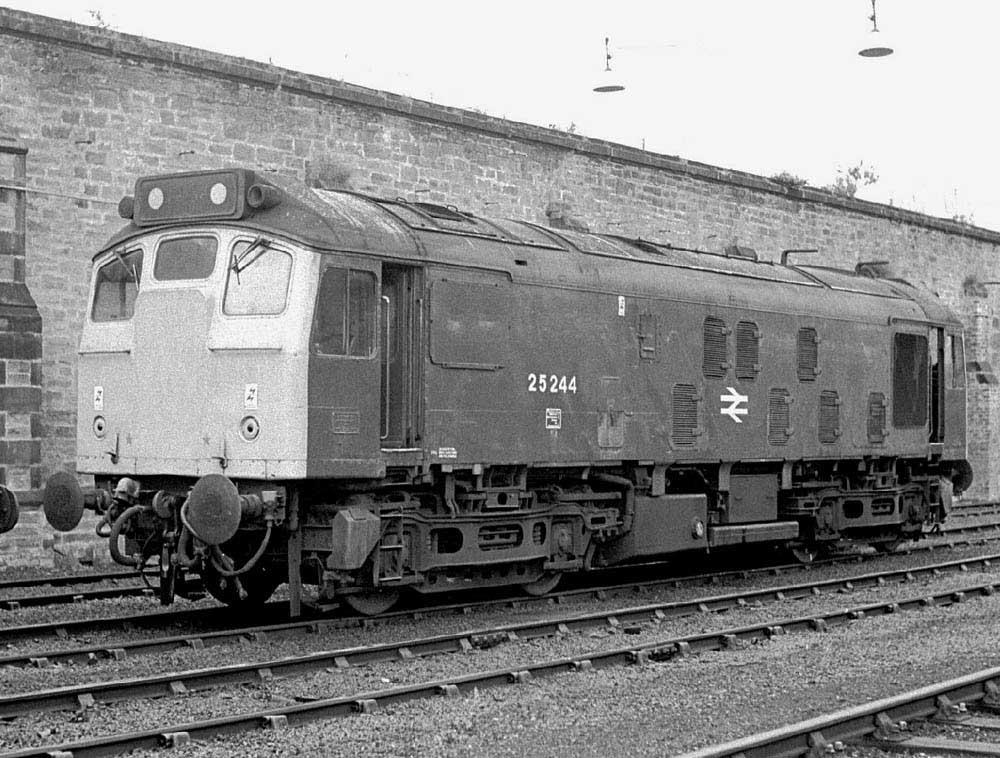 Photograph courtesy Tony Sayer.
A fine portrait of 25244 at the back of Perth station on June 13th 1981. This view well highlights the hinged air filters, unique to those dual braked Class 25s sporting the early style body.

Possibly 25244's last passenger working whilst allocated to Eastfield took place on September 17th with the 17.35 Glasgow Central - Inverness (only one locomotive?). On September 19th 25244 was stabled at Motherwell.

After just over seven years allocated to the Scottish Region 25244 transferred from Eastfield to Longsight during October. 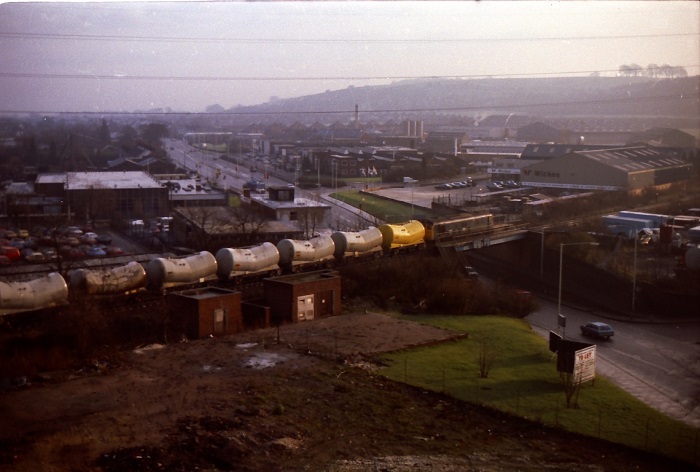 The 15.02 Manchester – Bristol parcels continued with Class 25 haulage, on November 15th 25154 failed on this working at Hereford, remarkably 25244 was available to take the train forward.

25244 was noted at Manchester Victoria on December 28th with a parcels (?) working. A repair had been made to the No.2 end 2nd man's side of the cab, the shade of the yellow paint was a liitle light.

25244 passed northbound through Preston station on June 29th with a single Mk1 CK coach (major corrosion visible base of No.1 cab, 2nd man's side).

On July 5th 25211 & 25244 were noted near Shrewsbury with the evening Severn Tunnel Junction - Mossend (?) Speedlink. On July 27th 25244 was noted southbound at Warrington Bank Quay with an engineers train. 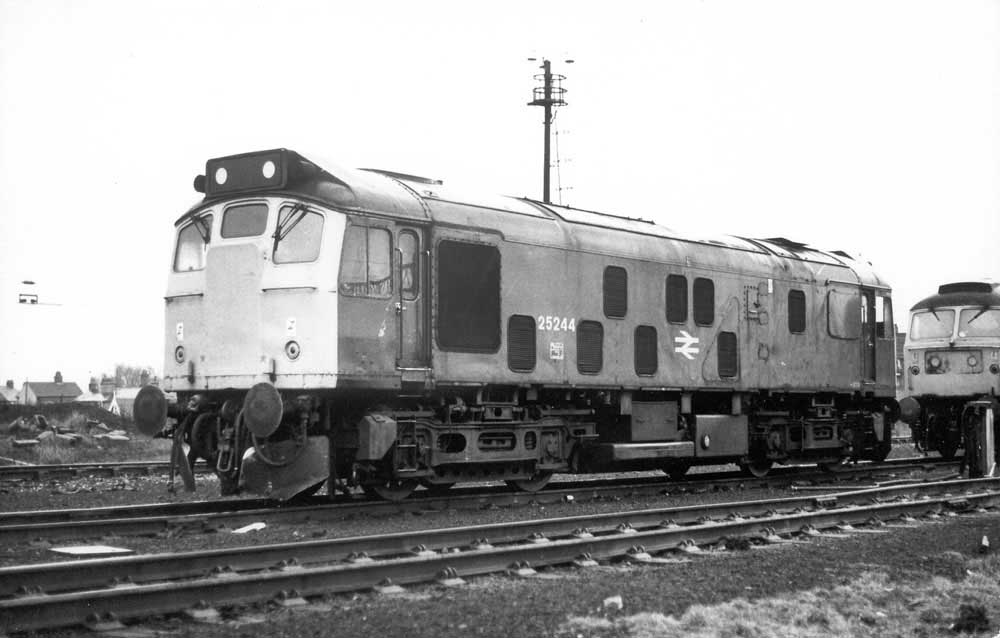 Photograph collection of webmaster.
A work weary 25244 somewhere, sometime. 25244 was withdrawn due to fire damage at Crewe. It made the expected trip to Vic Berry's, Leicester but fortunately left there after being acquired for preservation.

25244 was noted passing Berkswell on May 31st with a northbound Speedlink.

25244 worked the Burn Naze - Birkenhead Duke Street special of empty oil tanks on August 12th. Also on this day 25244 worked a short train of cement tanks from Walton Old Junction to Kirkham Yard. On August 17th 25244 & 25037 was stabled at Shrewsbury. 25244 was noted at Crewe depot on August 20th and at Warrington Arpley on August 22nd.

On September 24th 25244 worked the 17.16 Stranraer – Scunthorpe freight to Tyne Yard, returning with the next morning's 02.13 Tyne – Carlisle cement. On September 29th 25244 was noted at Newton on Ayr (Falkland Junction) on a ballast working. 25244 remained north of the border for its last recorded passenger working, on September 30th the 21.10 Euston - Stranraer Harbour had 25244 added as pilot from Ayr, a Class 47 was the train locomotive.

25244 was noted light engine at Carlisle station on December 7th.

The extremely cold weather caused major problems for the sand trains operating at Caldon & Oakmoor, with the loads being frozen into the wagons! These workings, once a mainstay for the Class 25s were now usually in the hands of Classes 20 or 47, although on March 6th 25244 visited Caldon. After taking up a string of empties it returned with twenty four loaded hoppers (made in two trips). 25244 was noted light engine at Watford Junction on March 8th. 25244 was noted at Willesden on March 13th. 25244 was stabled at Bescot on March 29th & 31st.

On April 7th 25244 was noted southbound through Bescot with a short freight. 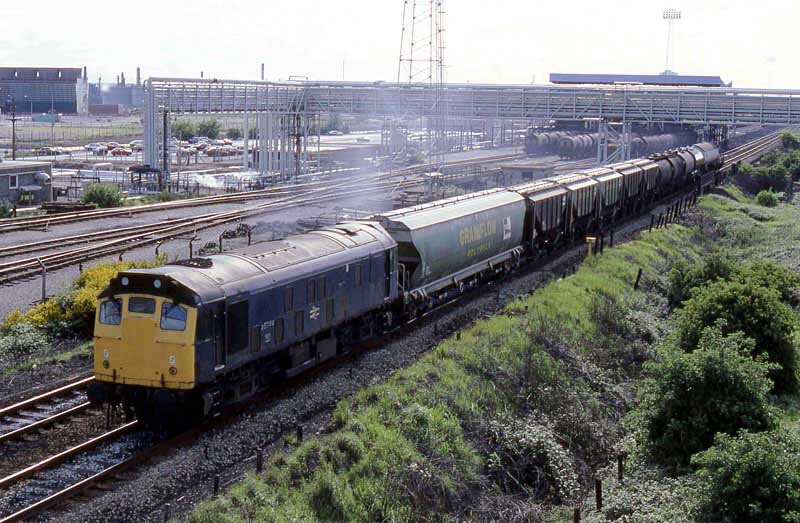 Photograph courtesy Ron Kosys.
25244 passes Stanlow on June 6th 1986 with the 6E93 16.20SX Birkenhead to Whitemoor Speedlink. In the background are some of the facilities used for the loading of the oil trains.

On July 2nd 25244 was noted stopped in the down sidings at St Helens Shaw Street station with inspector's saloon DB999503, the staff taking their lunch break.

1987
During September a number of departures from Vic Berry's yard reflected a brighter future for the chosen machines. First to leave was 25244 on September 23rd, destined for the Swanage Railway. Its journey was notable, being hauled by 97201 (with 97403 & D4) en route to the Basingstoke Railshow (26th & 27th). However at Banbury 25244’s battery box cover hit the platform edge, the Class 25 was removed from the consist, going forward after inspection later that afternoon. It was repainted prior to its presentation at Basingstoke.