On May 26th 25317 was noted at Winwick Junction with a three car Merseyrail electric multiple unit.

On June 6th a Leicester - Pwllheli day excursion was worked from/to Nottingham by 25317 & ?, a total of 431 passenger miles!

25284 & 25317 and two brakevans were noted passing Upton on the afternoon of September 21st headed for Birkenhead.

The afternoon Whitemoor - King's Lynn freight was worked by 25317 on November 9th.

Gosford Green freightliner terminal commenced a new daily service to Scotland from December 7th, 25317 took out the first service, specially seen off by the Lord Mayor of Coventry.

On August 19th 25317 worked the 07.30 Nottingham - Llandudno Town as far as Chester where it was declared a failure and replaced by 25094. On August 24th 25317 was eastbound through Manchester Victoria with eight parcels vehicles presumably enroute to Red Bank, it later worked the 15.32 Manchester Victoria - Bangor and the 19.30 Bangor - Manchester Victoria, followed on August 25th with the same two workings. Three days later (28th) a Longton - Scarborough excursion was worked roundtrip by 25317 & 25060.

Whilst working the Mostyn Dock - Amlwch non-ferrous ore train on November 21st, ten hoppers became derailed due to a washout. 25317 remained on the track, the line was cleared by November 23rd when 25317 worked out with an Amlwch - Ellesmere Port freight.

On the afternoon of December 19th 25317 was southbound at York with three railcars.

On the afternoon of July 19th 25317 was stabled at Springs Branch.

On the evening of September 9th 25317 was noted at Lancaster with a permanent way train.

During October 25317 was at Derby Works undergoing repair.

On July 12th 25317 was in use at Rugby station assisting electrically hauled services in the vicinity of the station due to the power being off.

25317 was noted at Manchester Victoria on October 4th as banker?

25317 was noted passing through Bolton with a freight on October 14th.

25317 was noted light engine at Preston in heavy snow on December 14th. 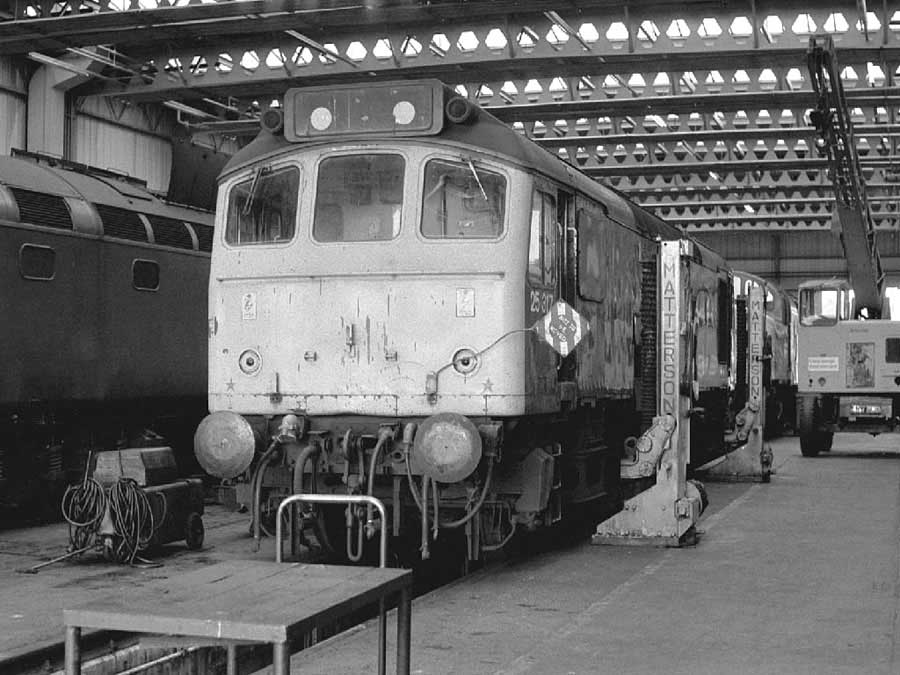 Photograph courtesy Tony Sayer.
Surrounded by the 'tools of the trade' 25317 rests at Springs Branch on July 26th 1981. 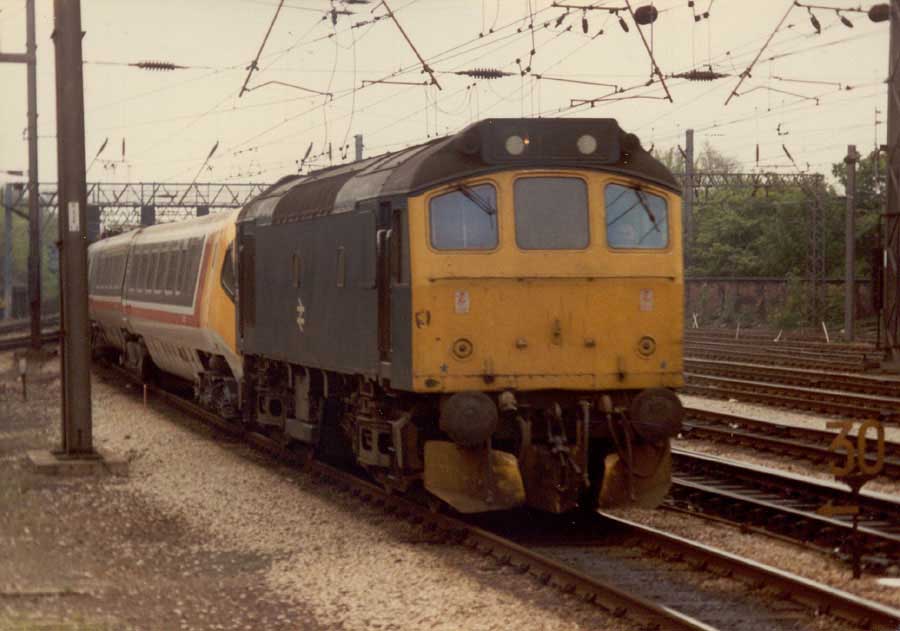 Photograph courtesy Jerry Glover.
25317 as it heads north through Preston station on May 12th 1982 with one of the APT sets.

Towards the end of May (actual date uncertain) 25317 worked a Glasgow Central - Stranraer Harbour service.

25317 was stabled at Birkenhead Mollington Street on August 1st. On August 29th the 23.05 Manchester Piccadilly - Brighton was assisted by 25317 & 25322 between Bletchley & Watford Junction due to the power being off for engineering work.

On September 14th 25317 was light engine at Warrington Arpley.

The serious derailment of 81016 and some of its sleeper train at Old Linslade on December 9th required much activity to rerail the train and repair the line. On December 11th 25317 & 25253 were noted at Tunnel Hill with a loaded ballast train.

Distinguishing Features
No.2 cab: 2nd man's side corner, dent with missing paint about halfway up the cab front: October 1981 until withdrawn.
No.2 cab: center of cab front: several vertical stains: December 1980 - July 1981 (may have been cleaned off or painted over at some point).
No.1 cab: driver's side corner, damage and rust where handrail joins the cabfront: ?? until withdrawn.