1980
After the hectic summer of 1979 for passenger workings for 25032, 1980 has so far only revealed one. On April 19th the 'Great Western' LCGB railtour from Wigan to Didcot/Swindon utilised 25032 & 25088 between Birmingham New Street - Leamington - Didcot - Swindon - Cheltenham - Worcester - Droitwich Spa - Stourbridge Junction - Birmingham New Street. The Class 25s were in fine fettle and were able to put up a commendable performace including some 90mph running. 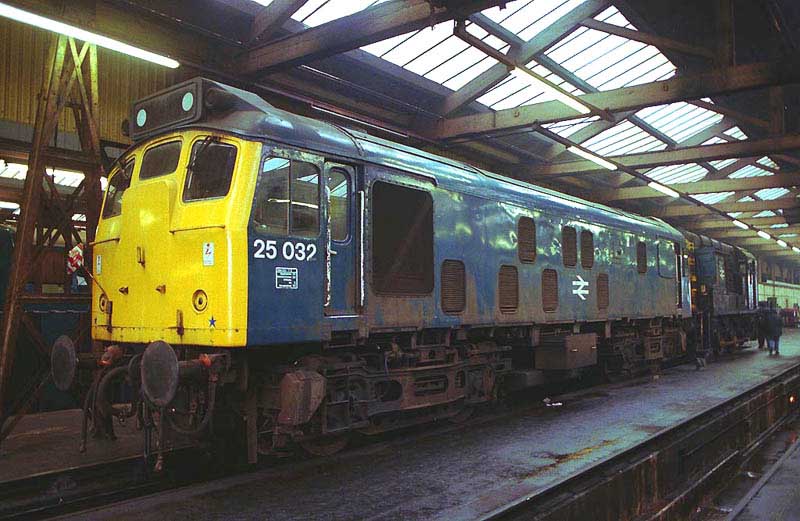 Photograph courtesy Martin Bray
Its May 27th 1980 and 25032 is at Newton Heath receiving attention to its batteries. 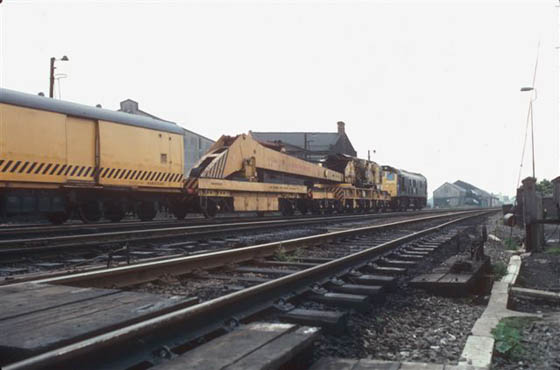 Photograph courtesy Chris Taylor
The Toton breakdown crane dwarfs 25032, pictured at Coalville during July 1980. The train had been brought in to assist with some merry-go-round wagons that had somehow been shoved through a set of buffers.

On October 21st 25032 was eastbound at Guide Bridge with a mixed freight.

A diesel multiple unit failure on May 2nd saw 25032 assist the 11.30 Chester - Wolverhampton to Shrewsbury. Later that afternoon 25032 was noted on a Wolverhampton - Shrewsbury (Chester?) service.

On a very snowy December 8th 25032 was noted returning light engine from Dunstable to Luton. 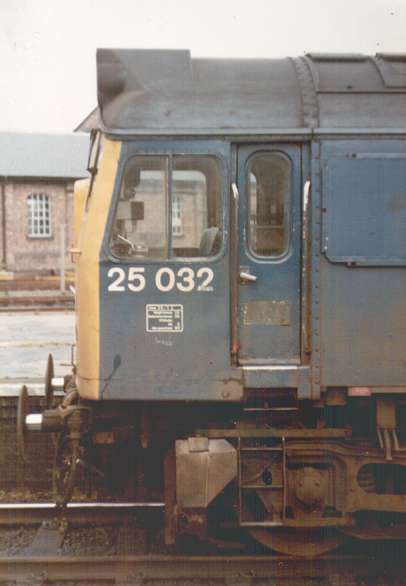 25032 was noted shunting at Llandudno Junction on April 2nd.

On the afternoon of May 28th 25032 was eastbound at Pilning with a mixed freight.

On May 31st the Pope visited Manchester, a half hourly service provided from Blackpool, with Class 40s predominating, although 25032 worked an evening Manchester Victoria - Blackpool North round trip.

On July 24th 25032 was northbound at Preston with short wheelbase chemical tanks.

On August 2nd 25032 was noted at Settle Junction with a Bescot - Carlisle freight.

25032 was noted at Banbury on June 1st with a freight train.

On June 9th 25032 was southbound at Loughborough with a loaded ballast train.

During July 25032 was transferred to Crewe, its last move. On July 3rd 25032 & 25120 worked the 23.00 Milton Keynes - Crewe, a relief train for travellers returning from a David Bowie concert, the booked electric locomotive had rescued another service. On July 29th 25032 was noted westbound through Chinley with loaded ICI hoppers.

On a snowy December 12th 25032 worked assorted wagons or Wednesbury sidings to be loaded with scrap metal.

On the evening of December 20th 25032 was at Hemel Hempstead with an electrification train. 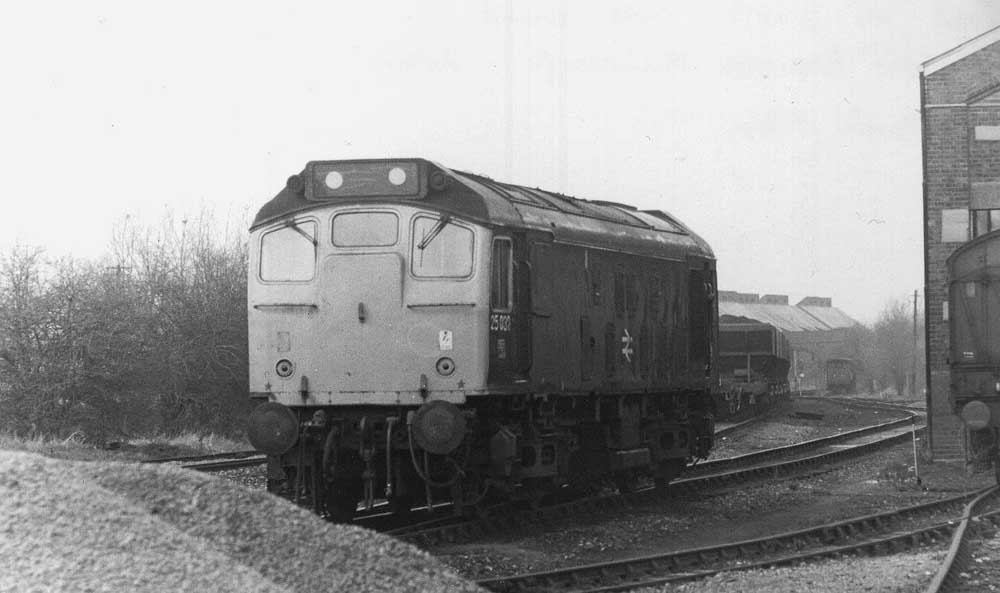 Photograph courtesy Mark Cook
25032 shunting at Aylesbury on March 29th 1984. This view clearly shows the No.2 end has lost its corner valencing and the center fittings apart from the lamp bracket have been removed.

On August 16th 25032 was noted light engine at Hellifield and also noted at Ribblehead with loaded ballast wagons. On August 22nd 25032 worked the 6P83 Warrington Arpley to Chorley ROF trip. An ailing 47616 was replaced at Chester whilst working the seven coach 07.55 York - Llandudno Town on August 30th, with 25032 taking over and remarkably continung with the return working, the 13.24 to Scarborough, though 25032 was replaced at York! The next day (31st) 31107 was noted westbound at Huddersfield hauling 47131 & 25032, presumably the York - Crewe working used to take surplus power from the Eastern Region to the London Midland Region.

25032 was shunting freightliner wagons at Lawley Street on October 12th.

Another short trip for 25032 occurred on December 27th assisting an ailing diesel multiple unit between Stoke on Trent & Crewe (the 17.42 Lincoln - Crewe). Since the summer of 1984 the diesel multiple unit operated service between Lincoln and Crewe had seen an increasing use of locomotives and stock to supplant the ailing multiple units.

On February 2nd 25085 was stabled at Warrington Arpley.

During February 25032 seemed to be in the right place at the right time when it came to rescuing ailing passenger services. It started on February 5th when 25032 & 25035 assisted the 17.42 Lincoln - Crewe diesel multiple unit forward from Nottingham. Seven days (12th) later when a Class 47 failed on the 07.40 Milford Haven - Bristol at Cardiff, 25032 was available to complete the journey. On February 16th the 08.40 Leicester – Birmingham operated as a diesel multiple unit hauled by 25032, the booked Class 31 and coaching stock were replaced due to having no heating. 25032 and the diesel multiple unit then worked the 10.20 Birmingham New Street - Norwich as far as Leicester, where they were replaced by a Class 31/4 and hauled stock.

On April 7th 25032 was noted propelling an engineers train through Madeley. On April 21st 25032 was at Bristol Bath Road. On April 23rd a pair of Class 25s were noted at Chesterfield hauling the morning Arpley - Parkeston Speedlink behind 25175 & 25032. From the photograph below it appears that this combination of 25032 & 25175 remained together at least through May 3rd 1985, although on April 28th 25032 was noted at Crewe station with a large crane. 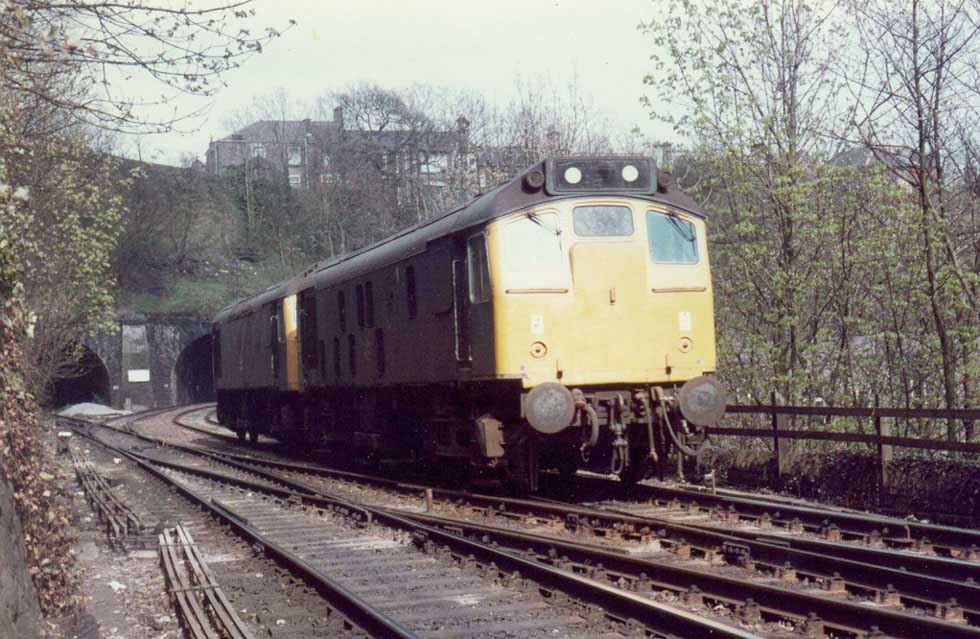 25032 was noted at Warrington Bank Quay on May 22nd with a southbound speedlink freight and later noted at Ashburys with this service. On May 26th 25032 assisted a failing diesel multiple unit between Parkside Jct and Warrington (a Disley - Llandudno Town service?).

25032 was stabled at Buxton on June 9th. On the morning of June 25th Healey Mills commandeered 25032 to take a brake van to Knottingley, returning with two wagons and a brake van, a working normally handled by Classes 31/37.

Mainline running took place for 25032 on July 6th, working the 04.27 St Pancras - Leicester relief. Two days (8th) later it worked the round trip Burton - Skegness, normally worked by pairs of Class 20s, followed on July 9th with the 06.33 Leicester - Birmingham New Street and the 08.10 Birmingham New Street - Norwich as far as March where it was replaced by a 31/4. From March 25032 was joined by 25095 to takeover the 6M86 Parkeston - Arpley. On a very wet July 15th 25032 passed through Leicester northbound with a single parcels coach.

On August 1st 25032 was southbound at Shrewsbury with a parcels train.

25032 worked the trip job that included a visit to Haymarket coal yard on September 3rd.

25032 was noted northbound at Hereford on September 25th with a seven van 6S75 Severn Tunnel Junction - Mossend speedlink. On September 29th 25032 was involved with engineering relaying work at Fazakerley, leading to the abolition of Fazakerley signalbox.

25032's last passenger haulage for 1985 was in assisting a diverted electric service (13.05 Glasgow - Euston) between Warrington & Crewe, via Chester due to engineering works on October 10th.

1986
On January 26th 25032 was at Roodee Junction, Chester with a track crane renewing the down fast line. whilst handling this engineering work 25032 woould also drag 97406 and the track crane back to Chester depot for refuelling.

25032, at the time the elder statesman of the Class, was handling trip workings in the Speke area on March 6th. The next day it was noted parked at Holbeck, it would be taken out of service here on March 10th 1986. 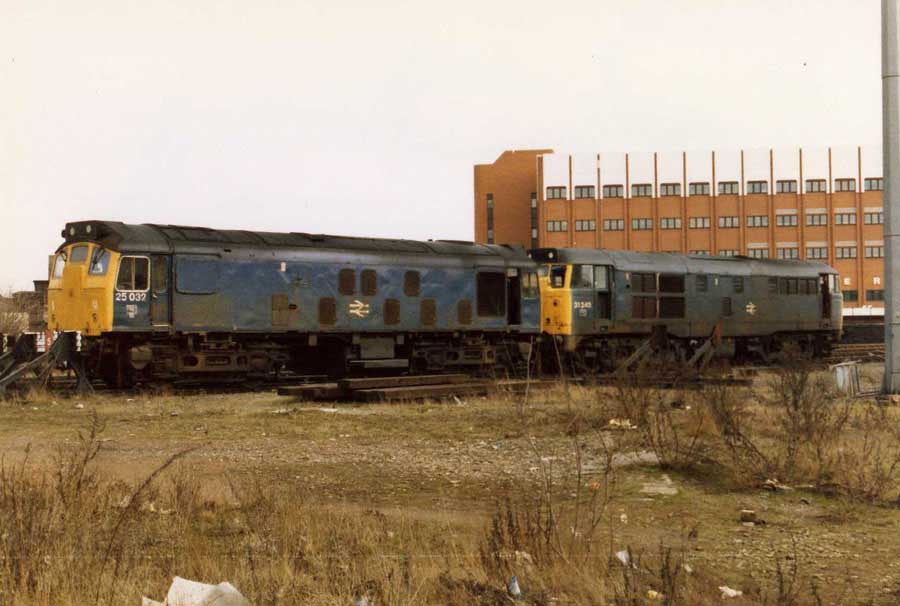 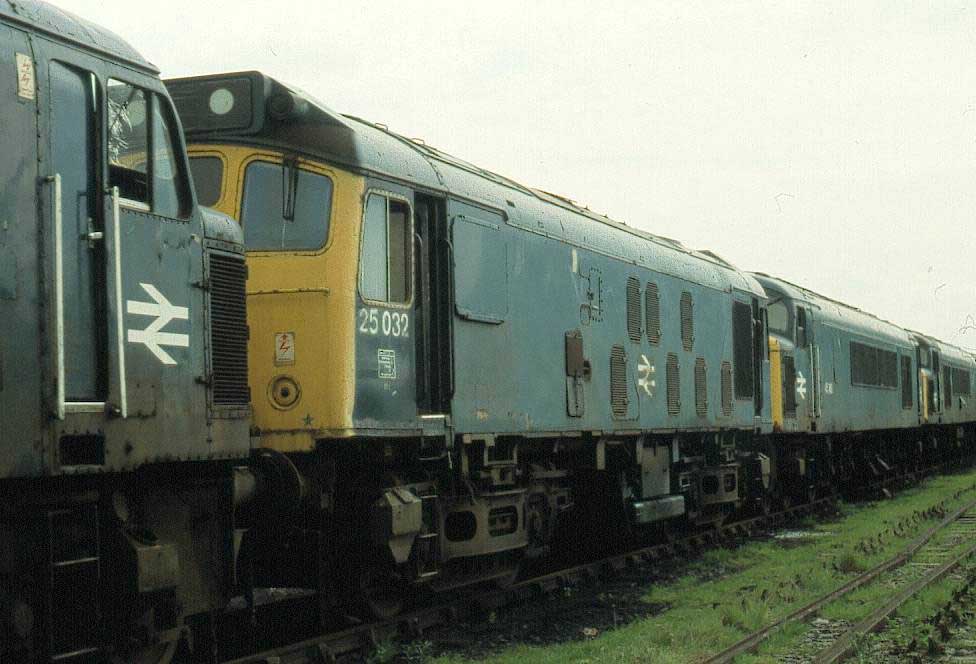 Photograph courtesy RS
25032 stands dumped at Toton on May 18th 1988. It has about two months left at this location prior to moving to Leicester for scrapping.