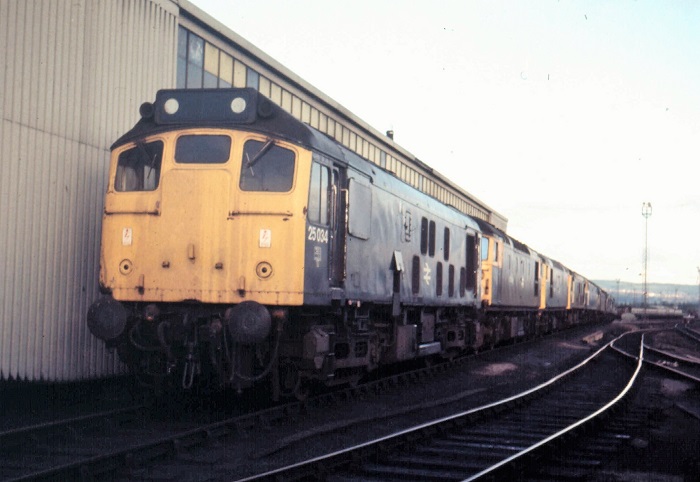 The light is fading fast on the evening of June 26th 1977 as 25034 is seen heading a long line of locomotives at Millerhill depot. 25034 appears ready for a visit to the workshops, though it will not be until the spring of 1978 when this occurs.

25034 underwent a heavy repair at Glasgow between late March & June, including the fitting of dual braking equipment.

Travelers on February 16th’s 22.15 Euston – Glasgow were already running over two hours late when 47185 failed at Dumfries. 25034 was on hand and 25078 was added at Kilmarnock but as neither could provide heat the four and a half hour late arrival at Glasgow must have been some sort of blessing.

Fuel restrictions were imposed from May 11th due to the world crisis affecting oil supplies, these restrictions would affect most of British Rail leading to the running of shorter trains and the curtailment of certain non-essential services. One excursion that did run was the 'Buchan Line' SRPS railtour on May 12th from Falkirk to Aberdeen for a slow run down the Fraserburgh branch. 40061 was used for the mainline running whilst 25034/35 were used on the branch. The Kincardine Junction – Oakley and Dyce Junction – Fraserburgh were to close that week making this the last train over those sections. 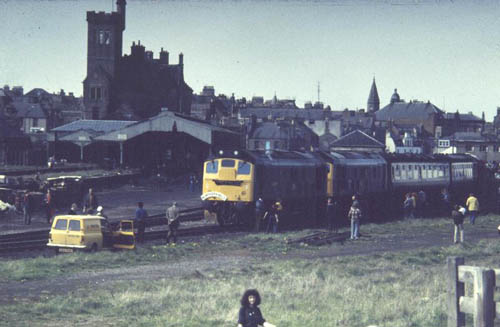 Photograph courtesy Stew Robertson
As mentioned above 25035 (leading) & 25034 visited Fraserburgh on May 11th 1979 with a railtour and are seen here awaiting departure from Fraserburgh.

On September 2nd 25034 was stabled at Haymarket.

25034 was at Glasgow for generator (N4) repairs from December to January. 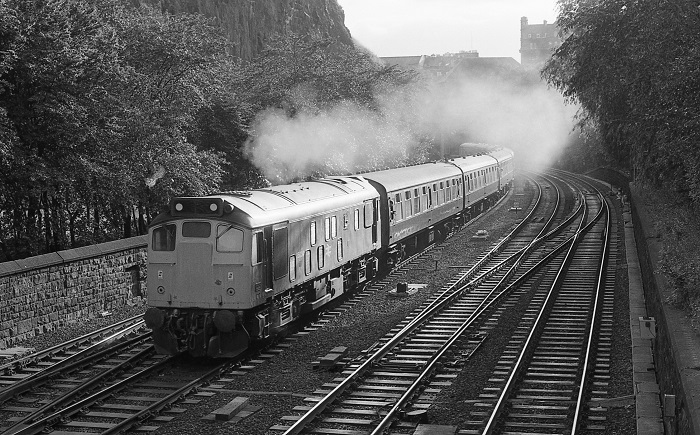 On August 21st 25034 was noted southbound at Muir of Ord with a lengthy freight (pipe and grain wagons).

On a snowy April 25th 25034 was light engine at Settle Junction en-route from Carnforth to ??

On September 13th 25034 was at Stratford on Avon with ballast wagons.

On June 4th 25034 was northbound at Warrington Bank Quay with a short freight.

After a Wigan – Liverpool diesel multiple unit became a non-starter on June 10th, 25034 was commandeered from a local trip working to pilot the service. Two days later on June 12th 25034 was noted at Preston with a northbound parcels train. 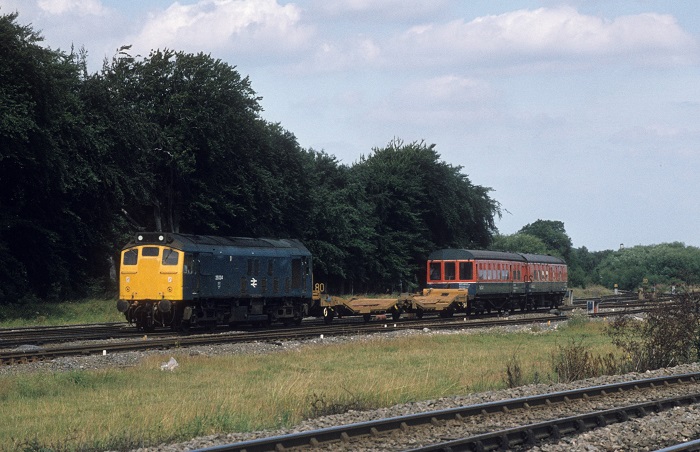 25034 was noted at Severn Tunnel Junction on October 9th.

On February 20th 25034 was stabled at Northampton. 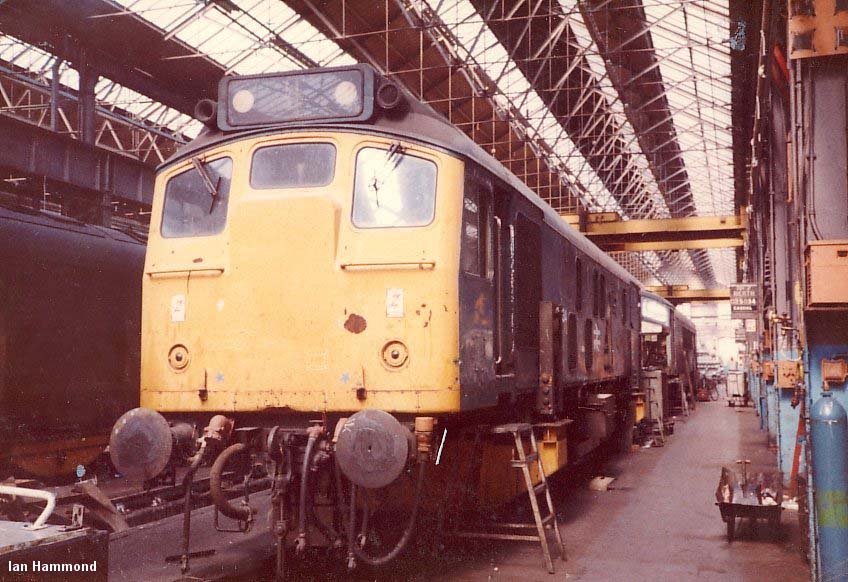 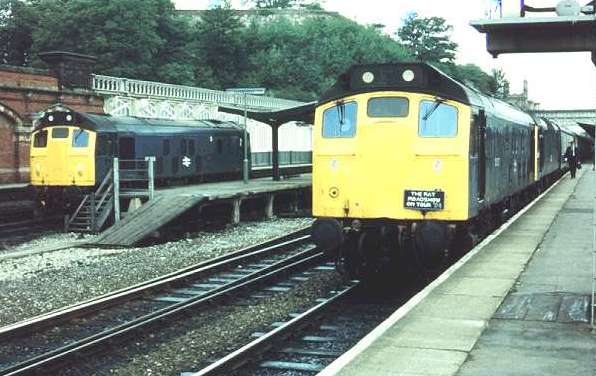 On September 11th a defective coupling caused a Wolverton – Hornsey empty stock working to split in two at Cheddington. Tring loop was used to stable the front portion of the train whilst 25034 was sent out to retrieve the rear part. The following weekend (15th) 25034 & 25058 worked the 07.55 Euston - Aberystwyth forward from Wolverhampton, returning with the 14.00 Aberystwyth - Shrewsbury. This was the last scheduled passenger working for the Class 25s over the Cambrian route, next year the Class 37s would be in charge and although the Class 25s would show up from time to time they were not diagrammed for the passenger workings. 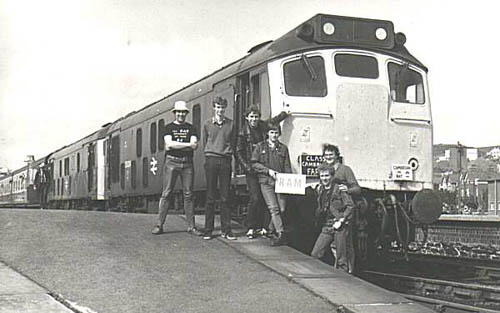 On the last day of September the 11.40 Manchester – Gatwick behind 47331 became completely derailed approaching Dorridge station, car transporter wagons on an adjacent track prevented the derailing vehicles from tipping completely over. The Bescot crane arrived behind 25298, the re-railing train behind 25034 and a little later the Toton crane appeared behind 45017.

Travellers on October 12th's 19.30 Bangor - Manchester were hauled by 25034 throughout. The 6V93 Mossend - Severn Tunnel Junction Speedlink failed at Hereford behind 25034 on October 27th, 37243 was eventually procured to rescue the service.

On November 4th 25034 was noted with a rake of bogie ballast hoppers at Hereford. A long distance enthusiast's excursion on November 16th started out with 25034 & 25057 on the St Pancras - Derby leg of the 'Grampian Highland' two day railtour to Inverness. This tour used a total of seventeen locomotives, perhaps the most interesting of which was 46026 from Derby to Newcastle, this working proved to be its last.

1985
'The Cornishman' railtour, an overnight trip from St Pancras to Plymouth on January 25th/26th had 25034 & 25192 diagrammed to Leicester, but 25192 failed at Luton, 31154 assisted from Bedford. The following day the return leg from Leicester to St Pancras was worked by 25034 & 25237. Participants on the tour remember a time of very cold weather, with many of the locomotive combinations provided unable to provide any form of heating.

On February 23rd 25034 & 25044 handled an enthusiast special between St Pancras and Stafford (see view below), with the train routed over the north to west curve at Lichfield between High & Low levels. 45048 took over for the run to Attenborough, buses taking the participants for a tour of Toton. The Class 25s returned the tour to St Pancras, for a total of 408 passenger miles. 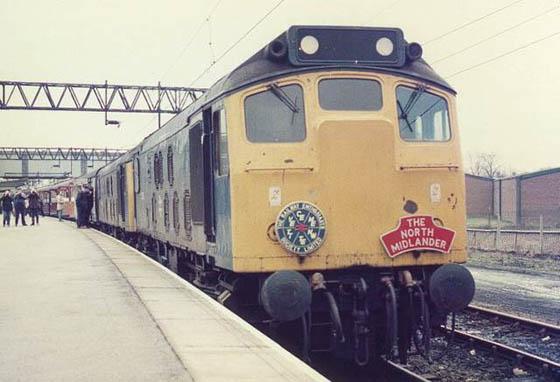 Photograph courtesy Nick Ross
25034 & 25044 wait at Stafford on February 23rd 1985 after working the first leg of a railtour from St Pancras bound for the Nottingham area.

The Liverpool portion of the 18.15 Glasgow – Machester was hauled from Preston by 25034 on May 17th. A week later (26th) this machine was noted at Oxford on the afternoon Longbridge – Cowley freight. 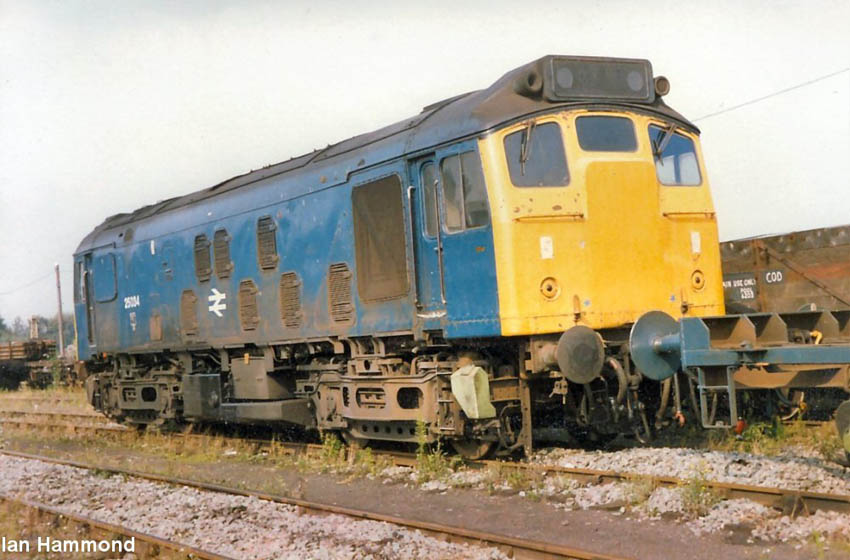 25034 was stabled at March on September 10th. Despite the shrinking empire of the Class 25s many still had their adventures such as 25034 & 25175 on September 21st working the chartered 'Landore Lodger' Bolton - Swindon Works - Swansea special, performing faultlessly on all legs of the 517 mile trip. The railtour had originally been organised without a request for specific motive power, it was only in the final few days prior to the tour that the possibility that Class 25s might be used. The route was Bolton - Manchester - Crewe - Birmingham - Didcot curve - Swindon (into/out of the Works) - Swansea - Central Wales line - Crewe - Bolton. This railtour coincided with an Open Day at Landore depot, where by chance 25213 was one of the locomotives on display.

On September 22nd 25034 & 25175 were noted returning to Springs Branch after completing ballast duties.

On September 28th a Nelson - Carlisle steam special was assisted between Upperby Junction & Carlisle by 25034 & 25181.

On October 16th 25034 was noted passing Ulverston with a mixed freight.

25034 was noted at Llandudno Junction on November 22nd with a short freight from Maentwrog Road.

Graeme Brown recalls a memorable trip on February 14th which resulted in haulage from 25034. Graeme was travelling from Dundee to Cheltenham, hoping to use the Aberdeen - Penzance service. Unfortunately its locomotive, 47637 had failed just south of Aberdeen, possibly a victim of the extreme cold at this time. So the Dundee - Edinburgh trip was made behind 27049 as far as Haymarket where the late running Penzance express was picked up, now with 47417 in charge and running about an hour late. 47524 made the short hop to Carstairs where 85004 was waiting to take over. The Glasgow portion of this train had long since left. The journey south was quiet until news reached the train that a broken rail in the Warrington area was going to create a detour from Preston.

At Preston the electric remained on the train but now with 25034 in command. There was no heat from the Class 25 so the coaches soon took on quite a chill. We were diverted via Manchester Victoria, this was before the Windsor Link had opened so it was up Miles Platting, only just making the climb, then it was a right at OAGB junction, over to Denton Junction and back on to the mainline at Heaton Norris. At Stockport the electric came back to life but 25034 remained on the train, it was a sprightly run to Crewe, at least there was heat now. 25034 came off at Crewe, 85004 roared on to Birmingham New Street where 47540 took over for the remainder of the journey to the West Country.

When 25032 was withdrawn on March 10th the honour of being the elder statesman of the class was passed to 25034.

On Saturday August 16th 25034 was one of seven locomotives stabled at Rugby over the weekend.

25034 arrived at Hereford on September 17th hauling a long rake of empties, and noted there the next day (18th) southbound with 21T MDV mineral wagons.

On November 16th 25034 was at Ynyslas with two ballast wagons, which were loaded here and shuttled to Borth for unloading.

25034 was withdrawn on December 22nd and later stored at Basford Hall. 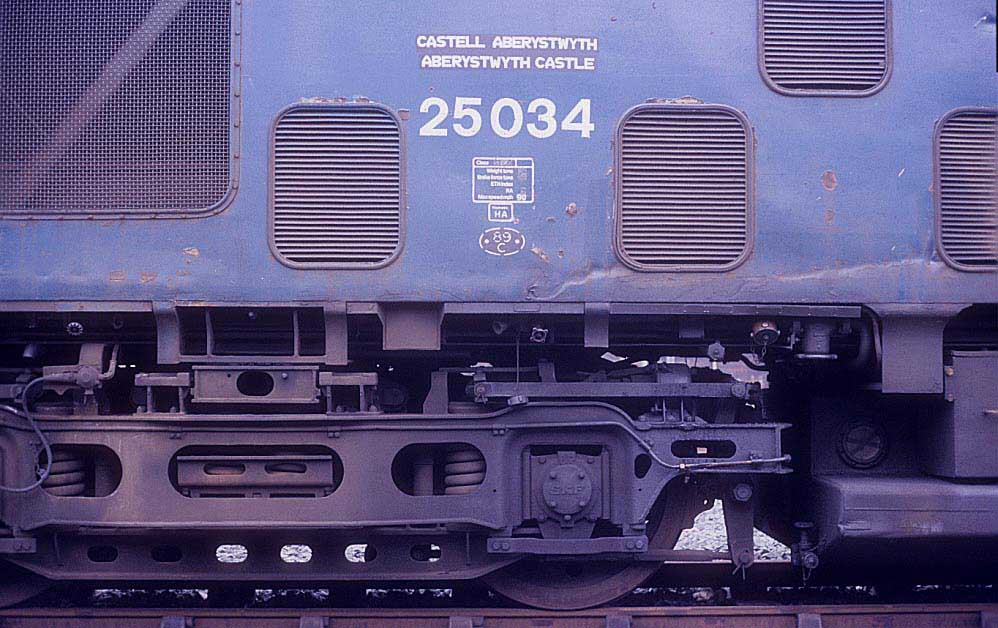 Photograph courtesy Paul Corrie.
If you like detail, here's an interesting view of parts of the bogie and bodyside of 25034. The painted 89C shedplate is for Machynlleth which included Aberystwyth as a sub-shed. The number was also stencilled on both cabfronts.

Distinguishing Features
No.2 cab driver's side: considerable scrape marks on lower half of cabside panel: at least March 1982 until withdrawn.
No.1 cabfront driver's side: large dent with missing paint to left of right electrification flash: August 1980 - September 1985 (patched up by July 1986).
No.1 cabfront 2nd man's side: various rusty patches between handrail and 2nd man's windscreen: first rust patch noted July 1981 - September 1986.
No.1 cabfront: 25034 in black lettering centered on the cabfront about the height of the marker lights: ?? until withdrawn.
Named Castell Aberystwyth / Aberystwyth Castle; located above number: ?? until withdrawn.