On February 14th 25052 was noted at Exeter stabling point.

During May 25052 was transferred to Laira, resulting in the locomotive featuring on the summer passenger locals in the Exeter & Plymouth area.

On July 22nd 25052 was noted at Lostwithiel with loaded clay hoods.

On July 28th was noted at 6.45am at Lostwithiel with an unidentified Up freight.

On November 16th 25052 worked the 6B70 15.05 Whimple - Exeter Riverside. At about 5pm 25052 took the 5Z08 up to Exeter Central or Exmouth Junction, with 47246 providing banking assistance. 25052 later returned to the stabling point and would work the 2B44 19.35 Exeter St Davids - Newton Abbot (eight coaches). At about this time there was drama on a nearby platform as 47077 waited to work the air-conditioned eight coach 2B42 18.45 Exter St Davids - Paignton. The Taunton guard refused to work the train due to there being no heat. A spare guard substituted in order to allow the service to go ahead.

On December 29th 25052 was noted at Exeter stabling point parked on the cripple road. This was a day of extreme cold, wintry weather which had hit the railways badly. Other locomotives at Exeter were in poor shape, 25032 would not reverse, 31260 had two traction motors isolated, 47063 was restricted to local work, 47103 was suffering a complete power loss. 31124 & 31229 had come off a Salisbury - Meldon empties with one of the Class 31s having developed a fault. The two Class 31s later towed 47103 & 25032 to Bristol Bath Road. The good news was that 50044 was available for work!

At about 10pm on April 12th 25052 was noted on platform six at Exeter St Davids providing steam heat to a sleeper coach.

1977 produced a further selection of local Exeter area passenger workings. Other highlights included on June 4th a Bideford - Paddington day excursion to celebrate the Queen's Silver Jubilee was worked from Bideford to Exeter St. Davids by 25052 & 25223.

25052 was noted working an up empty coaching stock near Bishopsteignton on August 28th. The next day (29th) a charter train was noted between Meeth & Barnstaple with 25052 & 25223 top and tailing.

On September 11th 25052 was westbound at Dawlish with a passenger service. 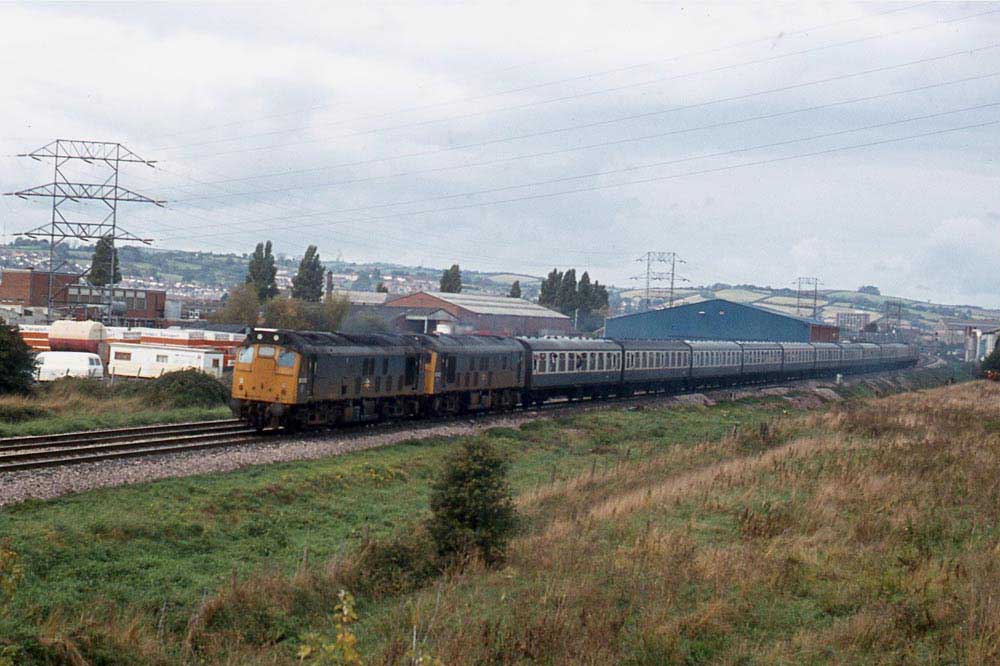 Photograph courtesy Peter Lovell.
25052 & 25223 pass Marsh Barton on an overcast October 9th 1977 having just taken over from 40081 & 40084 at Exeter. The Class 25s will work the special down to Paignton. The Class 40s were manned by a Kings Cross crew, but on the return from Exeter St Davids the Exeter conductor was at the controls of the Class 40.

On a wet April 1st 25052 & 25224 were noted at Exeter St Davids with a mixed train (one GUV, two Mark I coaches, three CCTs and two PMVs), possibly the early morning Barnstaple - Exeter mixed service. On the late evening of April 11th 25052 was stabled at Exeter. The next day (12th) 25080 & 25052 were noted as double headed light diesels in the Up direction passing Plymouth at 1.30pm (to Laira to refuel?). Later that afternoon the same pair of light diesels were noted in the Down direction passing Plymouth to work a St Blazey - Carlisle freight? On April 21st 25052 & 25170 worked a St Blazey - Carlisle freight to Exeter Riverside. 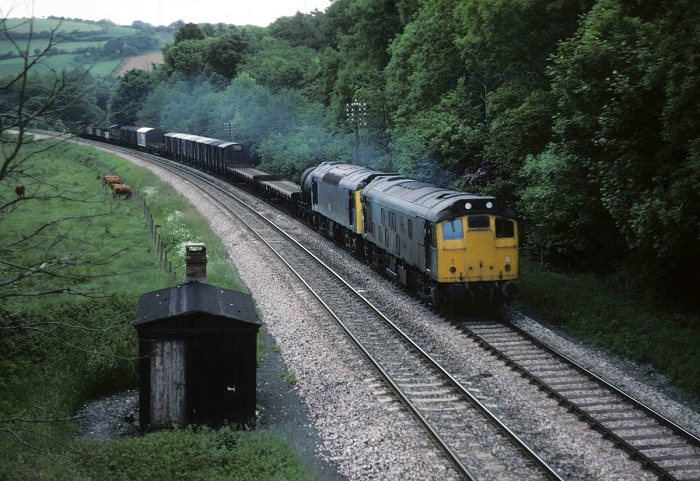 On the morning of August 1st 25052 was at Exeter stabling point, later that day it would work the 13.40 Riverside - Chard milk empties and the return 7B70 17.05 Chard Junction - Exeter Riverside (nine CovAB and brake van).

On the evening of November 2nd 25052 was stabled at Exeter.

1979
Heavy snow over the New Year plagued services with delays and faulty equipment making life even more difficult to maintain the timetable. In the West Country Exeter proved to be a graveyard for frozen up locomotives, with temperatures reaching down to –13C most things simply froze up. At Exeter the local services were cancelled with the diesel multiple units frozen solid. The diesels fared little better with eighteen frozen up locomotives including 25052, 25206/225/263.

On a wet June 13th 25052 was noted arriving at St Erth from Hayle Wharf with two wagons for the up side goods yard to be loaded with scrap metal. A week later on June 20th was noted at Exeter St Davids with a short freight from the direction of Exeter Central.

On August 2nd 25052 worked the 19.35 Exeter - Paignton. On the morning of August 4th 25052 was at Exeter stabling point. On August 17th was noted at Exeter Central having collected empty Presflos from the nearby Blue Circle Cement terminal in Exeter Central goods yard. The cement empties would be headed to Riverside Yard for a service back to Westbury cement works. On August 18th 25052 worked the 13.50 Exeter St Davids - Barnstaple. 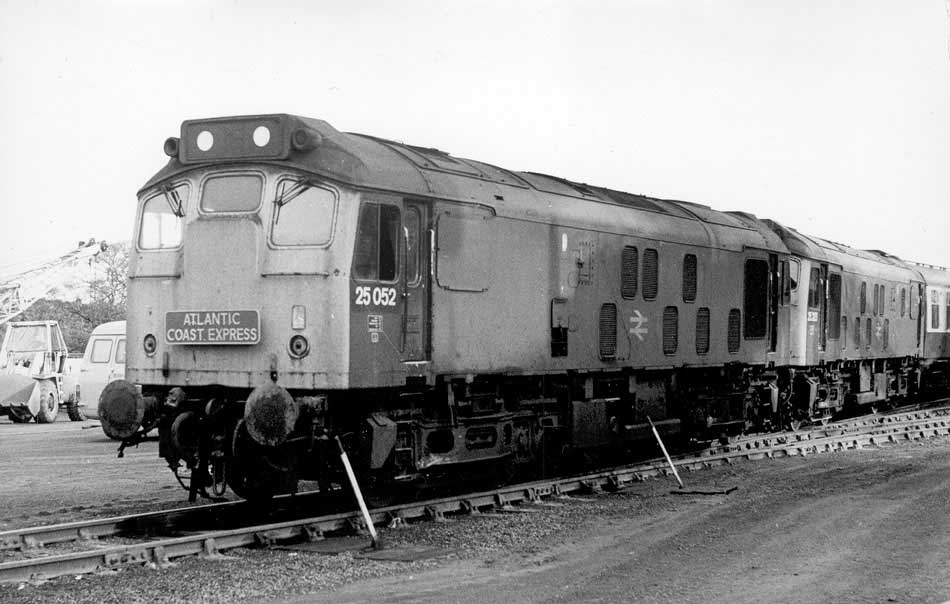 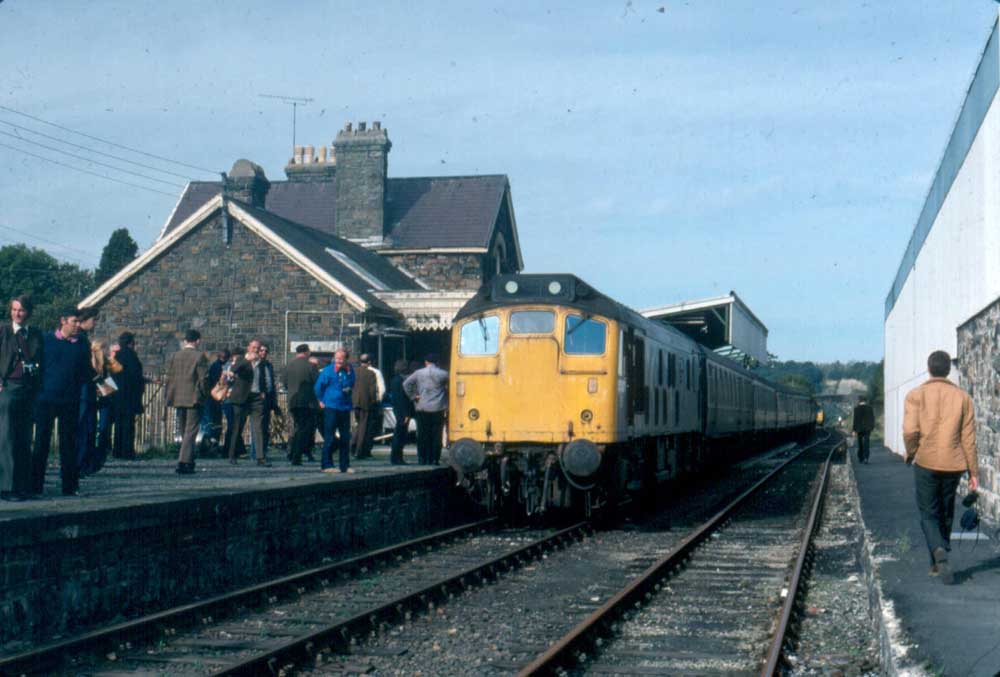 On December 27th heavy rains in the West Country caused interruption to services on the 27th/28th in the Exeter area. The Barnstaple & Salisbury lines were closed to flooding early on the 28th, but light engines sent out confirmed the lines were passable. The 10.10 Exeter - Waterloo was the first sent out over that route with 31258 and five air-conditioned coaches, the stock had not been cleaned, with no food service or heat. The 12.28 Exeter - Waterloo departed with 31183 and eight heated vacuum braked coaches, 25052 banked the train up to Exeter Central.

It must be assumed that 25052 did work some passenger services during 1980, if so these workings went unrecorded.

The end of the summer timetable saw 25052 withdrawn during the first week of October, it was quickly moved to Swindon Works and scrapped there by early November 1980, one of the quickest disposals recorded for any Class 25. Withdrawn at the same time as 25052 were Laira shedmates 25223 & 25225.