On the afternoon of December 27th 25218 & 25066 were noted at Blackburn with a Nottingham - Blackpool special.

25066 was pressed into service on April 29th's 17.05 Shrewsbury - Wolverhampton service due to a shortage of diesel multiple units.

During October 25066 was transferred to Springs Branch.

During May 25066 was transferred to Haymarket, spending the next three and a half years allocated to Scottish depots. 25066 worked an unidentified passenger service between Perth and Glasgow Queen Street on May 14th. 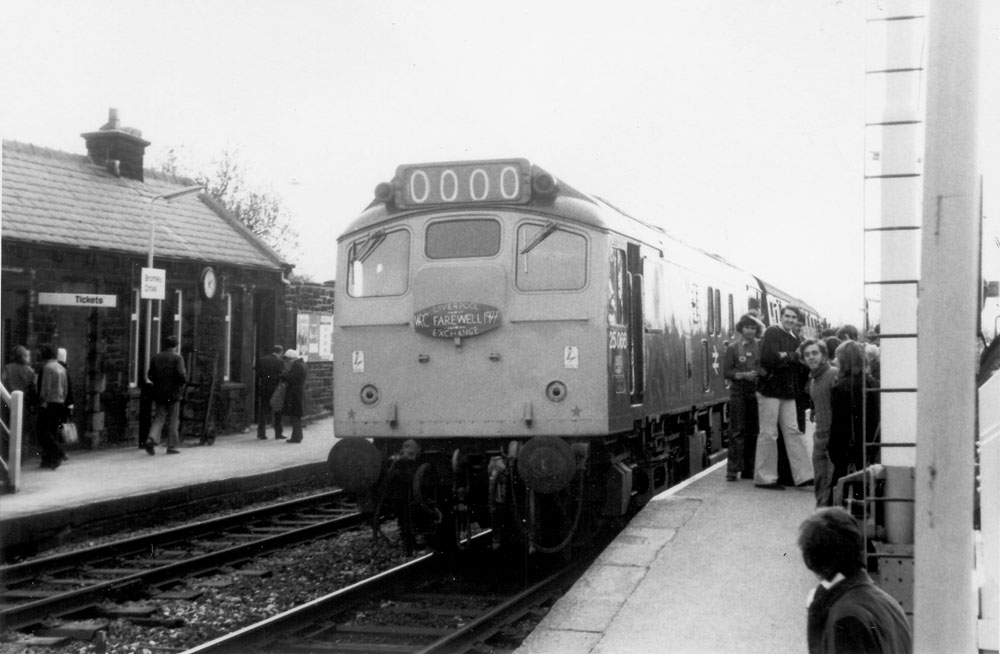 Photograph collection of webmaster
On April 9th 1977 the Wirral Railway Circle ran an excursion to recognise the closure of Liverpool Exchange station. The tour ran with 25066 and five coaches from Liverpool Exchange to Manchester Victoria. It is seen here at Bromley Cross. 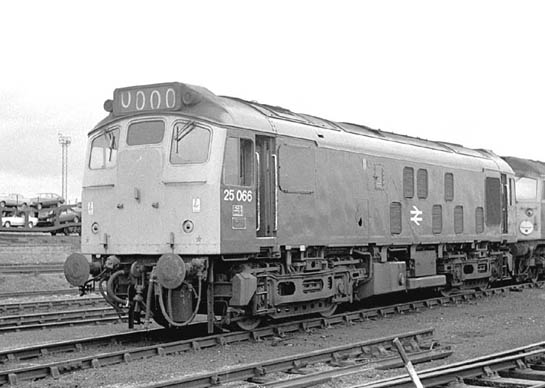 Photograph courtesy Tony Sayer
25066 at Millerhill on October 30th 1977. The nose end doors have now been sheeted over, the boiler room grill is now a solid plate and with this being the right side the ventilators show the typical top row with three, the bottom row with four.

On February 6th 25066 was receiving attention at Inverness depot.

March 11th saw four military specials run from Rosyth to Ludgershall. All changed locomotives at Newcastle, 1Z72 arrived behind 40030 and left with 25066 (HA) & 25232 (ED), this pair had brought in 1Z73 surrendering that to 47273. A strange maneouvre assuming it is reported properly, which would suggest that the pair of Class 25s were the only machines to make the whole trip, but having worked two separate trains!

On February 18th 26014 worked a northbound freight over the highland main line with 25066 as pilot from Perth to Aviemore, 25066 then returned light engine to Perth. On the morning of February 19th 25066 was noted passing Haymarket with a freight. 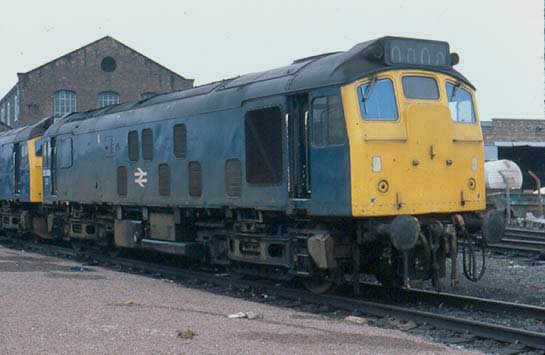 25066's final classified repair, an intermediate, was carried out at Glasgow Works during March - May. On entering the Works 25066 carried the non-standard Battery Isolating Switch Cover (three circular hinged discs), during the overhaul this was changed to the standard cover. After its release from Glasgow Works 25066 was quite active on a number of passenger services.

During November 25066 was transferred to Toton.

1981
During March 25066 was transferred to Cricklewood, this would be its last transfer.

25066's stay at Cricklewood was brief, a main generator flashover led to its withdrawal on June 21st 1981. Despite having recieved an Intermediate repair at Glasgow Works about a year ago, repairs would not be forthcoming. 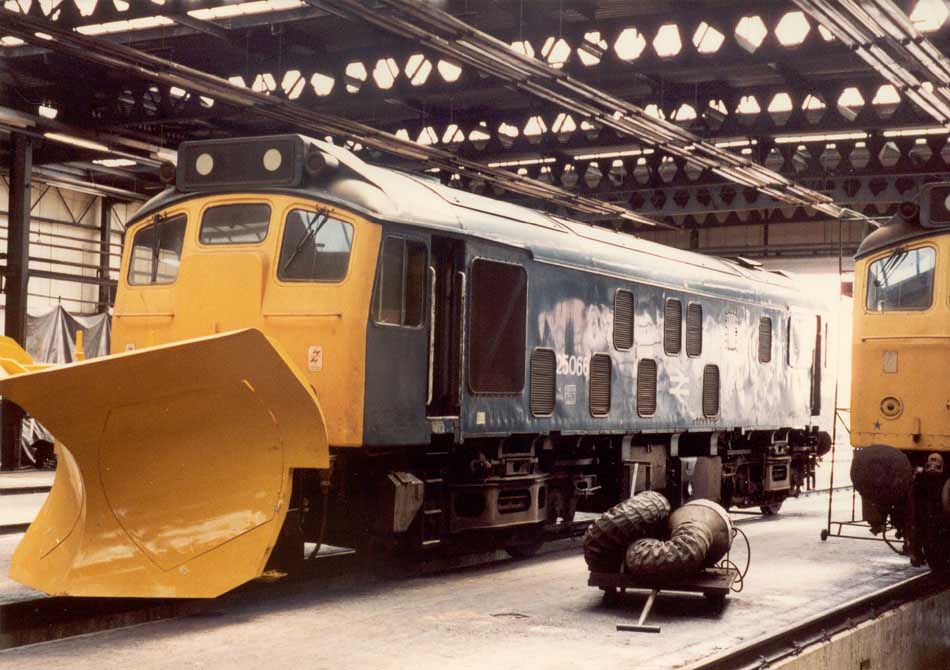 Photograph courtesy Jerry Glover
25066 at Toton on July 29th 1981 equipped with a fearsome looking snowplough. 25143 is on the right.

1982
As the year opened 25066 was still dumped at Toton but during February was moved to Derby Works.

1983
25066 had spent a year dumped in Derby Works, being stripped of spares before the remains were scrapped in February, just a few months short of her 20th anniversary.

With thanks to Mr B for the views below. 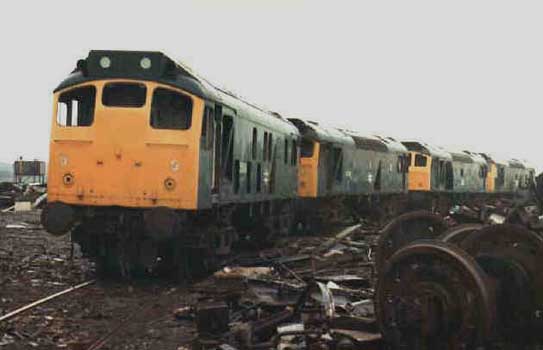 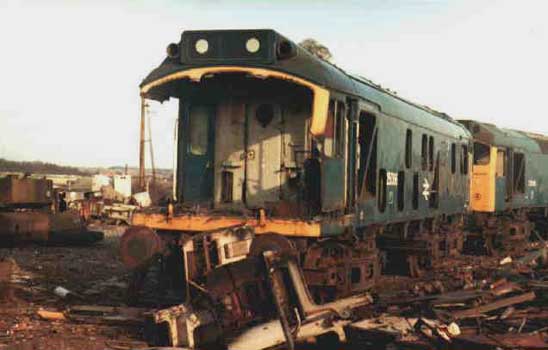 The cutters have started work on the line of Class 25s, 25066 is the first to be dealt with, the 'A' end cab is the first part of the locomotive to be cut. 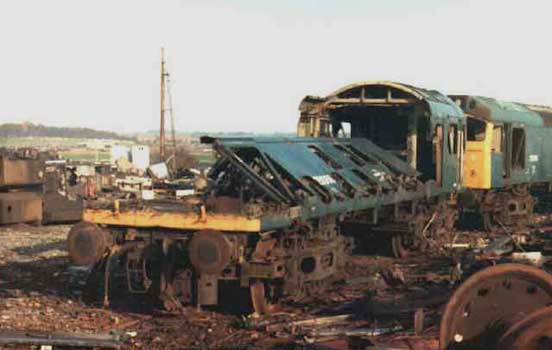 After the 'A' end cab has been disposed of, the roof and sides are next for the chopping block. 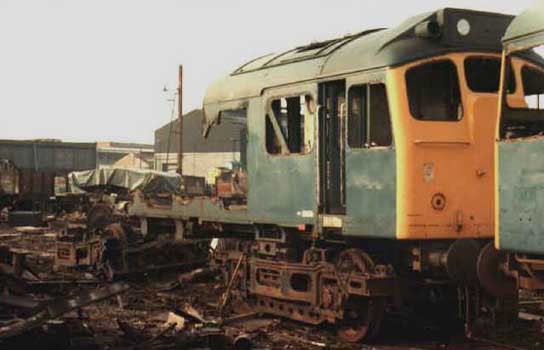 Next to go is the floor from the 'A' end cab back to the boiler room behind the 'B' end cab. The exposed bogie has then drawn the attention of the cutting crew. 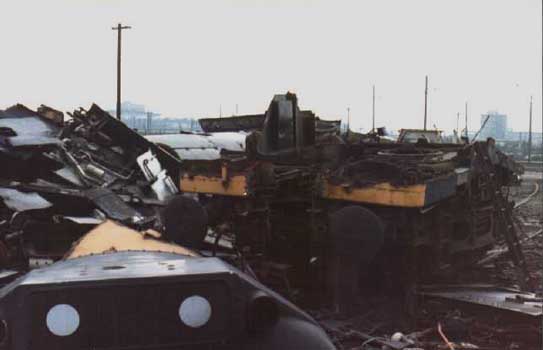 The 'B' end cab has been cut back to the frame level, now the floor is being chopped up, whilst the pile of scrap to the left grows larger. 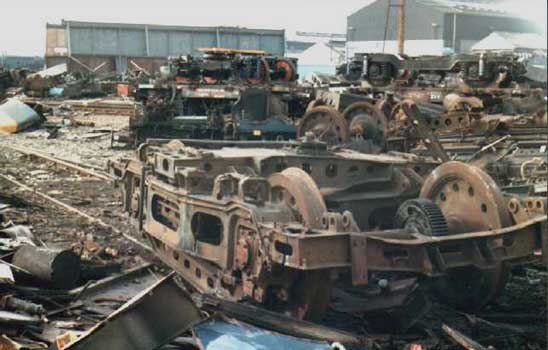 The end is near for one of the bogies, already the cutting crew have started to make cuts into the bogie frame. 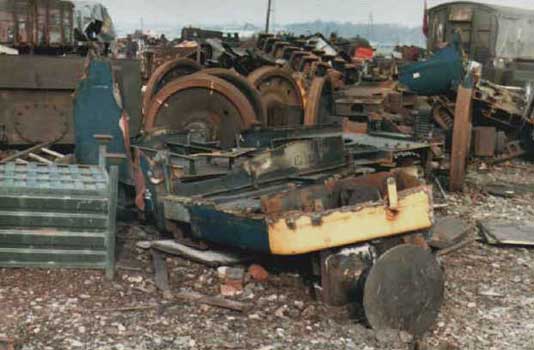 Part of the cab floor and a buffer has been tossed aside for the moment, whether it comes from 25066 is a hard to confirm, but it certainly signifies the end!