No.2 AM sticking and speedometer
Heater baffles
No.2 roof leaks around roof indicator
No.2 cab door lock handle and seal
Nos. 2 & 6 Bicera valve leak
A side crankcase door
No.1 cab floor 2nd man's side to patch
Traction motor interlocks. 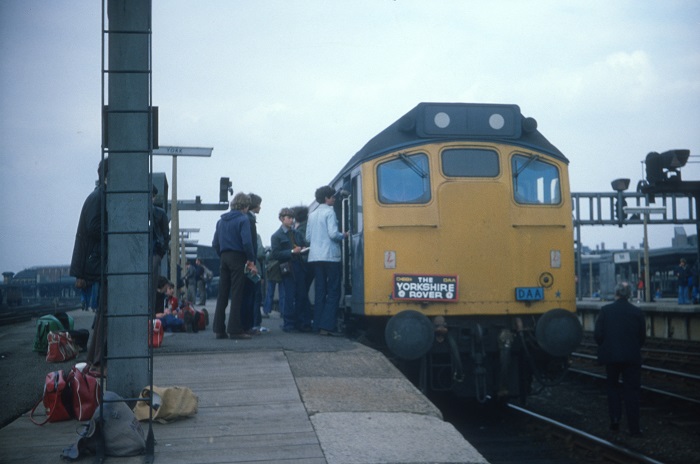 On the afternoon of May 2nd 25067 was noted with a down freight at Willesden.

December 5th found 25067 & 25114 in charge of the 39 vehicle 21.50 Northampton - Willesden freight, whilst passing through Tring thirteen of them derailed, three overturning, closing the slow lines for four days. On Thursday December 7th 25067 worked the 09.55 Willesden to Norwood and (presumed) the 12.10 Norwood - Willesden.

25067 was noted eastbound at Chester with a lengthy parcels train on February 28th.

1981
After about eight years allocated to Cricklewood 25067 moved north to Toton in February. 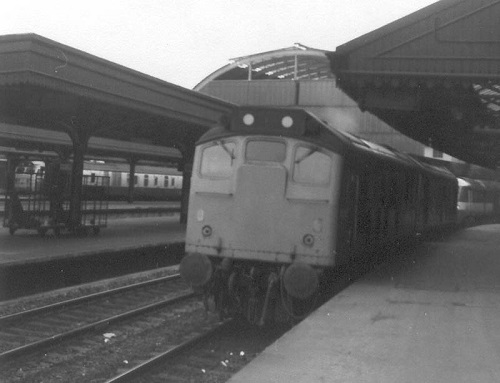 Photograph courtesy Mark Cook.
25067 & 25075 are released from the buffer stops at Paddington after having arrived with an excursion on March 14th 1981.

On the late afternoon of August 20th 25067 was southbound at Walsall with a trip freight. 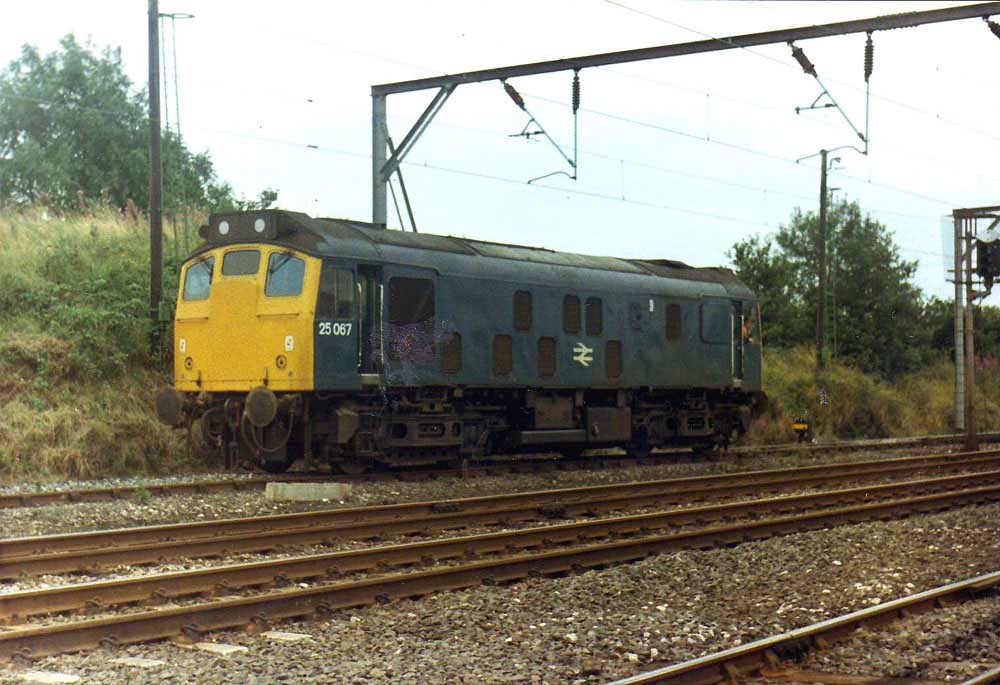 1982
After being allocated to Toton for about a year 25067 was transferred to Cricklewood during February, this would be its last move. Despite this move 25067 worked a mixed bag of passenger services during 1982.

On March 20th 25067 was noted light engine at Crewe station.

On July 23rd 25067 was southbound at Abbotswood with a short freight which included 03196, presumably en-route to Swindon.

25067 was noted at Cockshute stabling point on August 1st, the next day (2nd) it was noted passing Bescot with one engineers wagon and a brakevan. 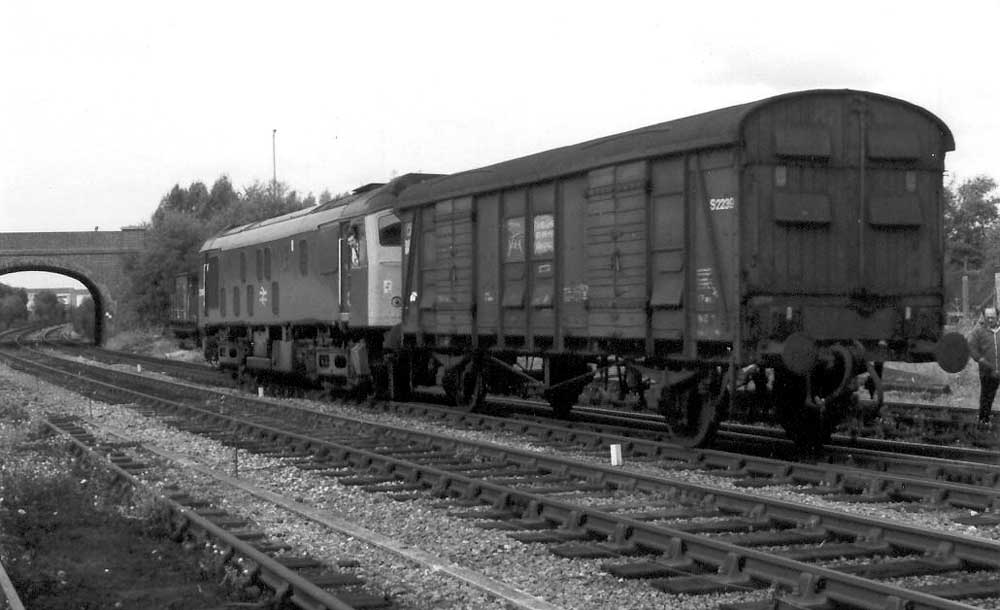 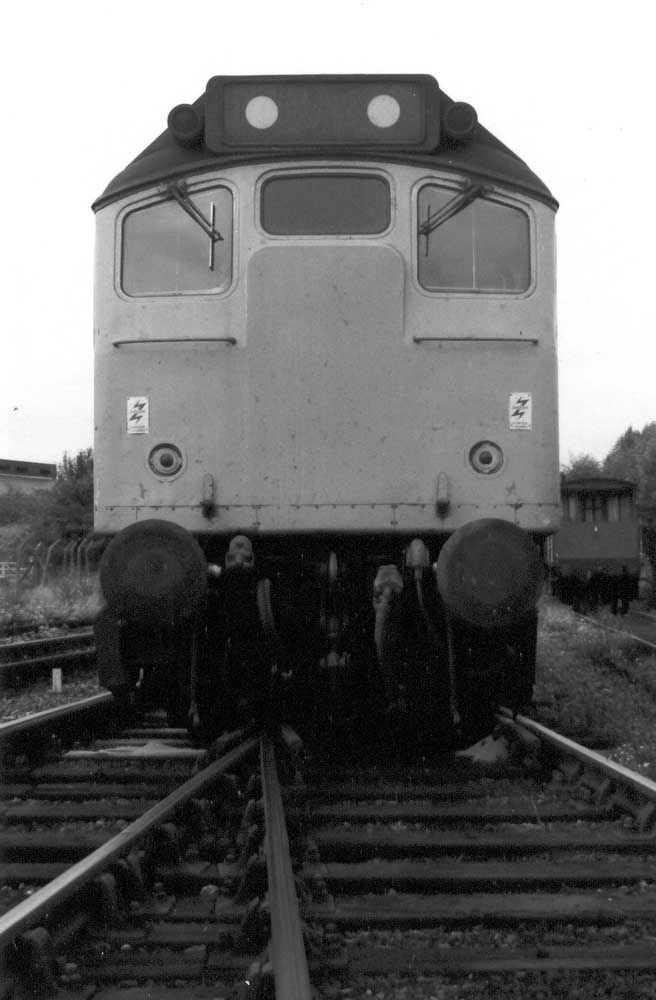 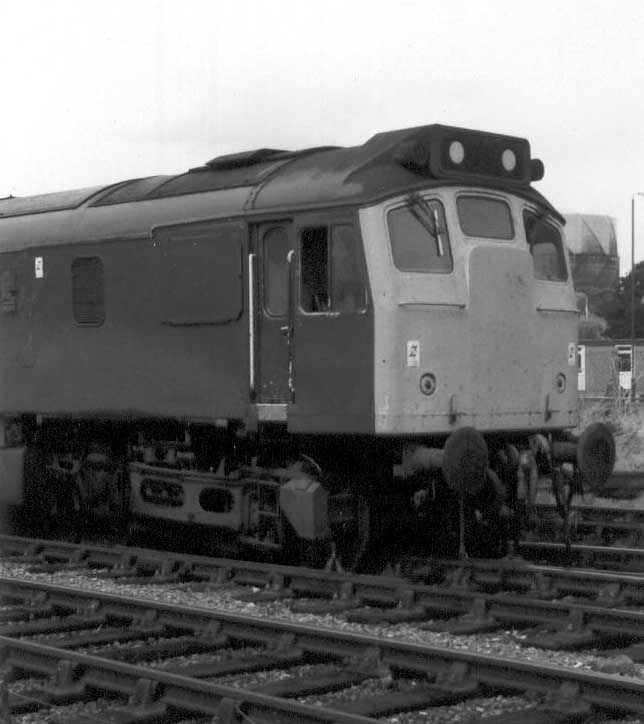 Photographs courtesy Mark Cook.
On September 22nd 1982 whilst shunting vehicles in the vicinity of the parcels facility, 25067 became derailed at a set of points. 25067 only had a few months left in service, withdrawal would come in December.

25067 was north of the border on October 25th working the 08.40 Carlisle - Glasgow Central and starting out with the return 13.45 Glasgow Central - Carlisle but failing at Glasgow Central Muirhouse Junction, 27023 dragged everything to Carlisle. All was well by the next day (26th) when 25067 worked the 10.00 Carlisle - Leeds and the 16.02 Leeds - Carlisle. It is perhaps ironic that the reported last workings for 25067 were a long way from its home depot of Cricklwood.

On November 19th 25067 was noted northbound through Cudworth with a loaded train of 60 Ford Transit vans.

1983
In the second week of May an Open Day at Kidderminster Goods Yard included 25202 and 25067 (withdrawn) as well as Tyseley diesel multiple unit set TS417 along with a number of other exhibits. The displays were to publicize the service improvements between Worcester & Birmingham. Presumably 25067 returned to Bescot for further storage.

Withdrawn 25067 moved from Bescot to Wellington on October 11th as one of the exhibits for a 'rail week'. This may have been similar to a rail week at Wrexham from October 1st that included withdrawn 40106 and was part of the advertising campaign to highlight the new Chester - Shrewsbury - London service. After this display 25067 was returned to Bescot.

1984
25067 was noted at Wolverhampton High level station on May 12th & 27th fully repainted and looking very smart, being seen with a Class 86 and an exhibition coach in the south bay.

1985
The GWR 150 celebrations intended for Swindon Works obviously never took place due to the impending closure of the Works. Closure notices officially appeared late in September whilst Vic Berry, Leicester had been called in for the removal of scrap from parts of the site. One piece of good news however was the successful bid on March 22nd 1985 for 25067 for preservation, the Type 2 awaiting movement from Swindon to its new home.