Wolverton Works held an Open Day on August 20th which besides featuring its regular diet of coaches and electric multiple units had 25069 and 81004 specially brought in for display.

On the morning of November 25th 25069 was noted at Exeter stabling point. 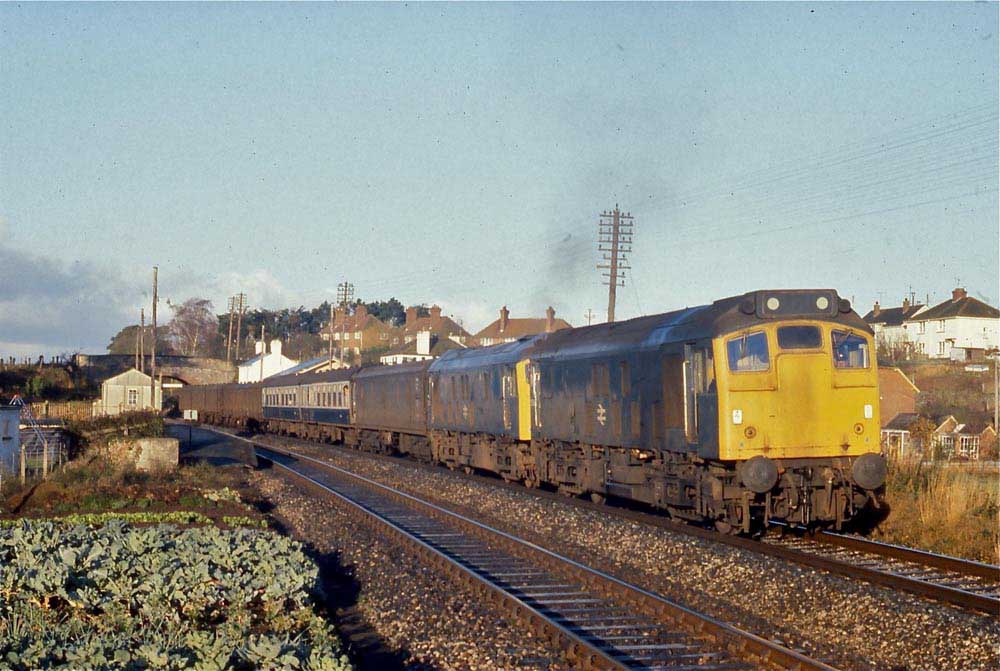 'The North-West Rambler No.2' railtour on a wintry January 13th was worked by 25069 & 25040 from High Wycombe to Basford Hall Sidings, it should have started from Marylebone but the late arrival of the stock saw a diesel multiple unit fill in as far as High Wycombe.

Photograph courtesy Barrie Watkins
Snow is on the ground at Stafford on January 22nd 1979 as 25069 runs through the station with what appears to be a short engineers train.

On September 7th 25069 was stabled at Willesden.

December 12th was a poor day for Class 25 reliability in the Northampton area. Included in the problems was 25069 on the 07.35 Northampton – Three Spires when the forty eight wagons were too much for the Type 2 and became stuck near Althorp. Assistance came in the rear from a following Willesden – Bescot freight, pushing as far as Rugby. On December 19th the 07.47 Manchester Victoria Bangor and the 11.30 Bangor - Manchester Victoria were handled by 25069.

On June 28th the 08.42 Sheffield - Huddersfield and 16.58 Huddersfield - Sheffield (being connections off the summer dated York - Llandudno and return) were worked by 25069.

During the early afternoon of October 12th 25069 and an inspection/instruction were noted at Richmond (LT/NLR side), staying briefly then departing towards Kew Gardens. On October 13th 25069 worked the 17.43 Nottingham - Leicester.

On April 2nd 'The Yorkshire Pudden' railtour from Plymouth was worked by 25069 & 25027 between Derby & Milford Sidings (out) and between Wakefield Kirkgate & Derby (back).

On April 24th 25069 was receiving attention at Cricklewood.

On July 31st 25069 was at Crewe Diesel depot parked next to the breakdown train.

25069 was stabled at Old Oak Common on October 8th. Both cab fronts had been freshly repainted, including the cabfront roof gutters. On October 10th the 09.00 Salisbury - Marylebone exhibition train which included 25069 was worked to Clapham Junction by 33006, the train was later noted at Wandsworth Town with just 25069 in charge.