The Royal Train was worked by 31257 from Victoria to Tattenham Corner on June 2nd for Derby Day, 25071 returned the Royal Train vehicles to the LMR.

Somewhat away from its regular haunts was 25071 on July 6th, working a Chipmanís weedkilling train from Watford to Horsham via Three Bridges.

On Wednesday September 27th 25071 worked light engine in the path of the 04.45 Norwood to Willesden.

1979
On February 10th the DAA organised the 'Nottinghamshire Collier', starting out at St Pancras with 25302 & 25071, taking the Midland mainline to Knighton South Junction, Coalville, Burton on Trent, Trent & Nottingham. Here 20030 & 20043 took over for a round trip to Annesley Colliery, on their return 25071 & 25074 were waiting to head north to traverse a number of lines in the Chesterfield, Sheffield & Shirebrook area. Joining the Erewash Valley mainline at Pye Bridge the charter headed south to Bedford before taking the former LNWR route via the Fenny Stratford flyover to Claydon LNE junction, to then head south through Aylesbury and Amersham to Marylebone.

25071 was noted passing Cricklewood on parcels duty on June 16th.

25071 was at Cricklewood depot on September 20th receiving attention.

The thirteen coach Deltic Discoverer railtour on October 27th was worked roundtrip Liverpool - Leeds by 25071 & 25125. Although the timetabling was somewhat loose the Class 25s despite losing time at certain points put in some good work and on the return leg reached Liverpool slightly ahead of schedule. The boiler on 25071 was non-operational.

On May 30th the 12.08 Birmingham New Street - Glasgow Central failed at Lancaster, 25071 took the train forward to Carlisle.

25071 was noted arriving at Norwich on June 11th with a passenger service from Birmingham. 25071 was noted westbound through Stonehouse with a train of scrap metal (21 wagons plus brake van) headed towards Gloucester on the afternoon of June 17th. On June 21st 25071 & 25051 worked the 08.02 Walsall - Yarmouth to Norwich, returning from there with the 14.15 Yarmouth - Derby. 25071 was the Manchester Victoria pilot on June 26th. 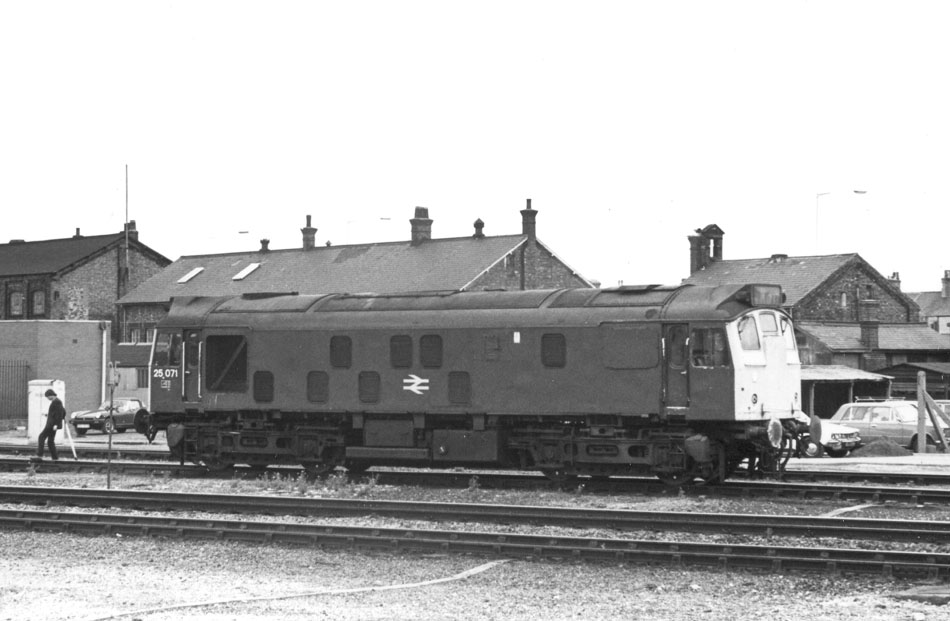 A short working on February 22nd saw 25071 assist the 21.50 Glasgow Central - Euston forward from Stonebridge Park due to the power being off for engineering work.

On May 30th a diesel multiple unit failure on the 14.23 Lancaster - Carlisle saw 25071 assist throughout.

A week after its last recorded passenger working, 25071 was withdrawn from Cricklewood on June 21st 1981. 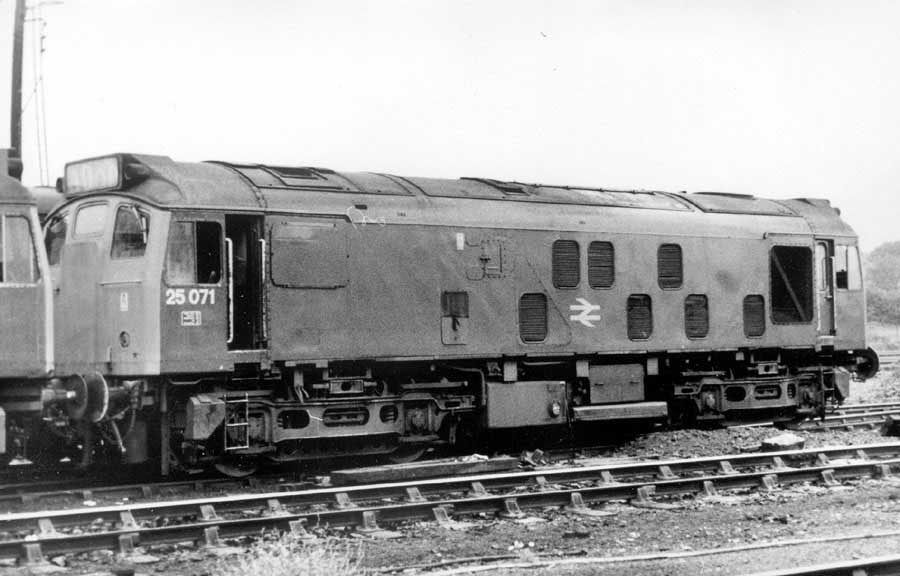