Speedometer to set up. 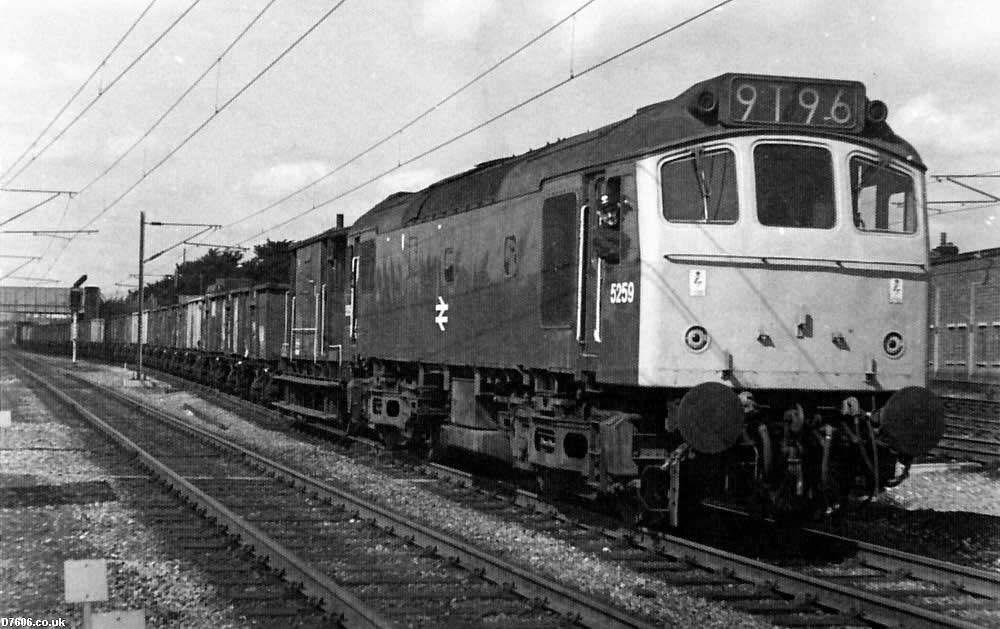 At about 6pm on September 25th 5259 was noted passing Manchester Victoria with an up freight (9T47).

At about 9am on December 19th 25109 was noted in Miles Platting yard with a train of hoppers.

1976
On February 2nd 25109 was noted on cement tanks at the new Strome Ferry cement terminal.

No.1 end leading, recordings from No.2 cab.

A side radiator sight glass
Bottom adaptor a ?? filter leak
No.2 speedometer.

On the morning of November 27th 25109 was noted at Chinley with a down limestone train.

On July 30th 25109 was noted at Five Ways (Birmingham) with a passenger service, covering a failure?

1978
After fourteen years on the LMR Eastfield became the new home of 25109 during February. 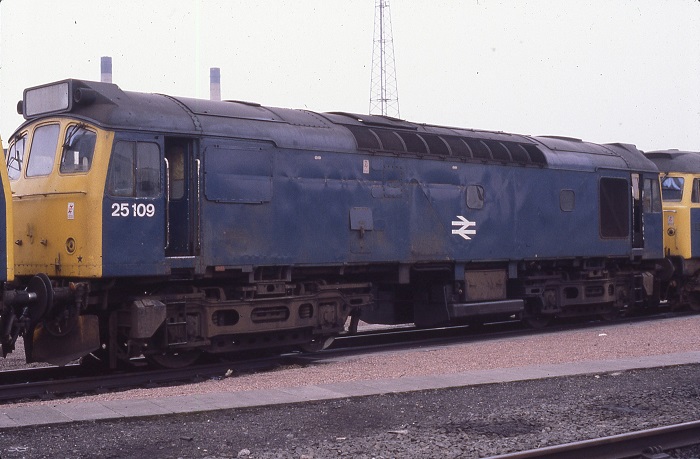 25109 received an intermediate repair at Glasgow from March - May, its last classified repair.

On June 9th very ex-works 25109 was stabled at Inverness.

On September 26th 25109 was stabled at Aberdeen Ferryhill.

1981
After three years at Eastfield 25109 was moved east to Haymarket during February.

25109 was noted light engine at Carlisle station on August 4th.

The early morning Warrington - Luton carflats was worked by 25109 on November 6th.

25109 continued to be a frequent performer on the Dundee/Edinburgh area services, on August 3rd it came to the assistance of 27010 somewhere near Inverkeithing on the 19.21 Dundee - Edinburgh. 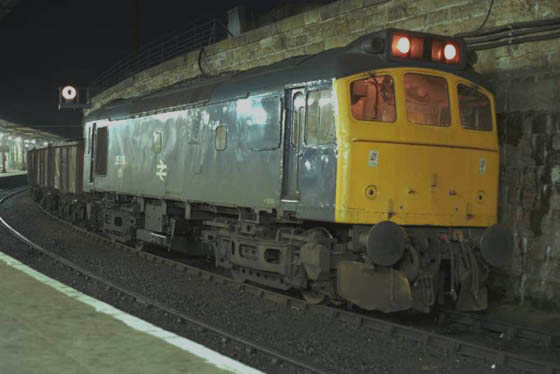 On June 1st the 13.35 Perth Yard - Millerhill speedlink was noted at Markinch with 25109 towing a Class 47 and three wagons.

The final transfer for 25109 took place in October with it leaving the Scottish Region headed for Crewe.

A gas pipe project in November brought pairs of Class 25s from Leith South to St Helens or Warrington, the trains of twenty six bolsters required banking between Garswood & Shaw Street. Noted on November 3rd were 25176 & 25078 banked by 25109. On a misty November 4th 25109 worked the 6T90 Arpley - Southport with a load of four coal wagons.

1983
On January 17th 25109 and three Mk 1s covered for a diesel multiple unit on the 16.35 Derby - Crewe and 18.30 return, attempts to obtain a locomotive that could heat the train for the return trip proved unsuccessful. 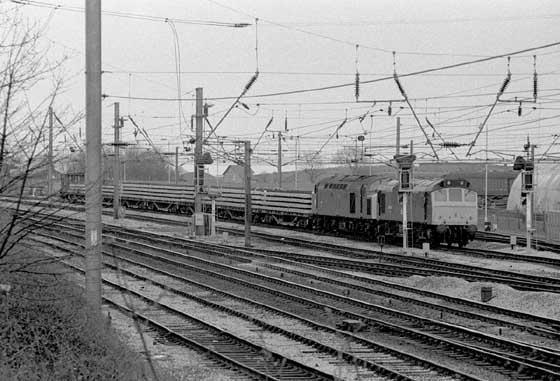 August 27th's 13.00 Skegness - Derby required the assistance of 25109 forward from Nottingham, the diagrammed locomotive, 45142 was removed here! The photograph below shows 25109 on its return at Derby about to take the stock to Etches Park.

On August 30th 25109 was noted southbound at York with an empty coaching stock working.

25109 was noted eastbound at Manchester Victoria with a short Railfreight working on October 11th.

Pre-Christmas travellers on December 21st's 23.00 Glasgow - Euston enjoyed the delights of 25109 & 25193 from Bletchley into Euston due to engineering work requiring the power to be turned off.

On May 11th when a Huddersfield - Leeds diesel multiple unit failed at Deighton, 25109 assisting as far as Leeds.

When a Blackpool - Ipswich charter failed at Stafford on July 9th 25109 took it forward to Nuneaton, where 47010 took over. The longest haulage for the year occured on July 14th when 25109 & 25199 made a round trip over the Cambrian, outwards from Wolverhampton, returning as far as Shrewsbury. On July 21st 25109 was stabled at Barrow in Furness.

It was back to the Lake District on August 27th when 25109 & 25205 worked from Carnforth to Ravenglass (& return) with a charter from St Pancras. A relief local working occurred on August 31st between Southport & Manchester Victoria.

On November 18th 25109 was at Aintree with loaded track panels as part of an engineering possession.

On December 20th 25109 was southbound at Preston with oil tanks.

On December 28th 25109 was at Derby with the evening Manchester Piccadilly - St Pancras vans. 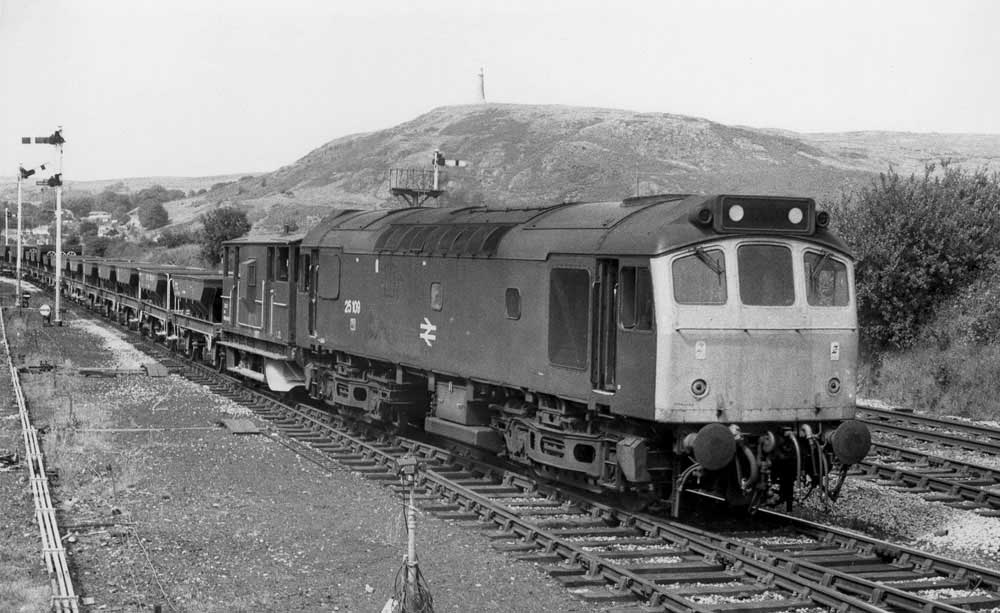 Photograph collection of webmaster.
On an unknown date 25109 marshalls a lengthy train of empty ballast wagons at Ulverston. In the background is Hoad Hill and the Sir John Barrow monument, Sir John being a native of nearby Ulverston.

25109's passenger workings in 1985 were even fewer than the previous year. When 47407 failed at Shrewsbury on March 3rd on a Euston working 25109 was on hand to take the service to Wolverhampton.

On March 22nd 25109 was northbound through Crewe Station with empty coaching stock. On March 28th 25109 was on banking duty at Camp Hill.

On May 3rd 25109 was westbound at New Mills with a local trip working.

May 11th saw 25109 and an unidentified Class 25 pass through Grindleford light engine.

Tyne Yard was host to two Class 25s on August 21st, 25109 took over the evening Parkeston - Mossend Speedlink whilst 25202 followed later that night with another Mossend bound service.

25109 was noted at Carlisle on October 10th. On October 25th 25109 worked the Holyhead RTZ to Humber coke covhops as far as ??, later this day 25109 worked the long distance Harwich - Glasgow between Manchester Victoria & Preston following a locomotive failure.

On November 8th 25109 & 97407 were noted eastbound at Chester with possibly the Holyhead - Manchester Red Bank empties, presumably the Class 25 had failed. On November 19th 25109 & 25064 were noted at Hereford on a Ravenscraig - Llanwern steel coils working.

On December 19th 25109 was working in the Willesden area.

With the Class 25s having a very bleak future, they were popular choices for the enthusiast railtour market. May 5th saw F & W Railtours 'Valley Explorer' (1Z26) run from Crewe to Cardiff including a number of valley freight lines. The 450 mile round trip was handled successfully by 25109 & 25057. By this time such high passenger mileages were becoming increasingly rare for the Class 25s, and to complete the trip without a failure was quite an achievement. On May 23rd 25109 was noted at Carlisle. On May 31st 25109 was noted southbound at Derby with empty coaching stock.

On September 20th 25109 was at Coleham Yard, Shrewsbury with a short engineers train.

A little off the beaten track on October 24th was 25109 working the local Whitemoor - Bury St Edmunds freight, whilst on November 15th and still on the Eastern Region 25109 was noted running light at Brigg attached to three other locomotives. 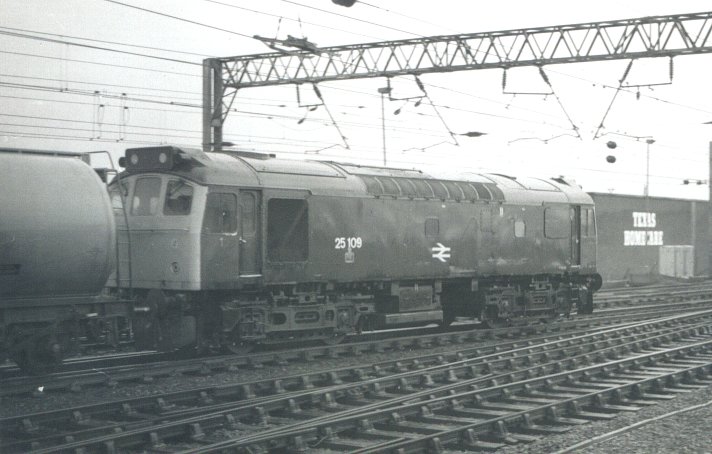 Photograph courtesy Paul Fuller.
Almost at the very end of a career spanning nearly twenty four years, 25109 is captured on a rainy November 25th 1986 at Carlisle. 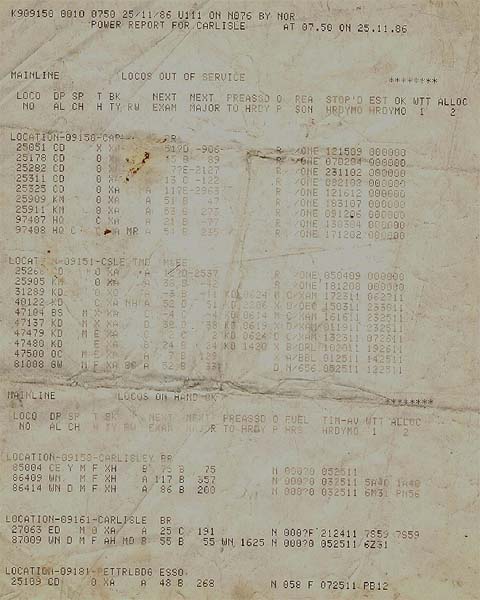 1987
January
The morning of January 1st found 25109 at Longsight diagrammed for the 1M25 to Derby, continuing with the 1M38 to Crewe. The evening of the 9th found 25109 at Crewe, the next day heading out over the Cambrian line, with 25191 to Machynlleth for several days ballast duties. Severe flooding on December 30th had caused much damage around Dovey Junction, especially east of Cemmaes Road. Strong winter storms hit the country from January 12th onwards, quite possibly the two Class 25s on the Cambrian may have seen service in snow clearance, 25109 still carried miniature snowploughs.

On the early morning of 16th 25109 was at Manchester Victoria handling several local jobs. The 17th saw 25109 & 25298 stabled in Manchester Victoria station. Longsight was visited late on the evening of 23rd, with 25109 at Manchester Victoria on January 24th (night-time), whilst a trip to Leeds was made on 25th in charge of the 1E28. Two days later (27th) local jobs were handled in the Newton Heath/Warrington area, eventually running light in the afternoon to Stanlow & Thornton to pick up the 6J28 oil tanks to Aberystwyth. By the 29th 25109 was back in the Chester area at least until February 1st.

February
Just after midnight on February 9th 25109 was at Crewe and appears to have made a round trip light engine move to Willesden on 12th. Remaining in the Crewe area until 15th another run was made over the Cambrian to Machynlleth, arriving just before lunch on 16th (on the 7L39?). The following two days (17th & 18th) were spent in the Shrewsbury area. 25109 was stabled at Shrewsbury station on February 19th.

February 21st & 22nd were spent around Crewe, trips including the 21st's 3K02 05.00 Crewe - Liverpool Lime Street, noted back at Crewe at mid-day on 23rd, then light engine to Chester on the evening of 24th.

The afternoon on 27th saw yet another visit to Machynlleth, also being noted there on March 1st.

March
By 5th 25109 was at Crewe Diesel depot, believed attached to 25059, though 25109 was scheduled for an 'A' exam this day. This was successfully completed by the 6th, with the locomotive yet again off to Machynlleth. The locomotive now carried the neatly stencilled name Castell Trefaldwyn/Montgomery Castle above the number. Upon arrival here 25109 was diagrammed for the Pwllheli local, being noted on March 8th at Pwllheli with two loaded ballast wagons. This was almost certainly the last Class 25 to work over the line to Pwhelli.

By mid-day on March 11th 25109 was back at Crewe for the final time, the locomotive was quickly taken out of service and placed off the roster. On March 16th the short move was made to Basford Hall, remaining here until July 14th when 25035/57, 25109 & 25265 were towed from Crewe to Vic Berry's, Leicester. Ironically of this batch of locomotives only 25109 would be broken up, the three others escaping eventually to preservation.

Distinguishing Features
No.1 end cab front: brackets and center lamp brackets removed: at least August 1977 until withdrawn.
Non-standard Battery Isolating Switch Cover - three circular hinged discs: A Scottish modification carried out by the depots. 25109 was released after its last Classified repair from Glasgow Works with the standard Battery Isolating Switch cover. Sometime between September 1981 & September 1982 the non-standard modification was made to the cover. After its transfer to the LMR the modified cover was retained until withdrawn.

(With thanks to Neil Cannon for making available the TOPS reports for 1987 & Alan Baylis for the passenger workings).