25118 was noted at Hexham on December 6th with the local pick-up freight.

1977 saw five consecutive days of trips to Skegness. These started on July 7th with 25213 from Derby. The next four trips were with 25132 from Derby (11th, 12th & 14th) and Leicester (13th), but returning only to Nottingham on a relief train. The following month 25118 ventured to the other side of the country. On August 6th 25118 worked the Nottingham - Llandudno Town roundtrip, followed up on August 21st working the 08.45 Birmingham New Street - Barmouth to Shrewsbury and return with 25254.

1978
On May 31st 25118 was westbound at Nottingham Midland with a lengthy mixed freight.

On September 5th 25118 was noted at Walsall with bogie flat wagons loaded with steel and loaded coal wagons.

A working that frequently attracted unusual traction was the Gloucester - Birmingham New Street leg of the 15.07 Plymouth - Manchester Piccadilly, on March 22nd 25118 handled this working.

A month later on July 7th 25118 & 25133 worked the 08.52 Leicester - Skegness and 12.32 return. On July 21st 25118 was stabled at Llandudno Junction. On July 22nd 20153 & 20165 worked a North Wales Railway Circle railtour from Crewe and Bangor to Blaenau Ffestiniog in connection with the Conwy Valley Railway Centenary celebrations. 25118 was provided to assist with the run-round shunt by taking the stock onto the Trawsfynydd line. 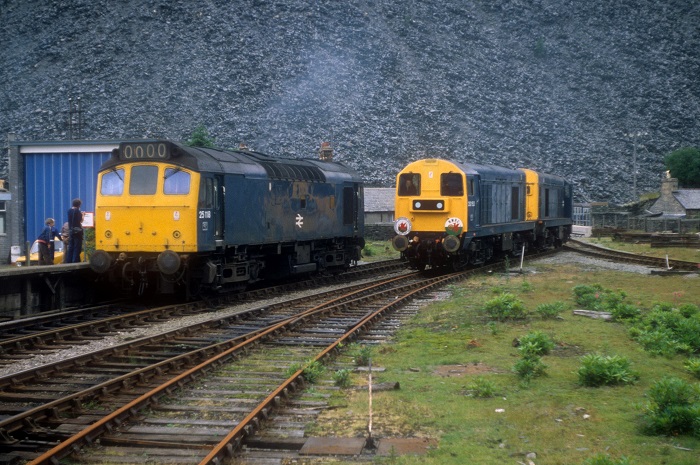 On the morning of November 2nd 25118 was noted passing Broxbourne light engine headed for March, possibly having worked up to Temple Mills earlier in the day.