In the early morning hours of November 19th 25168 was noted at Exeter stabling point.

On January 5th 25168 was noted at Exeter stabling point.

It was railtour duty on June 26th with 25168 & 25293 working an M&GNJRS charter roundtrip between Llandudno Junction and Blaenau Ffestiniog, the train having started from Euston.

1977
On February 26th 25168 was noted at Newport with a Scunthorpe - Cardiff Tidal sidings freight carrying steel bars for the GKN works.

On July 2nd 25168 was noted at Chester with a parcels train.

1978
On July 28th 25168 was noted passing through Colwyn Bay with a brakedown crane and three support vehicles.

On March 2nd 25168 was noted at Chester with a southbound freight.

On the morning of November 3rd 25168 was noted at Crewe on up empties.

On December 13th 25168 was called out to rescue a lunchtime Worcester - Hereford multiple unit which had run into cows near Ledbury. 25168 took the multiple unit to Hereford, both remaining here overnight before leaving for Bristol.

25168 was noted at Llandudno Junction with a permanent way train on November 22nd.

On February 27th 25168 was the Manchester Victoria banker.

On March 2nd 25168 was on banking duty at Manchester Victoria. 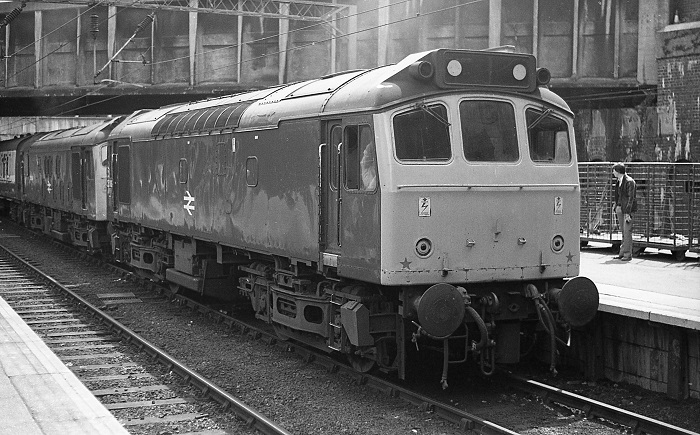 Photograph collection of webmaster.
25168 & 25049 at Birmingham New Street on June 12th 1982 having taken over the 1J24 Euston - Aberystwyth which they will work to Shrewsbury, although 25049 will fail at Wolverhampton.

The Shopping Proposal dated May 13th 1983 for 25168 changed its status to scrap. The locomotive had been stopped at Crewe depot on May 12th 1983 because the overspeed trip failed to shut down the engine, the turbocharger was seized, possibly hydrauliced. Contained in the proposal were the following details:

Photograph collection of webmaster
An undated view of 25168, presumably near the end of its career. The boiler room grilles have been sheeted over.