On June 18th the APT failed at Weedon with pantograph problems, 25173 was sent from Rugby to assist.

When 40033 failed at Stalybridge on May 30th's 09.08 Scarborough - Llandudno it was left to 25173 to take the train forward. However on reaching Warrington the Class 25 succumbed, requiring 40140 to complete the journey!

On the afternoon of July 27th 25173 was light engine at Wellingborough.

An 'E' examination was carried out at Crewe during September. 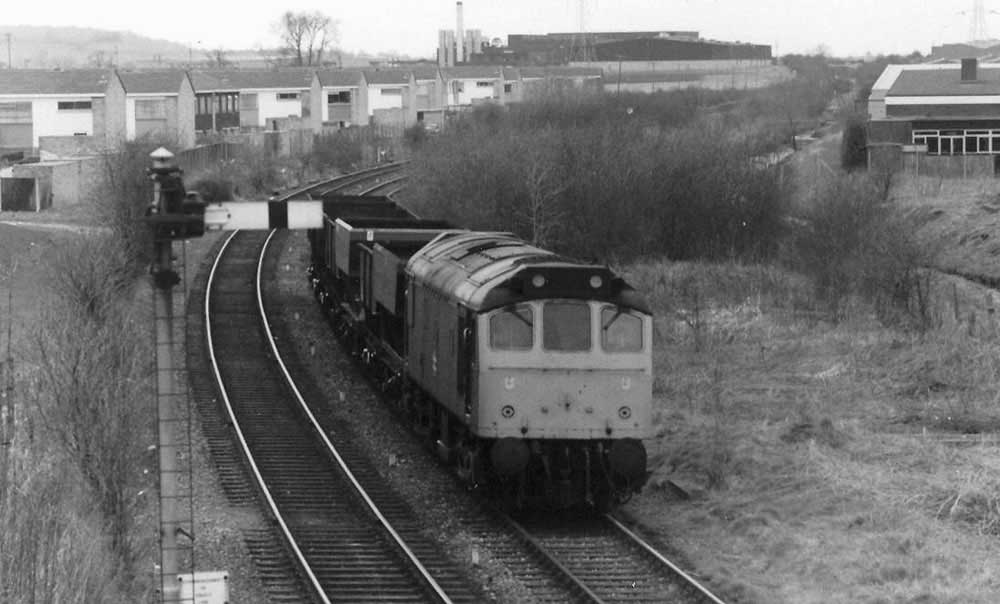 Photograph courtesy Mark Cook
25173 with a short train of coal hoppers is seen in the Aylesbury area on March 10th 1982.

On August 12th 25173 was noted southbound at Sellafield with loaded bogie steel wagons from Workington. On August 22nd the 20.45 Barrow - Euston with 86218 was assisted between Watford Junction & Willesden by 25173 due to the power being off for engineering work.

On September 5th 25173 assisted two electric services between Watford Junction & Willesden due to the power being off for engineering work.

On August 21st 25173 & 25191 dragged an electric service behind 86207 between Bletchley & Rugby, the power off for engineering works. 25173 & 25161 were noted passing Crewe on August 25th with the loaded sand wagons from British Industrial Sands Ltd, Oakamoor to Ravenhead Glass, St. Helens.

On a snowy December 12th 25173 was noted light engine at Banbury.

On April 2nd 25173 was stabled at Kingmoor. On April 4th the 1M12 14:10 Cambridge – Blackpool service failed at Preston behind 47491. Cheers from watching enthusiasts arose when 25173 was seen coming off Ladywell House sidings to take the train forward to Blackpool. 25173 was noted at Carlisle station on April 4th on passenger stock. On April 24th 25173 as noted at Princes Risborough with three empty wine tankers destined for Acton and return to the continent. On April 26th 25173 was stabled at Bletchley.

For reasons unknown 25173 took over the 11.45 Cardiff - Crewe on August 27th (deputising for the regular Class 33) and continued with the diagram until lunchtime on 30th. On each day one round trip was made, except for August 29th when two trips were run giving a total of 556 passenger miles, the highest daily total for any Class 25 in 1984, although it was jointly shared with 25211 which ran the same number of miles on August 24th.

On September 20th 25173 worked the late evening Preston - Barrow service, returning the next morning on the 07.33 Barrow - Preston, assisted by 25206 from Dalton Junction.

On March 12th 25173 worked the daily morning Ashburys - Dowlow trip, with the bulk of the consist containing five covered hoppers for Dowlow and numerous cement PCAs for Earles sidings.

25173 & 25229 were diagrammed on May 2nd for the first part of a Birkenhead North to Wolverton unfitted special, taking an electic multiple unit to Works for repair. Later that day a diesel multiple unit failure brought out 25173 to cover a late evening Manchester Victoria - Blackpool working.

25173 was in the Derby area on June 13th being noted alongside the station with Railfreight wagons and noted southbound at Long Eaton with with an engineers train including electrification vehicles. By June 18th 25037 & 25173 were noted at St Helens Junction with an Oakamoor -Ravenhead sand train. 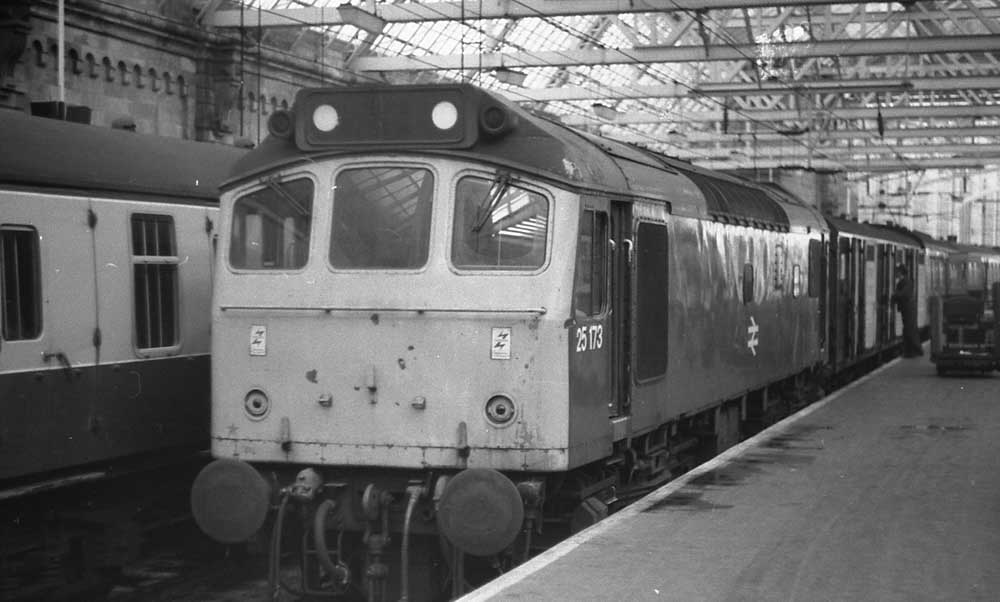 Photograph courtesy Richard Howat
On the same date as the opening view, July 17th 1985, 25173 has completed its journey with the 17.40 Carlisle to Glasgow Central.

By July 20th 25173 was in the Manchester area being noted on a Redbank parcels working at Manchester Victoria. On Sunday July 28th a special diesel multiple unit service was operating from New Mills Central to Buxton via Chinley & Peak Forest, a reversal was required at Buxton yard in order to enter the station. The multiple units were 52049, 59390 & 51927, the service operated on Sundays during July and August. Included in the fifteen locomotives on Buxton depot this day were 25173 & 25213.

25173 was still in the Manchester area on August 1st, being noted passing Manchester Victoria with a short civil engineers train. 25173 was the Manchester Victoria pilot on August 5th. August took 25173 on a couple of seaside visits, on August 7th a round trip Manchester Victoria - Bangor working took place, the eastward working did in fact run through to Newcastle, passengers forward from Manchester had to suffer the abomination of 31165. The next day (8th) 25173 was on banking duties at Manchester Victoria, whilst on August 9th it was noted at Warrington Arpley. On August 20th 25173 was noted at March with a train of merry-go-round hoppers. The next day (21st) 25173 covered a four coach 09.39 Long Eaton - Skegness relief (which should have started at Derby), the return working only going as far as Nottingham as the 1Z98 18.35 relief working. Was this the last Class 25 to reach Skegness? On August 22nd 25173 worked the 3M38 03.29 Leeds PCD to Birmingham Curzon Street PCD.

Another short hop took place on October 24th with 25173 working between Blackpool & Preston on a morning Euston bound service.

25173 was noted at Hereford on October 6th with a train of continuously welded rail. 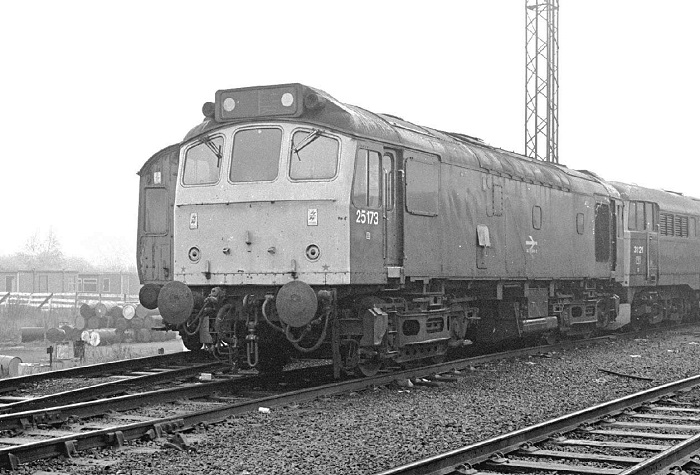 Present at Immingham on March 4th working steel empties was 25173, two days later (6th) the locomotive handled a Bescot - Banbury freight. On March 7th 25173 was noted at Didcot delivering a steam locomotive and tender, both on low flat wagons, it was also noted this day at Bristol Bath Road. On March 11th (or 12th) 25173 worked the 08.46 Leicester - Birmingham New Street, filling in for a diesel multiple unit failure. 25173 and four Class 20s were noted arriving at Warrington Arpley stabling point on March 29th. 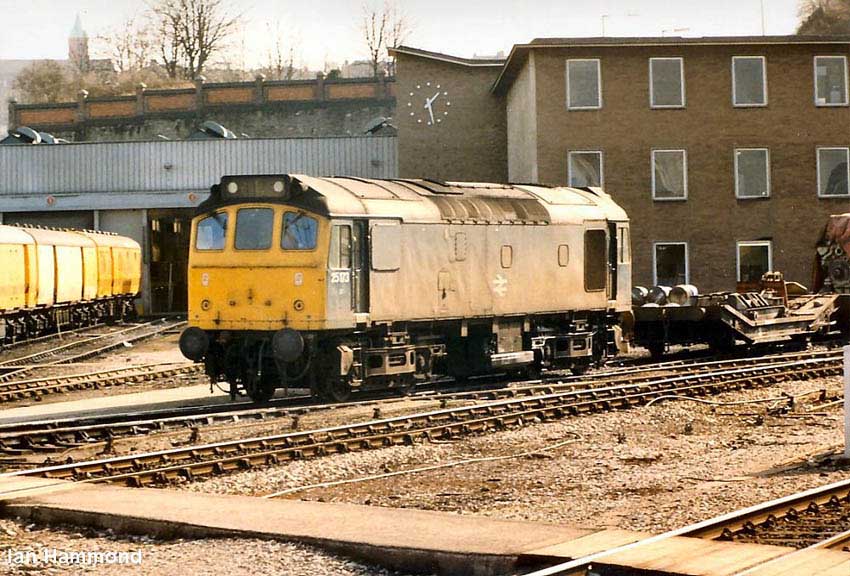 On May 7th 25173 worked the empty oil tanks from Aberystwyth to Stanlow(?) On May 8th the 16.20 Holyhead - Euston failed at Colwyn Bay behind 47448, 25313 pushed the train to Rhyl where 25173 took the service to Crewe. On May 24th 25173 was noted at Manchester Victoria with parcel vans for Red Bank sidings, and later noted with 25059 as the Miles Platting banker. On May 27th 45131 failed shortly after departing Manchester Victoria with the 12.03 Liverpool - Scarborough. The train was reversed back into platform 12, where the station pilot 25173 was attached to take the train forward to York where the service was terminated. 25173 was noted at Warrington Bank Quay with permanent way vehicles on May 29th.

25173 was noted at Llandudno Junction on June 12th shunting two Presflo (?) wagons. On June 18th 25173 was eastbound at Colwyn Bay with a lengthy train of hopper wagons. 25173 was the station pilot at Manchester Victoria on June 27th.

25173 was noted passing through through Crewe station with a mixed freight on August 7th. On August 21st & 23rd 25173 was noted stabled at Stoke on Trent station. 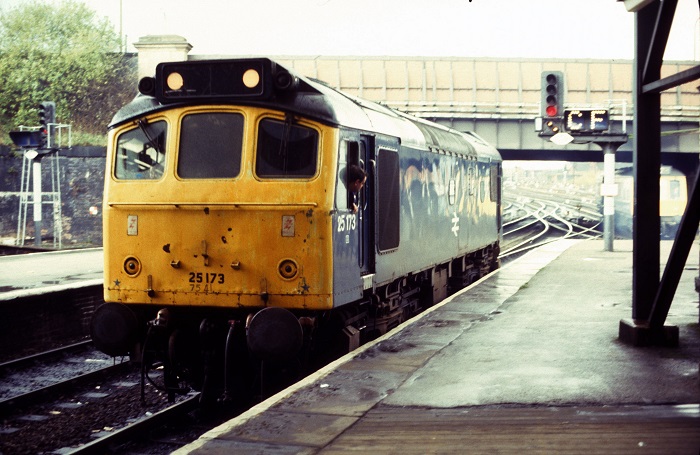 On December 22nd 25173 was noted through Stafford on loaded sand or stone wagons. For 25173 much of the Christmas week was spent in the Toton area, being noted there on 24th & 29th and January 2nd.

From March 3rd to 9th 25173 seems to have worked many miles between Carlisle and Ayr on the 3S07 & 5S07 and return workings. On 8th a side trip, the 9Z61 to Barassie was made. At lunchtime on March 12th 25059 was at Dumfries. By lunchtime on March 16th it was back to Manchester Victoria to handle the 6Z45 to Basford Hall, then light engine to Newton Heath. Here it worked the 0J18 to Stalybridge and 3J18 to Manchester Victoria. On 17th a morning trip was made to Ince Moss, getting back to Manchester Victoria at 12.35 Also handled was the 4P05 Mayfield to Preston. March 18th saw it work the 3J04 05.08 Bangor - Red Bank parcels and later the 0K37 to Guide Bridge followed by the 6K37 to Nuneaton Hartshill, returning with the 7H55 to Guide Bridge. The final working for 25173 was the 6Z40 07.30 Glazebrook - Parkeston Quay on March 19th as far as Crewe, here it was removed from the train and taken out of service. 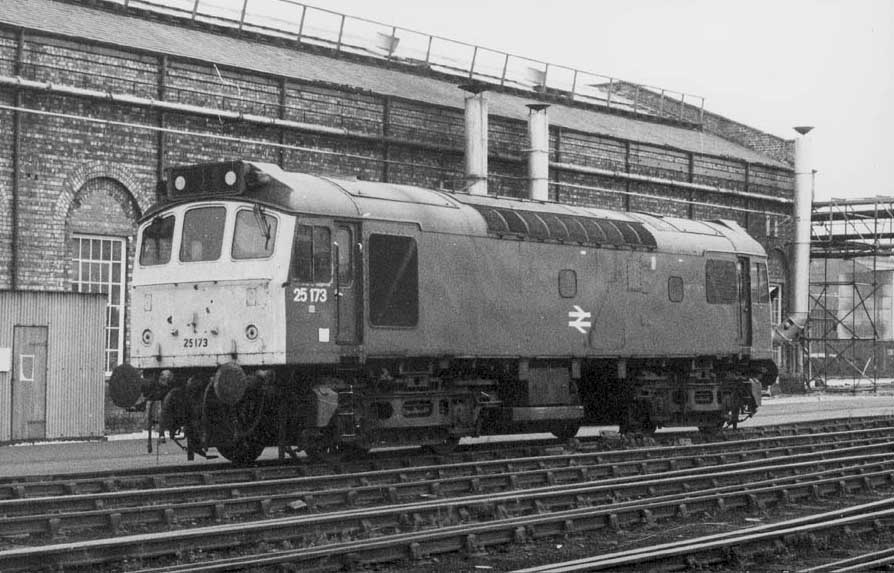 Photograph collection of webmaster
25173 at Crewe Works for repair following its purchase for preservation - seen here probably in the last quarter of 1987.

Distinguishing details
No.1 cab front: number stencilled on cab front in black: May 1986 until withdrawn (not carried on the No.2 cab front).
No.1 end cab roof, drivers side: significant areas of missing paint: June 1984 - August 1985.

With thanks to Alan Baylis for the 1984/85 passenger movements & to Neil Cannon for the comprehensive 1987 TOPS movements.