The summer holiday 'weeks' in a number of the Midland towns brought increased traffic to the regular services and the usual extras. Leicester's holiday period commenced July 3rd with a heavily strengthened London service and extras to Skegness with 25176 & 25178 and to Yarmouth with 25165 & 25280.

September & October for 25176 were spent at Derby under repair, including the fitting of dual-braking equipment.

On May 29th 25176 was eastbound through Guide Bridge with a mixed freight.

On the afternoon of October 26th 25176 was southbound light engine at York. 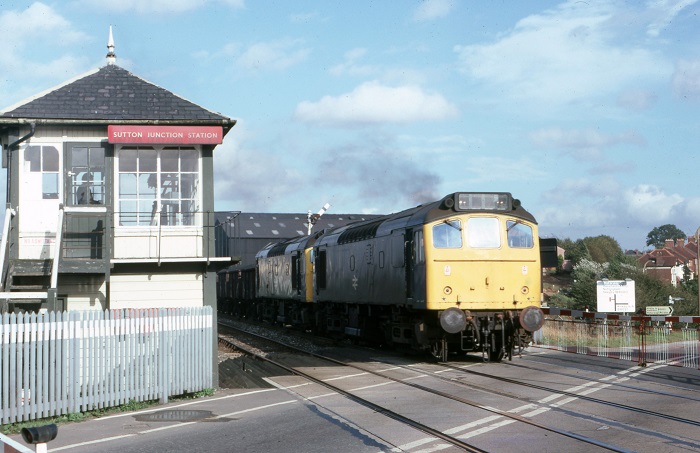 25176 was noted at Wakefield Kirkgate with flat wagons carrying steel girders on a gloomy November 13th.

On a snowy December 11th 25176 with snow ploughs at each end was noted passing Market Harborough on the up line.

25176 was northbound at Bedford & Sharnbrook with ballast wagons on August 3rd.

Blea Moor was a poor place for 47455 to fail whilst working a charter on October 30th. The train had stopped to detach pilot 31115 (from Hellifield), but was unable to restart, ninety minutes passed until 25189 & 25176 arrived taking the train on to Culgaith, where they were replaced by 37048 for the run to Carlisle.

New traffic flows of gas pipes in November brought pairs of Class 25s from Leith South to St Helens or Warrington, the trains of twenty six bolsters required banking between Garswood & Shaw Street. Noted on November 3rd were 25176 & 25078 banked by 25109 whilst the next day produced 25059 & 25180 banked by 40090.

On the afternoon of January 27th 25176 ran light from Holbeck to Leeds PCD then worked the 1V23 to at least Sheffield.

For 25176 December 1983 & January 1984 were spent at Derby, with unclassified repairs made to the power unit, a visit to Derby by this time was a risky venture as many Class 25s went in for minor repair work and were condemned following the discovery of more serious woes. Many that found themselves in this unfortunate position did provide many spares to keep the ever dwindling fleet running a little longer. 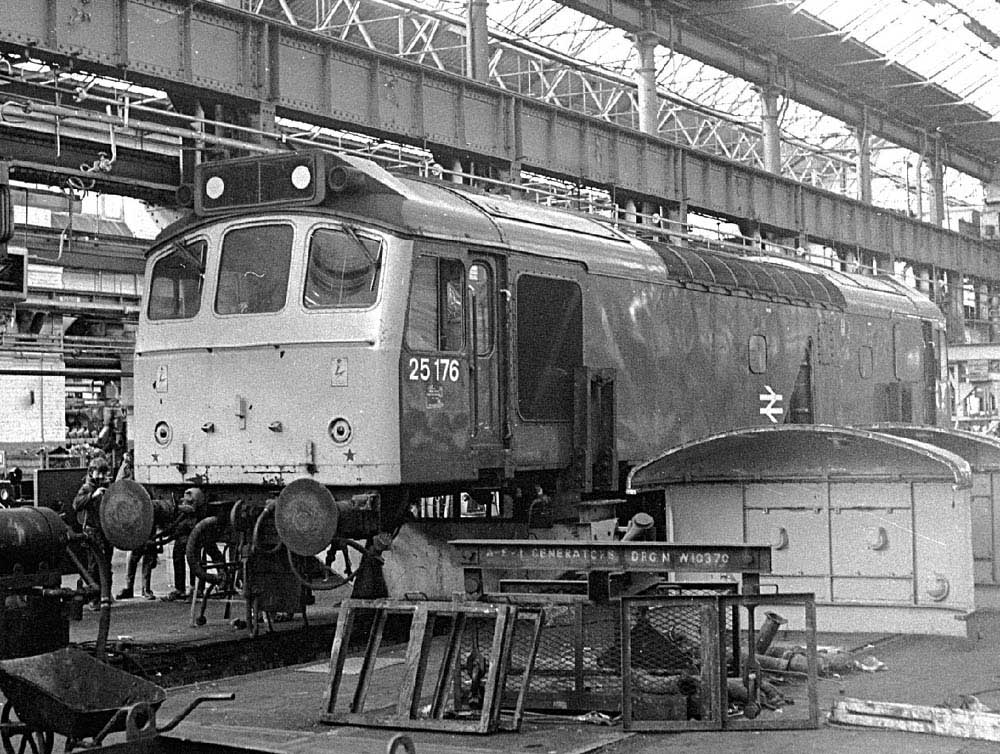 On March 6th 25176 was at Manton Junction with cement hoppers.

Swindon finally received three Class 27s from Scotland for repair at the end of April, they were noted arriving at Gloucester on April 26th behind 25176. 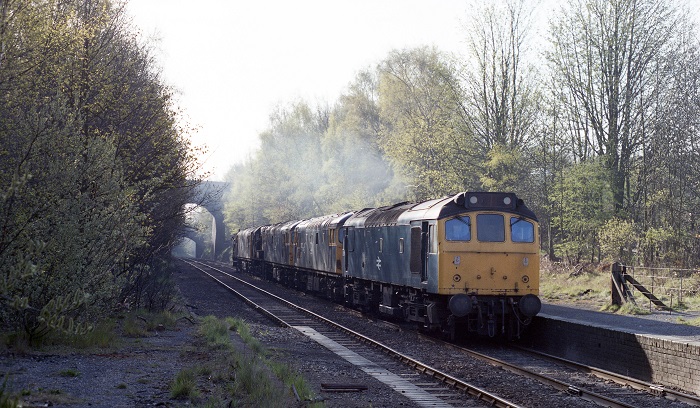 Passenger workings for 25176 in 1985 were scarce. The first came on March 28th dragging a diverted Euston - Liverpool service between Warrington & Liverpool Lime Street.

When the 10.10 Holyhead - Euston failed at Chester on September 3rd behind 47453 it was left for 25176 & 25200 to drag the whole ensemble to Crewe, this pair were later noted on a Ravenscraig - Llanwern coil train. On September 29th 25176 was receiving attention at Crewe Diesel depot. 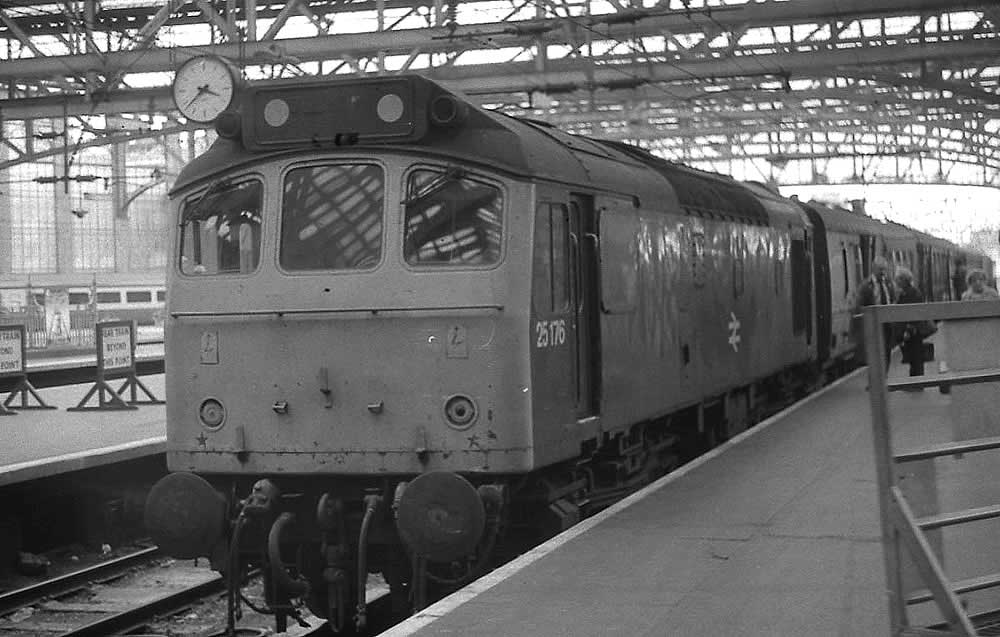 Photograph courtesy Richard Howat
Late in 1984 25176 moved north to Kingmoor, leading to possible passenger duties, in the summer months on the Carlisle - Dumfries - Glasgow service. At an unknown date (presumably in 1985) 25176 stands at Glasgow Central with just such a working.

On November 22nd 25176 was noted taking the York avoiding line with a very lengthy train of engineering vehicles.

On the North & West route on December 4th 25176 became a failure on a northbound freight, rescued by 31134 and dumped temporarily at Hereford. 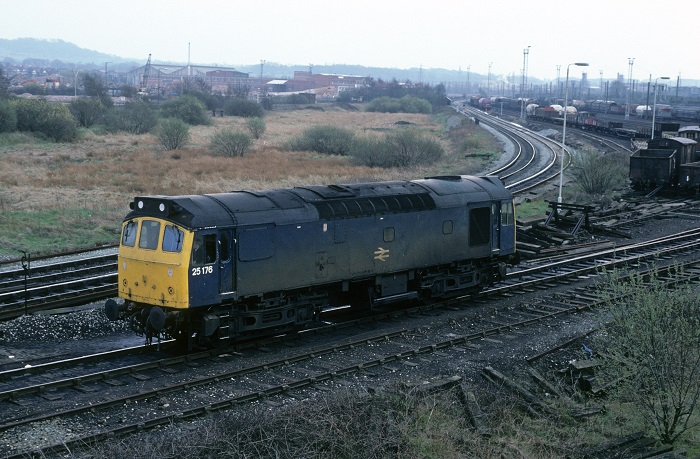 25176 was stabled at Rugby station on May 11th and at Machynlleth on May 26th. On May 27th 25176 was southbound at Milton Keynes with parcels vans from Northampton.

On June 2nd 25176 was noted passing Alsager with empty ballast wagons. By the summer Class 25s arriving at Hereford from the north were usually turned round here due to the diminishing number of South Wales crews trained on them. On June 4th 25176 and 25265 arrived on separate freights and were taken off, though 25265 remained in the area on permanent way workings.

On July 12th 25176 was noted at Caersws with a breakdown train headed for Machynlleth. On July 16th 25176 hauled 40046 from Moreton-on-Lugg to Crewe on the first part of its journey to Doncaster Works for scrapping. On July 23rd 25176 worked the Stanlow - Aberystwyth fuel tank train, comprised of fourteen short wheelbase tanks. On July 31st 25905 & 25176 worked an Over and Wharton - Inverness rock salt train as far as ??

On September 3rd the 21.10 Euston - Stranraer Harbour was assisted by 25176 between Warrington & Wigan N.W. due to the power being off because of overhead line damage.

November 21st (or 22nd) found 25176 rescuing a late night Birmingham - Euston electric multiple unit after it failed at Denbigh Hall Junction, 25176 was on hand to drag the failure to Bletchley, this was 25176's last passenger working.

1987
On January 8th 25176 came to assistance of ex-works 47119 which had failed on its test train from Crewe, being noted at Rhyl. On January 9th 25176 was again on local Chester jobs, though by the snowy 13th had migrated to Warrington and was also seen on this date with a short railtrain at Manchester Victoria. By breakfast on 17th 25176 was at Crewe Depot requiring attention to a traction motor armature, expected release was the evening of January 19th. On 24th 25176 was still in the Crewe area, allocated to the 3K02 05.00 Crewe - Liverpool, returning to Crewe for more local work on 25th.

A short time was spent at Newton Heath depot on January 31st before moving to Manchester Victoria.

25176 and a brakevan were noted at Crewe station on February 8th.

February 10 - 12th were spent in the Crewe - Shrewsbury area before reaching Machynlleth on the morning of the 14th. Bescot was reached on the evening of the 17th on the 7G25, returning to Crewe light engine late on 18th. By the early morning hours of February 21st 25176 was at Holbeck, allocated to work an empty stock special to Longsight Carriage Sidings (5Z97). After reaching Manchester Victoria it was off light engine to Edge Hill to bring some stock back to Manchester Victoria. Again the 1P55 to Barrow and return empties to Red Bank was handled on the morning of 24th. Later that day it was back at Manchester Victoria on the 1H07.

On February 26th 25176 worked the 1H07 19.34 Bolton - Mayfield vans. 25176 was noted at Manchester Victoria on February 27th. 25176 was noted at Longsight on February 28th & March 2nd, on the latter allocated to the 0K36 light engine to Guide Bridge to collect the 6K36 to Nuneaton Hartshill. By the early morning of 5th it had arrived at Liverpool Lime Street on the 1F54, being then allocated to the 8X31 to Bury. On the morning of 10th the locomotive returned to Longsight for attention to the valve and rocker gear. Although repairs were expected to be completed by the end of the day, they did not occur, with 25176 now consigned for scrap after a service life of twenty two years. 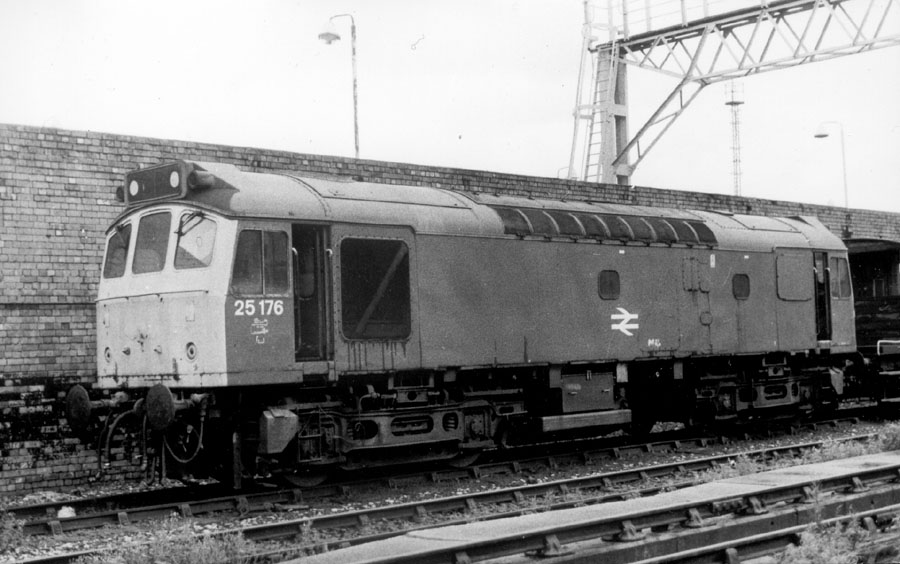 Distinguishing Features
No.1 cab front: valencing: rusty patches in several places especially above the m.u. sockets and lengthy gash above dual brake connection: November 1981 (some) - May 1986 (presumably until withdrawn?).
No.1 cab front: 2nd man's side: rusty patch to left of electrification flash and on corner at same height as bottom of window: May 1984 - May 1986 (presumably until withdrawn?).
No.2 cab front: rust patch below handrail towards center of cabfront: (not August 1985) April 1986 - until withdrawn.
No.2 cab side: 2nd man's side: missing paint above valencing on 2nd man's cabside panel: June 1985.
No.2 cab headcode panel: missing from at least September 1981 to August 1982.
(With thanks to Neil Cannon for making available the TOPS reports for 1987).