Locomotive was noted as vibrating
OVR operating at different levels.

1977
On January 26th the 02.30 Stratford - Trafford Park freightliner became derailed at the north end of Tring cutting. The train led by 87018 blocked all lines, damaging the overhead line equipment and much track. It was several days before the lines were repaired, on January 28th 25180 was noted with a permanent way train at the scene of the derailment. 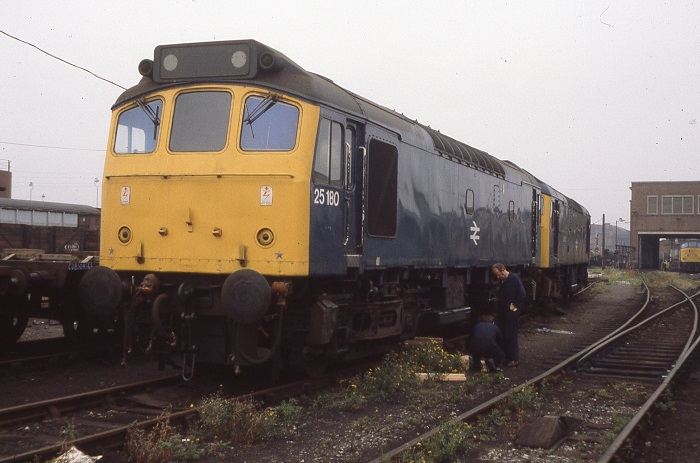 The continuing shortage of electric locomotives led to the novel use of pairs of Cricklewood’s Class 25s on the heavy Kensington Olympia – Stirling Motorail service. 25180 & 25190 handled the down working on June 2nd, they worked as far as Crewe, returning south with June 3rd's balancing working, the 23.40 ex Stirling.

On November 11th a Liverpool - York railtour with 46229 required the banking assistance of 25180 to Miles Platting.

On the afternoon of May 19th 25180 was noted at Springs Branch on an up freight.

25180 was noted southbound over the Settle & Carlisle with a short engineers train on June 30th.

On the evening of July 22nd 25180 was noted at Birmingham New Street with an exhibition train.

On September 20th 25180 was noted in the parcels platforms at Euston.

On September 25th the 21.25 Inverness - Kensington Olympia was worked forward from Willesden by 25180.

1982
On the morning of April 27th 25180 was westbound at Chinley with loaded ICI bogie hoppers for Northwich.

Another gas pipe project in November brought pairs of Class 25s from Leith South to St Helens or Warrington, the trains of twenty six bolsters required banking between Garswood & Shaw Street. Noted on November 3rd were 25176 & 25078 banked by 25109 whilst the next day produced 25059 & 25180 banked by 40090. On November 11th 25180 was noted southbound at Shrewsbury with an eleven wagon freight. On November 15th 25180 was noted eastbound at New Mills South Junction with ICI empties from Northwich to Tunstead.