Recordings below on leaving Loughborough.

At about 5pm on February 6th 7541 was noted at Liverpool Lime Street on a down van train.

At about 6pm on March 27th 7541 was noted at Manchester Victoria with down empty coaching stock.

No recordings were made due to the main generator suffering a flashover at 26mph.

On the afternoon of March 21st 25191 was southbound at York with a freight.

25191 was eastbound at Beeston (Notts) with mineral empties during the afternoon of November 26th.

25191 was noted at Willesden on November 27th, a long way from its Kingmoor home. 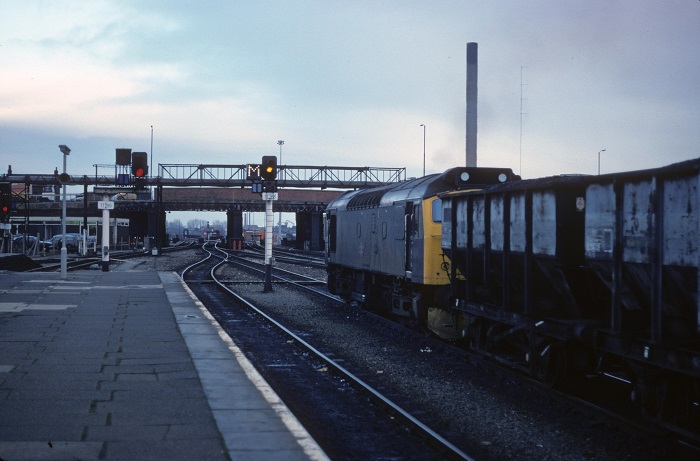 1980
The continuing shortage of locomotives, partly caused by a backlog of repairs at the main workshops, led to Swindon Works receiving unclassified repairs for locomotive types it had not dealt with before. On March 9th collision damaged 31124 & 31154 were moved from Doncaster to Swindon. Likewise 25191 and 25236 were also received for repairs. During March approximately six hundred locomotives were awaiting attention of which only one third (about 160) were out of traffic for scheduled repair. For the Class 25’s fifty eight were laid up, the Class 31’s had thirty out of traffic, whilst for the Class 47’s one out of every five machines was awaiting some sort of attention. Eight Class 25’s had been out of traffic for at least three months (25035/42, 25113/147/177/191, 25234/252), obviously the aforementioned move of 25191 to Swindon was a start in repairing these bad ordered machines. To provide Swindon with a source of spares 25111/147/252 were withdrawn during March and consigned there (25111 was the first to arrive on May 6th), not surprisingly two of these machines were in the batch long overdue for repairs. 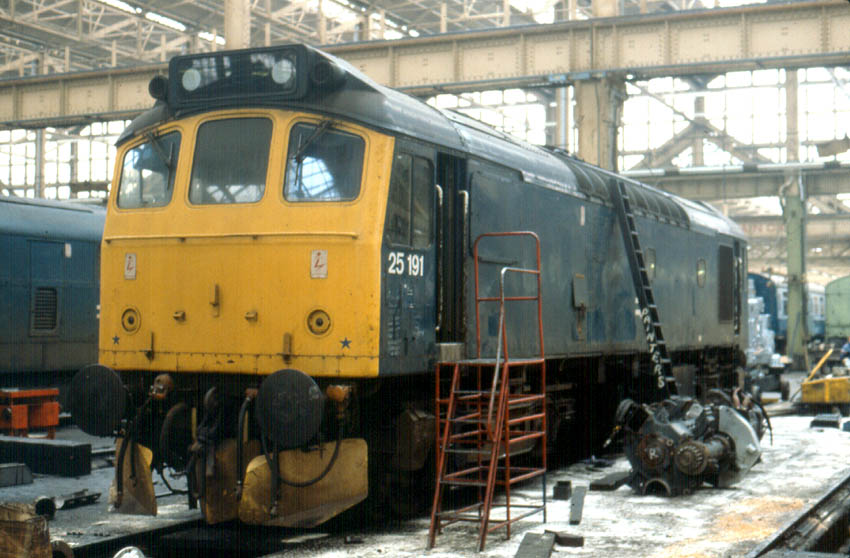 25191 was noted passing Hasland on October 2nd with a lengthy train of coal wagons.

25191 received an E exam at Kingmoor during December.

On February 12th 25190 & 25191 were noted at Shap with the Heysham - Leith pipe empties. 25191 was noted at Gloucester on February 27th assisting the 09.10 Worcester -Swindon diesel multiple unit forward from Gloucester.

On October 3rd 25191 was noted at Watford Junction with an electrification train.

25191 was stabled at Cricklewood depot on December 29th.

1983
On the afternoon of July 6th a diesel multiple unit from Chester failed at Northwich, 25278 came off Northwich depot but couldn't couple up to the unit, so 25191 came off the depot and took the train forward.

On August 21st 25191 & 25173 dragged one WCML service between Bletchley & Rugby due to the power being off for engineering work.

An unusual arrival at Follingsby on December 6th was 25191 on a freightliner working from Trafford Park. Two days later (8th) it assisted a failed 47459 between Leamington Spa & Banbury, here both were replaced by 25185 taking the ex-Wolverhampton service all the way to Paddington! On December 14th 25191 was noted heading west through Port Talbot.

1984
On January 6th 25191 was noted at Helsby with a loaded ballast train signalled for the Hooton line. 25191 was stabled at Bletchley on January 14th.

25191 was stabled at Tinsley on March 3rd. 25191 was noted at Stonebridge Park on March 23rd. The end of March saw much continued activity of Class 25s in the North East including 25191 & 25205 on the Stranraer Speedlink and Carlisle cement workings on 30th. 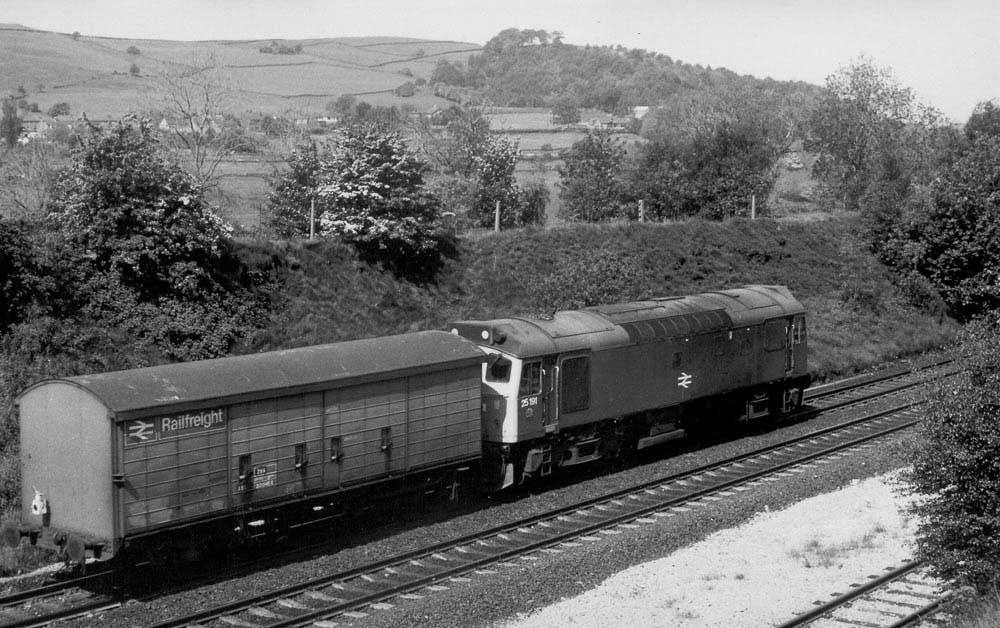 Photograph collection of webmaster.
With a solitary Railfreight wagon behind the drawbar, 25191 is not taxed at all as it heads west approaching New Mills South Junction on June 7th 1984.

On June 1st 25191 was noted at Chester with a parcels train and also northbound at York on a ballast train (ten loaded wagons and four brake vans). The aging diesel multiple units on the Crewe - Lincoln service, already way beyond their best provided a number of diesel locomotives with additional passenger mileage, either dragging them or substituting with rakes of coaching stock. Typical of this was 25191 working the 14.20 Crewe - Cleethorpes, from Stoke on Trent (?) as far as Derby on June 19th, for the remainder of the year diesel substitutions would continue, using Classes 20/25/31/47. On June 20th 25191 was noted passing through Settle with a loaded ballast train. On June 30th 25191 & 25189 were noted at Watford Junction.

On July 2nd 25189 & 25191 were shunting parcels stock at Northampton. On July 4th 25191 was at Northampton with a parcels working. A Northampton - Blackpool excursion on July 11th featured 25191 roundtrip between Preston & Blackpool, it was used later that day on a returning Edinburgh - Manchester Victoria forward from Preston. The following day (12th) it was back in action on the Blackpool North - Preston leg of a returning excursion to Birmingham. A week later (19th) it was more local action, firstly between Preston & Barrow on an ex-Crewe service returning south throughout with the 18.21 Barrow - Liverpool. On July 25th 25191 was noted at Blackburn Fogerty's yard with five bulk tankers and a brakevan. On July 29th 25196/25201/25231/25283 were at Willesden depot whilst 25058, 25191, 25285 + 25249 were nearby on permanent way trains.

On December 9th 25191 & 25258 were noted arriving at Rugby with a crane, possibly for the permanent way work taking place that day.

On December 18th travellers on the 07.28 Hereford - Birmingham New Street diesel multiple unit had the delights of 25191 forward from Stourbridge Junction after the unit failed.

1985
On January 21st the diesel multiple unit working the 15.00 Whitehaven - Carlisle failed requiring assistance throughout from 25191. On January 31st 25191 was noted passing Point of Ayr sidings with an engineers train of turbot wagons.

On February 6th 25226 & 25191 were noted southbound at Hereford with what is believed to be the 6V32 Ellesmere Port - Severn Tunnel Junction bitumen tanks. 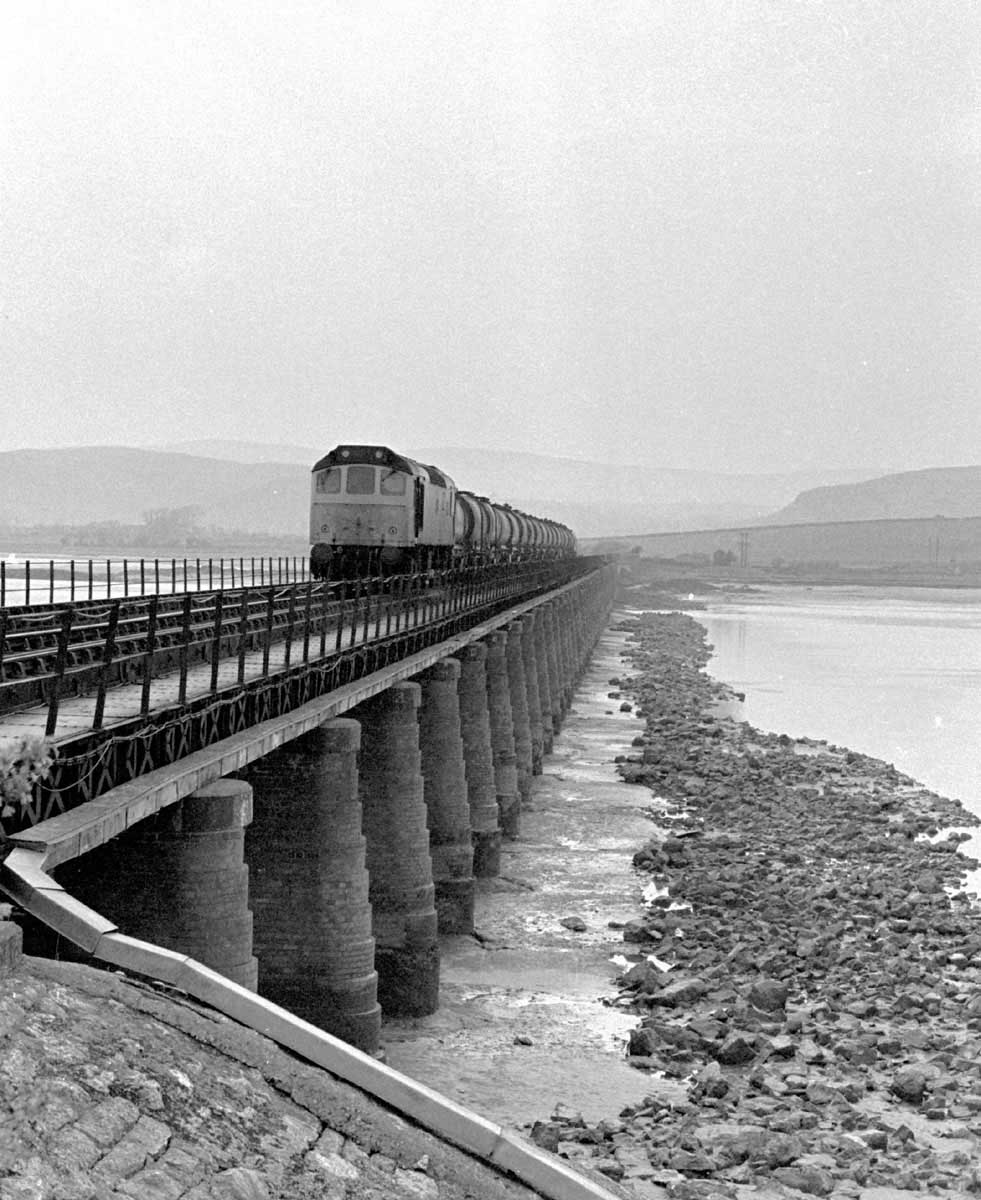 Photograph courtesy John Broughton.
A moody shot of 25191 as it crosses one of the many estuaries on the line from Carnforth to Barrow in Furness, seen here at Plumpton, May 17th 1985.

On June 20th 25191 was noted eastbound at Newport (?) with empty HEAs. On June 22nd 25191 & 25230 worked the 13.40 Aberystwyth - Shrewsbury forward from Shrewsbury to Wolverhampton when the train was extended due to late running. Two days later (June 24th) tragedy befell 25191 working the Shrewsbury - Bristol vans after striking and killing a lady at Leominster. The police investigation delayed the following services, with 25191 held later at Hereford. 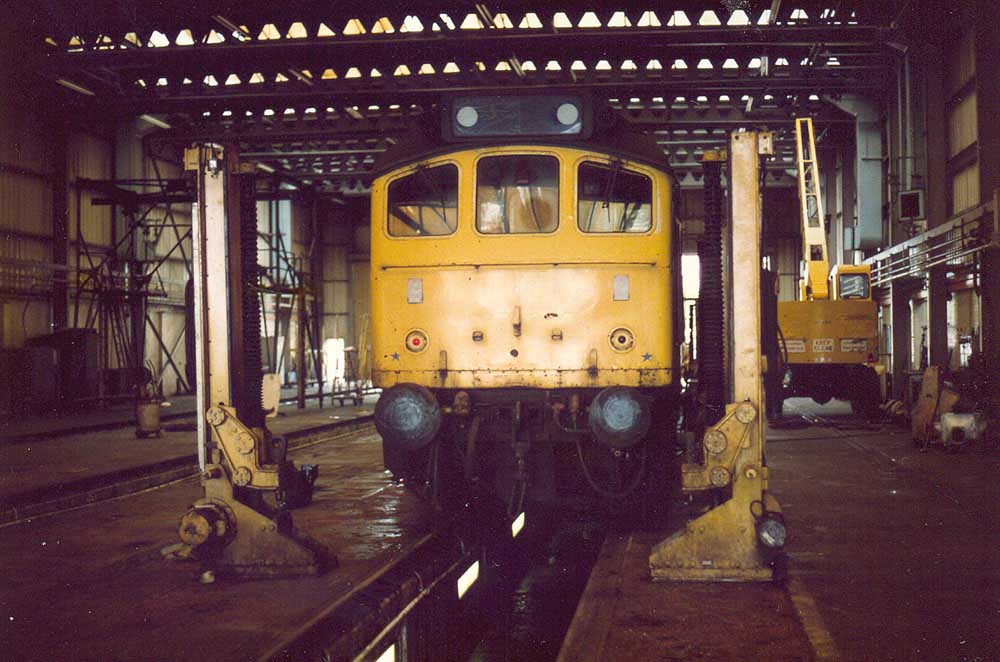 Photograph courtesy Stephen Houlker.
An almost empty Wigan Springs Branch shed appears to only have 25191 in for attention on June 29th 1985. 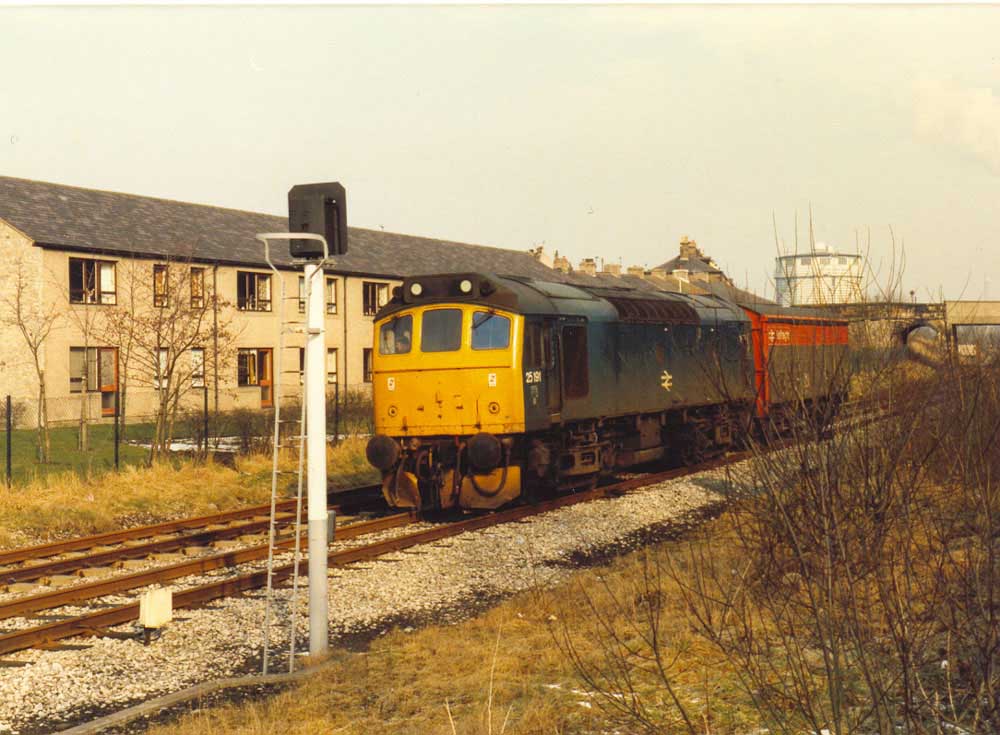 During May 25191 moved to Crewe - its last transfer. On May 1st 25191 was noted at March with a lengthy train of merry-go-round wagons. On May 2nd 25191 worked the 3V20 Manchester - Bristol parcels train, being still noted at Bath Road on May 3rd. An unusual working for 25191 during the afternoon of May 12th was to haul a broad gauge replica of 'Iron Duke' from Tyseley to Didcot with three bogie flats and a brakevan.

25191 was noted working the a Northampton - Bescot SLK trip on July 1st. 25191 was noted at Bristol Bath Road on July 4th, at Severn Tunnel Junction on July 5th, at Machynlleth on July 18th before working the Aberystwyth - Stanlow oil tanks, at Shrewsbury on July 21st and noted passing Crewe station light engine on July 22nd.

More adventurous was the F & W 'Coastway Crusader' excursion (1Z36) on July 27th, from Wolverhampton to Bognor Regis/Littlehampton, via Bristol and Westbury. The trip started behind 50050, 45128 taking over at Birmingham for the run to Bristol. Here 25181/191 took over reaching Ludgershall, via Andover where 25181 failed with oil pressure problems. The machine was partially revived but unfortunately ran back down the branch with its handbrake on. At Andover and now with bad wheel flats the unfortunate Class 25 was detached and replaced with 33011 for the run via East Putney, Tulse Hill, Wimbledon and Epsom to Littlehampton. On the return trip it had been intended to replace the Class 25/33 combination with 37046/117 at Westbury, however in an unusual move 25191 remained on the train, tucked in behind the 37's, running in this fashion back to Bristol where 45128 was waiting for the run home. With 25181 having bad wheel flats it was hauled to Eastleigh using a wheel skate on August 5. This was its last trip however as it was condemned here and would be broken up by Vic Berry on site during July 1988. 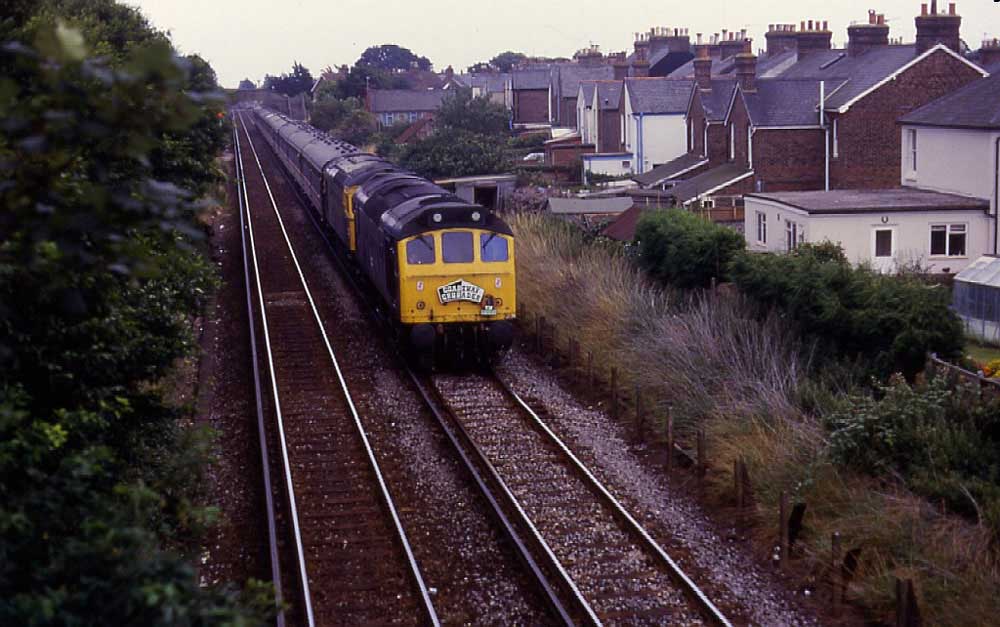 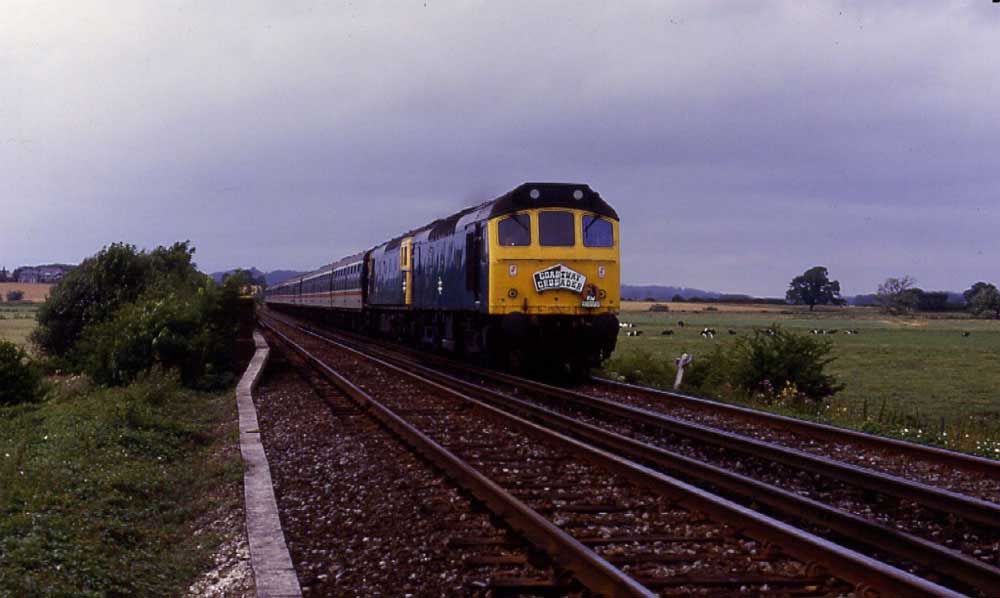 Photograph courtesy Paul Garvey.
Two views of the 'Coastway Crusader' at Chichester (top) & Amberley (bottom). By this time 33011 had replaced the unfortunate 25181, looks like the day was somewhat overcast.

On the evening of July 28th 25034 & 25191 were noted at Bristol Temple Meads with a northbound parcels train (for Derby or Newcastle?)

The 06.30 Wolverhampton - Shrewsbury local service was hauled by 25191 on August 12th. On August 15th 25191 worked the 5H75 Peterborough - Cambridge formed of one coach, then worked the 6E07 Foxton Exchange Sidings - Toton/Shirebrook merry-go-round coal empties from the Rugby cement works at Barrington.

1987
25191 was noted at Crewe Depot over the New Year attached to 25059. It was noted stopped at Crewe on January 7th with flat batteries, these were fixed in time for its January 10th visit to Machynlleth attached to 25109, no doubt for permanent way work. By 17th it was back in the Crewe area. On January 21st 25191 was noted through Hereford with a van train for South Wales. 25191 was at Carnforth on 24th & Skipton the next day. towards the end of the month it was at Toton for an 'A' exam with attention to its brake blocks and a low power problem.

The beginning of February found it back in the Crewe area, noted eastbound at Chester on 7th with loaded ballast wagons, by the 11th it was at Manchester Victoria, then to Guide Bridge to work the 6K37 to Nuneaton Hartshill. For the remainder of February 25191 seems to have been active mostly in the Crewe area. On 27th 25057 & 25191 were in charge of a Ravenhead Jct – Oakamole sand empties.

March began with 25191 in the Stoke area, by the end of the first week it had made a trip to Buxton, possibly assisting a diesel multiple unit on 7th. At lunchtime on March 12th 25191 was at Manchester Victoria. On March 13th 25191 was noted at Buxton. 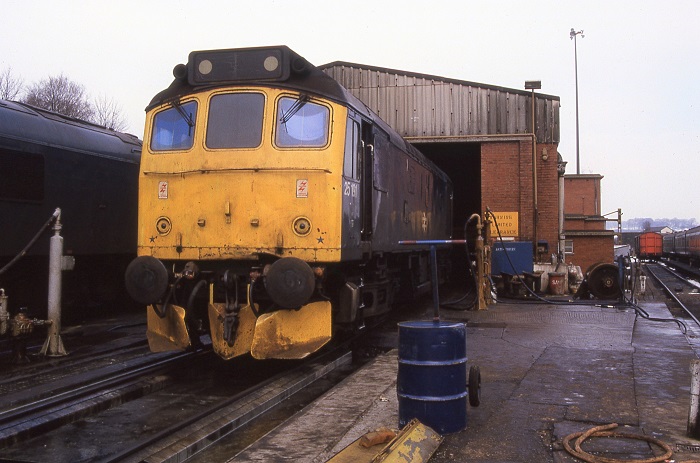 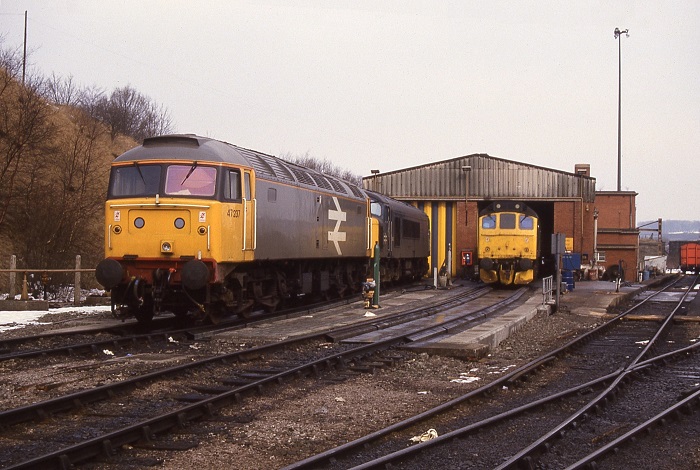 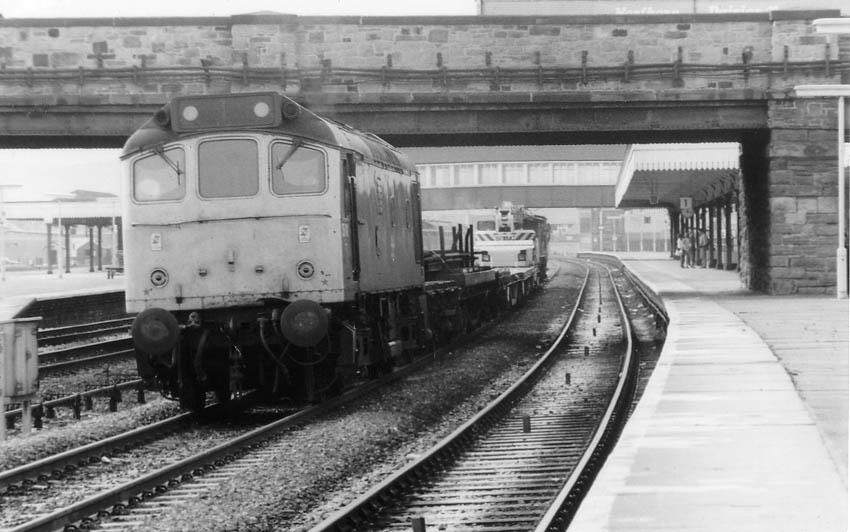 Photograph courtesy Dave Williams.
For so long a mainstay on the North Wales passenger & freights here is 25191 at Rhyl on what is possibly its last working during March 1987.

25191 would escape the scrappers torch and be sold to the North Yorkshire Moors Railway during August 1987.