1974
On March 16th a Manchester Piccadilly - Weston-super-Mare roundtrip charter was worked by 25237 & 25058 to Bescot where Class 45 No.101 took over. The train had departed an hour late due to coupling issues between the two Class 25s.

At about 6pm on April 30th 25237 was noted passing Park (Manchester) Victoria with a down freight.

During November 25237 was transferred to Haymarket for an eight year allocation to Scottish depots.

1976
On April 19th the 21.00 Edinburgh - Glasgow Queen Street was worked by 25237, arriving twenty minutes late. The return working, the 22.00 to Edinburgh was only thirteen minutes late leaving, in charge of 24106. On April 27th 25237 was back in the news after catching fire whilst hauling an engineer’s saloon through Cumbernauld.

1977
The line between Bridge of Orchy and Rannoch was closed on March 16th when a special freight from Crianlarich to Fort William hauled by 27031 suffered the derailment of eight wagons of coke. The line remained closed until March 18th with the consequent stock dislocations. This included no catering facilities on the long distance trains, including the 18th's 16.00 Mallaig - Glasgow Queen Street hauled by 25237. However at Corrour 25237 was used to transfer a dining car from a late afternoon northbound service to the ex-Mallaig service.

On November 30th the 17.40 Glasgow Queen Street - Aberdeen failed at Eastfield behind 47470, 25237 was brought off the depot to take the train forward. 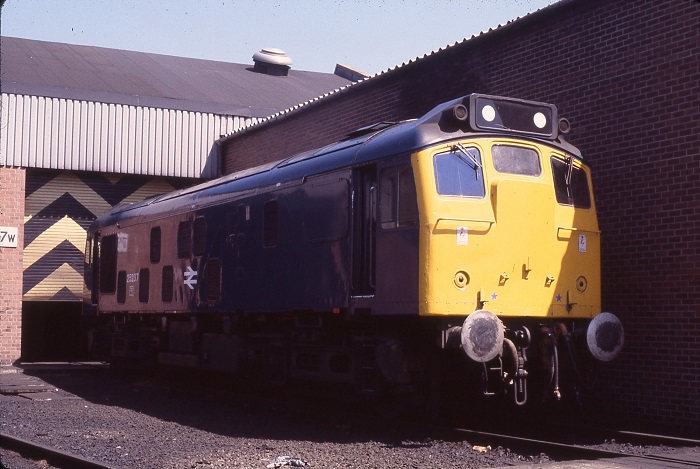 On August 27th 25237 was westbound at Gloucester with steel for South Wales. On August 28th 25237 was stabled at Severn Tunnel Junction.

On April 15th 25237 was noted westbound(?) at Chester Dee Junction with a freightliner train. On April 30th a Euston - Aberystwyth charter was worked by 25237 & 25243 roundtrip between Wolverhampton & Aberystwyth.

25237 was stabled at Severn Tunnel Junction on June 5th. 25237 was noted eastbound with a parcels train through Manchester Victoria on June 13th.

On the afternoon of October 7th 25237 & 25239 were northbound at Warrington Bank Quay with a sixteen wagons loaded with rock salt from Over & Wharton to Mossend.

25237 was stabled at Bescot on December 1st. On the wet evening of December 13th 25237 was noted light engine at Derby station.

On November 20th 25237 was light engine at Sheffield Midland.

1985
Part of the return leg of the two day marathon 'The Cornishman' railtour from Plymouth to St Pancras on January 26th 1985 was worked between Leicester & St. Pancras by 25237 & 25034 on what was a very cold winter's night. This railtour had started the previous evening at London St.Pancras travelling to Cornwall by way of Leicester & Birmingham. It is remembered by many as one of the coldest overnights ever, where ice formed on the inside of the windows. At the start of the railtour 25192 failed at Bedford where 31154 was summoned to assist 25034 to reach Leicester. Departure from Leicester at 22.02 should have been behind a Class 40 but instead two Class 20s (20006 & 20133) were provided, with outside temperatures below zero. Tour organisers requested that the train windows should remain closed and movement through vestibule doors kept to a minimum to preserve any vestiges of warmth. The advertised Class 40 was waiting at Birmingham New Street in the shape of 40012 which could not heat the train. At Bristol 37088 & 37189 took over, with at least one of the Class 37s being able to provide train heat. (Details from Adrian Nicholls Flickr page).

The final recorded passenger working for 25237 took place on April 5th 1985 assisting the 05.42 Hull - Manchester Piccadilly forward from Chinley after the Class 31 failed, which is perhaps ironic as it was over the Hope Valley route that many brand new Class 25s worked the Derby - Manchester locals.

25237 was southbound at Springs Branch on May 1st with a train mostly comprised of empty bogie bolsters. 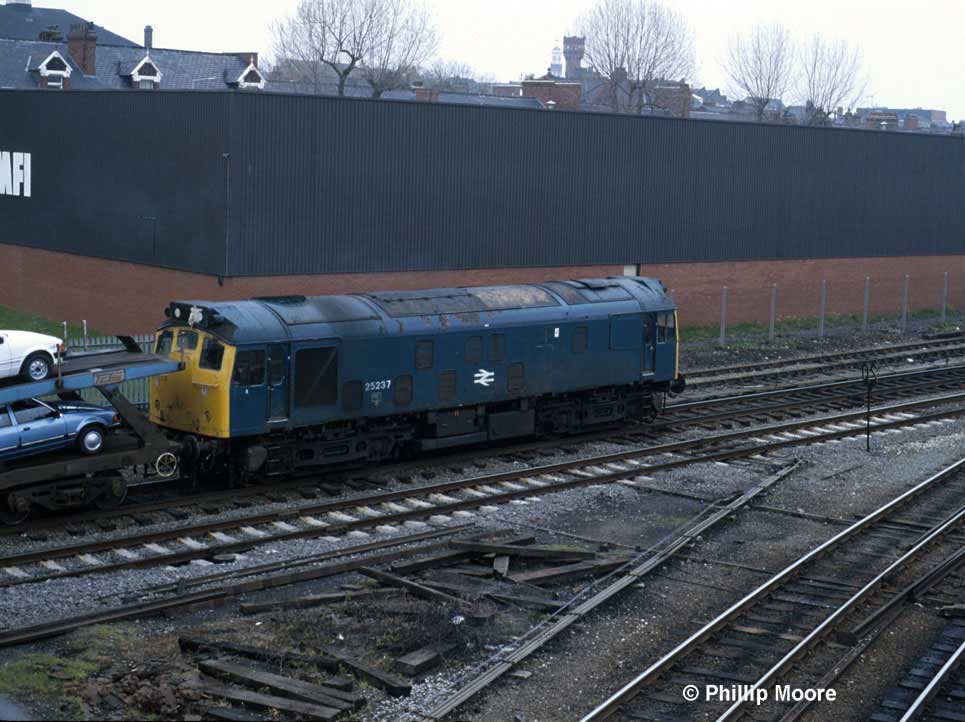 On May 25th 25237 was southbound at Crewe with tube/pipe wagons.

On June 2nd 25237 was stabled at Buxton station. Two days later (4th) 25237 was in charge of a Manchester – Bristol parcels working, on reaching Hereford the relieving driver refused to accept the Class 25, 47152 was borrowed off the southbound bitumen tanks to go forward. Whatever ailed 25237 proved fatal as it was withdrawn later in June. 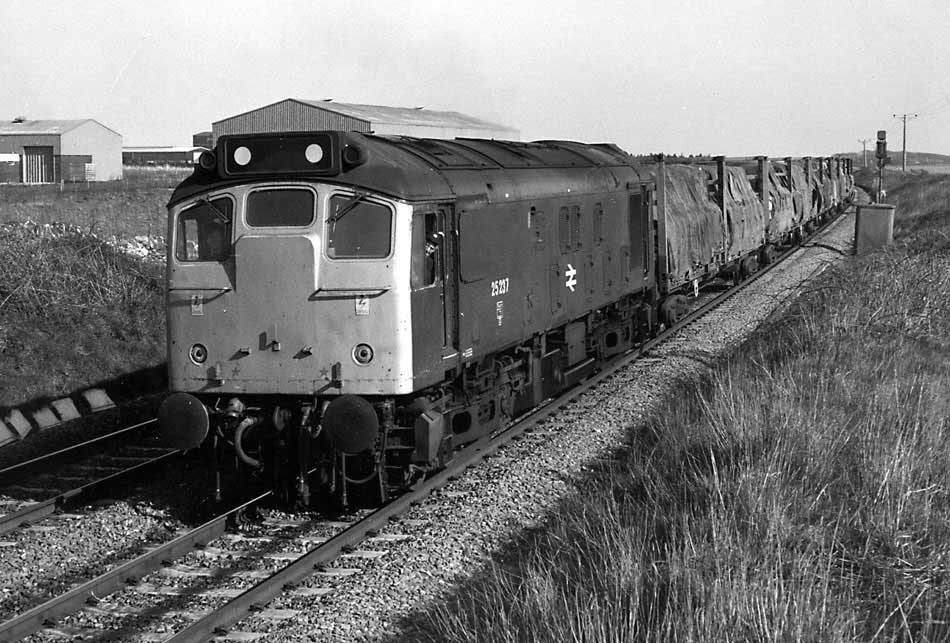 The number panels from scrapped 25237 were saved - including TOPS panel and ED shed sticker.