On September 24th 25257 & 25230 worked the return leg of a day excursion returning from Keighley to Wellingborough via the Leeds avoiding line and the Old Road.

The first week of September proved to be quite busy for 25257 & 25248. On September 2nd they worked the 09.19 Manchester Piccadilly - Yarmouth to Lincoln Central returning from there with 09.15 ex-Yarmouth. The next three days saw roundtrips to Skegness, from Derby on 3rd & 5th and Burton on Trent on 4th.

The 04.10 Shrewsbury - Aberystwyth and the 10.07 Aberystwyth - Euston to Wolverhampton were worked by 25257 & 25178 on September 6th. During the early afternoon of September 8th 25257 was noted southbound at Brookmans Park hauling the prototype railbus LEV1 (headed for Stratford?).

1982
25257 was noted southbound at Doncaster station with a freight headed towards Rotherham on the late afternoon of January 6th.

25257 was noted southbound at Crewe station with mineral hoppers on September 2nd. The failure of the diesel multiple unit working the 16.20 Crewe Derby on September 28th saw 25257 assist throughout.

On August 5th 25257 worked the 17.03 Euston - Blackpool North forward from Preston. Towards the end of August, on the 27th the 13.22 Newcastle - Liverpool failed behind 47519 at ?? with 25257 dragging the service to Liverpool. 25257 then worked the 18.45 Liverpool - Manchester Victoria. It was also noted shunting parcels vans at Manchester Victoria on this day.

25257 was noted at Llandudno Junction on December 29th.

1984
After about a month in a withdrawn state 25257 was reinstated to Crewe on January 24th. During the late evening of January 25th both 25249 & 25257 failed near Roade working a Stanlow - Salfords oil train. Bletchley provided two more Class 25s and a fitter to resolve the problem, with the train finally getting past Bletchley in the early hours of 26th.

25257 was withdrawn for a second time on February 2nd and stored at Bletchley, it was moved to Toton with 08019 on March 21st but was later reinstated to Crewe on July 9th. It quickly handled several passenger workings, on July 15th a Weston-super-Mare - Grange Over Sands day excursion was handed over to 25257 & 25322 from Birmingham New Street to Grange over Sands, returning with the train as far as Crewe. On July 28th the 08.40 Edinburgh - Blackpool North was worked forward from Preston, returning to Preston with the 14.28 Blackpool North - Edinburgh. It then worked forward from Preston with the 16.20 Glasgow Central - Liverpool. The 07.43 Liverpool - Preston was worked by 25257 on August 11th, this being the portion for the 07.50 Manchester - Glasgow.

25257 was stabled at Carlisle depot on a wet September 3rd. 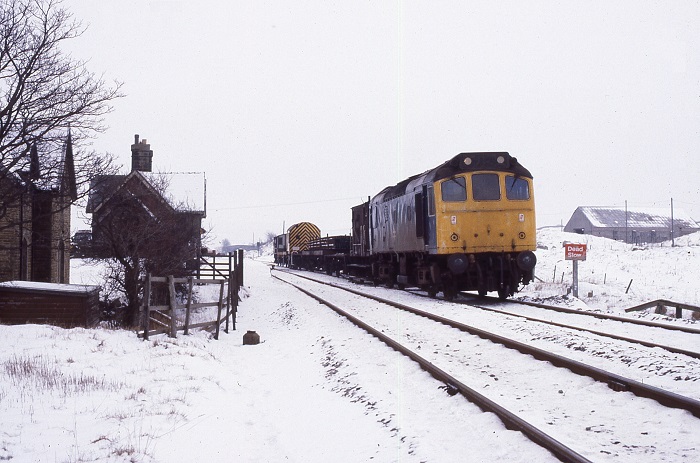 Photograph collection of webmaster
Its January 20th 1985 with snowy conditions at Ribblehead as 25257 heads north with a short engineers train.

On January 20th the 17.20 Glasgow Central - Bristol Temple Meads was assisted between Lancaster & Preston by 25257 due to the power being off for engineering work. Two months later on March 21st a diesel multiple unit failure saw the 15.32 Cheltenham Spa - Swindon assisted to Gloucester by 25257. 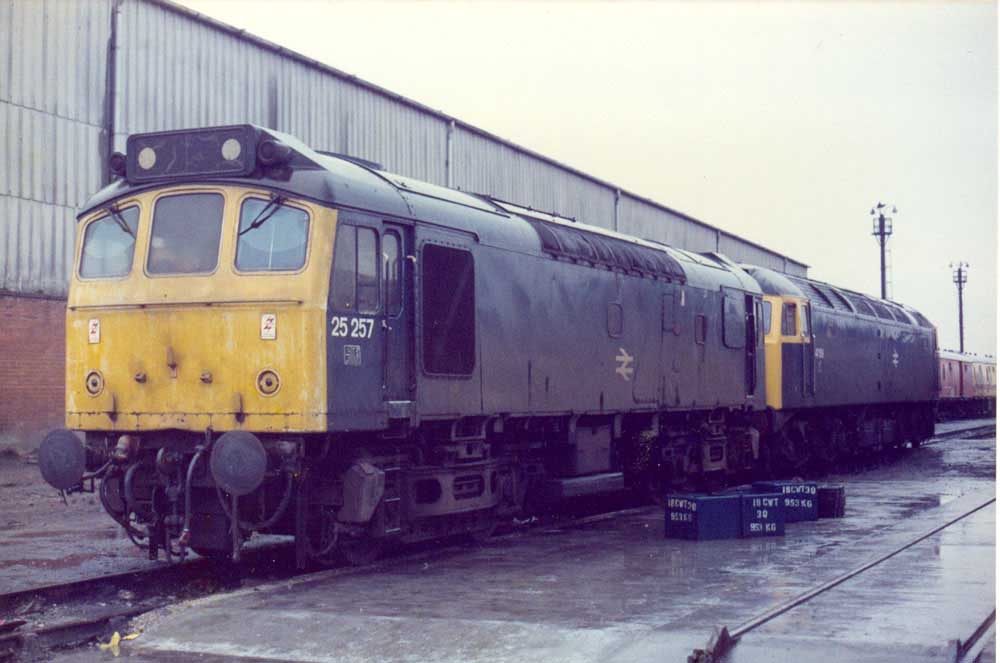 25257 was stored unserviceable during October and finally withdrawn on December 3rd. 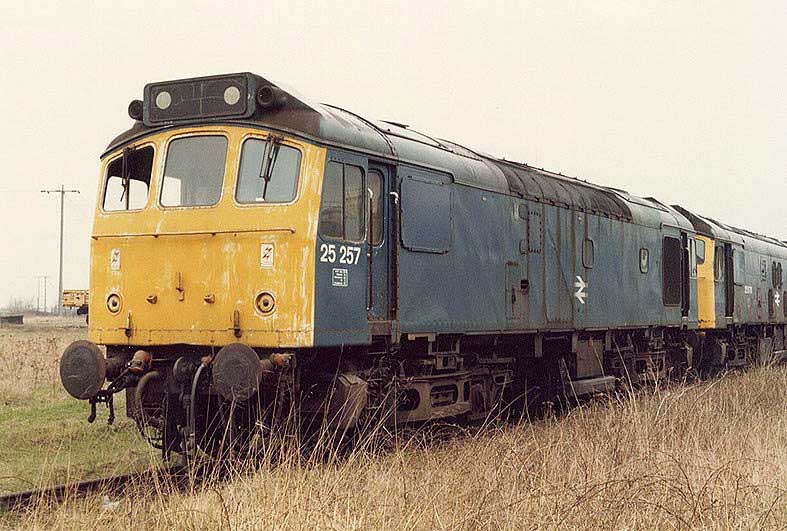 Photograph courtesy Paul Bettany
The end of the line for 25257 at Doncaster Works, April 27th 1986. Surprisingly it would not be cut up here, after further storage at Goole it would be forwarded to Vic Berry's, Leicester for scrapping.