On June 25th 25287 and another Class 25 worked the 6M32 Hull - Rylestone Tilcon stone empties, being noted at Skipton.

Springs Branch’s 25287 was withdrawn during July with minor collision damage, repair costs being estimated at Ł20,000. Its retirement was brief, being re-instated in September. The damage was isolated to the non-battery isolating switch bodyside and the No.2 cab. Just below the cantrail from the No.2 cab almost to the radiator screen was a long scrape, breaking both bodyside windows, seriously damaging the boiler room screen and the cab bulkhead on the 2nd man's side. Additional damage was caused to the 2nd man's side of the cab. It's reinstatement after outshopping from Derby may have resulted from the decision to withdraw accident damaged 25030 & 25174 after they were hit by runaway wagons at Aylesbury on August 5th. 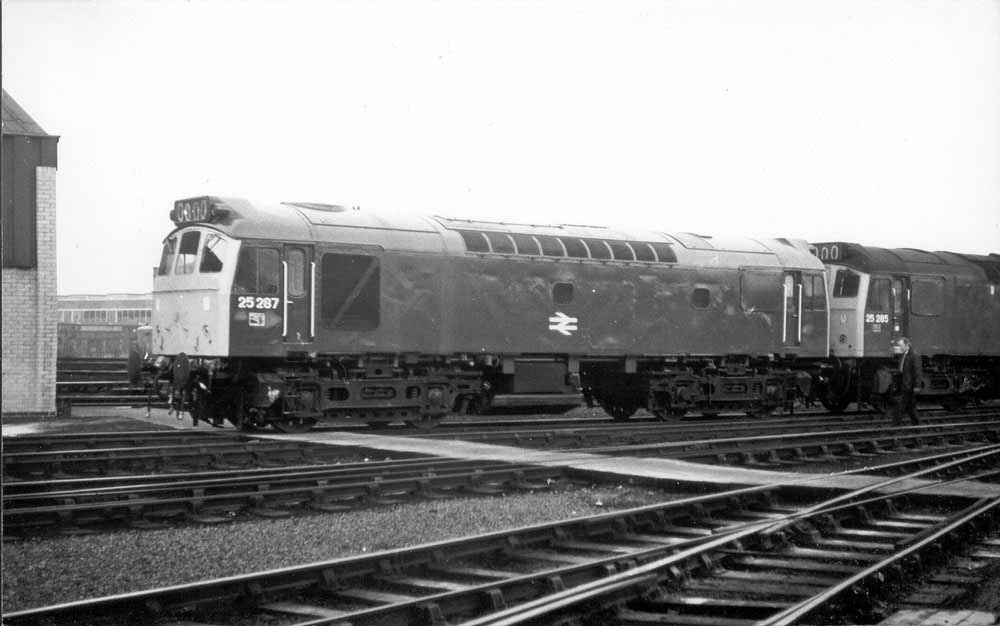 Photograph collection of webmaster.
A clean looking 25287 date & location unknown, but presumably about November/December 1976 shortly after a major repair at Derby Works.

25287 was noted passing Hexham on December 6th with the cement train from Clitheroe.

On a snowy December 10th 25287 was northbound at Dent with a mixed freight.

1978
The late evening of January 14th saw a southbound freight led by 81012 bring down the wires at Bamfurlong. Several services were impacted, including a Southampton - Coatbridge freightliner with 87030, 25287 was added at Warrington, travelling via Earlestown, St Helens Junction and Shaw Street, rejoining the mainline at Springs Branch, the Class 25 coming off at Preston.

On the afternoon of August 7th 25287 was stabled at York.

On April 13th 25287 was eastbound at Nottingham with oil tankers.

On the WCML on September 20th 25287 assisted 86217 from Lancaster to Carlisle after the latter had two traction motors isolated whilst working the 15.00 from Euston. Only seven minutes were lost after the addition of 25287.

On July 25th 25287 was noted on weed killing duties at Ribbleton on the Preston - Longridge line.

The failure of the Class 47 at Manchester Victoria on September 9th whilst working the 18.05 Liverpool - Leeds saw 25287 take the service on to Leeds.

25287 was noted at Ainsdale with a permanent way train on 15th March.

On May 27th 25287 was northbound at Chesterfield with empty steel bolsters.

On the afternoon of May 28th 25287 was noted eastbound at Guide Bridge on a class 8 freight.

During the evening of June 16th 25287 arrived at Warrington Arpley with a freight.

An 'E' examination was completed during November at Crewe depot.

25287 was stabled at Severn Tunnel Junction on March 14th.

On June 18th 25287 hauled 304 007 from Allerton to Wolverton Works for attention, two days earlier the unit had failed on a late evening Crewe - Liverpool service.

A day excursion from Birmingham New Street to Blackpool North on August 14th was worked roundtrip between Preston & Blackpool North by 25287. On September 6th the 16.30 St. Pancras - Nottingham failed at Bedford, 25287 took the train on to Nottingham.

1983
On January 22nd 25287 was stabled at Birkenhead and was also noted this day with 25152 on ICI empty limestone hoppers returned to Tunstead. 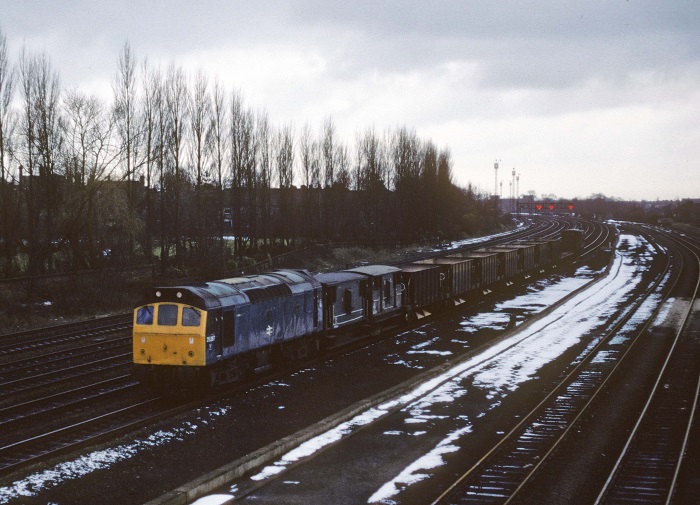 25287 was on station pilot duty at Manchester Victoria on 5th March.

On March 8th 25287 was eastbound at Manchester Victoria with a freight.

25287 worked a roundtrip Tunstead - Northwich train of ICI bogie hoppers on April 14th, the loaded working was made up of eighteen hoppers.

On October 27th 25287 was noted at Sheffield with parcels stock.

Although the display of locomotive headcodes had long since ceased 25287 retained a working set of headcodes above the No.2 cab, although '0000' was normally displayed, from time to time the headcodes were set to other combinations. The No.1 cab displayed the normal two dot 'domino'.

1984
On a frosty January 21st 25287 was westbound at Chinley with loaded ICI limestone hoppers.

On February 24th 25287 was westbound at Chester with spoil wagons.

25287 was noted parked in Rhyl yard with a short parcels train on March 3rd. The No.2 cab still had a working headcode panel.

25287 was stabled at Severn Tunnel Junction on April 16th. A week later on April 24th 25287 was noted in the loop at Panteg with 21 short-wheelbase tanks.

25287 was stored unserviceable during May and was withdrawn on December 3rd 1985.