A side crankcase door
Knecht fuel filter pipes various leaks
B Bicera no.5 leak
No.1 AWS only drops train pipe to 60
No.1 desk key won't fit without ??
No.2 cab driver's door holes to blank off (from builders plate?)
Fan switch leaks
No.5 cylinder head blow.

In South Wales the use of Class 25s for working regular freight diagrams was finished, Class 37s now taking up these diagrams out of Cardiff and Newport, though Class 25s would frequently deputise for a non available Class 37. A number of workings brought foreign Type 2s into the area, on November 23rd 25289(HA) arrived with the 22.58 6V88 Warrington - Margam ingot train.

On July 20th 25289 & 25224 were noted at Exeter with a return 1Z75 Barnstaple - Leamington Spa charter and presumably worked the outbound leg. 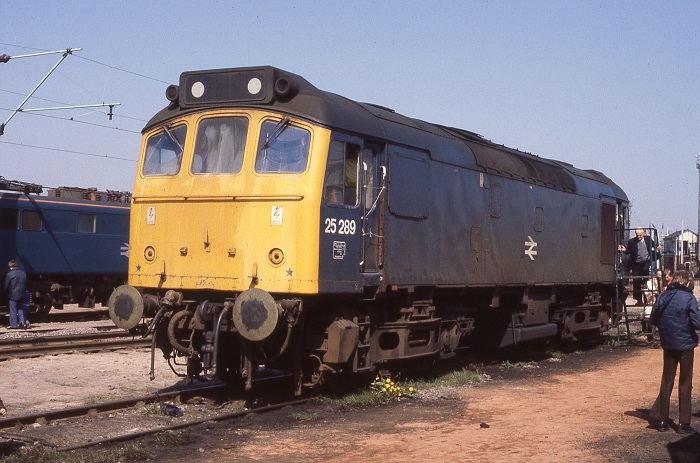 For 1980 the last weekend in July brought a couple of passenger workings. On July 25th 25289 & 25282 worked the return leg of a Scarborough - Leamington Spa day excursion. The next day the same pair made a round trip over Cambrian metals, working the 07.40 Euston - Aberystwyth forward from Wolverhampton and returning with the 17.55 Aberystwyth - Wolverhampton.

25289 was noted at Bletchley on an up freight on the morning of August 16th.

On July 27th 25289 was northbound at Bedford with empty Cartics.

25289 was stabled at Crewe Diesel depot on October 4th.

25289 was noted southbound at Carnforth on August 28th with bulk tankers.

On September 4th 25289 was eastbound at Llandudno Junction with loaded ballast hoppers. On September 8th 25289 & 25268 were northbound at Warrington Bank Quay with oil tankers. 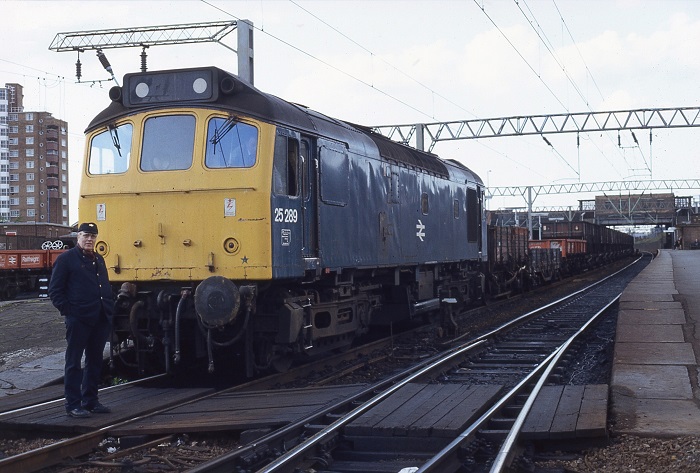 Distinguishing Features
No.1 cabfront: center lamp bracket only, no other fittings: November 1978.
No.2 cabfront: driver's side below electrification flash: lengthy horizontal line of rust: (not present May 1980), November 1982 - March 1983
Non BIS side: lengthy scrape just below cantrail at center of bodyside: sometime in 1982 until withdrawn.