On the early evening of May 30th 25297 & 25322 were noted at Crewe with a train of mineral wagons heading southbound off the Chester line.

25297 was on empty coaching stock duty at Liverpool Lime Street on August 12th.

1977
25297 was northbound through Crewe station with a loaded sand train on January 15th.

The closure of Liverpool Exchange station on April 29th was marked by a special service to Lime Street via Wigan Wallgate, comprising ten coaches and buffet hauled by 47441. Departure was at 23.45, the stock having arrived behind 25297.

1979
On February 24th 25279 was noted at Chinley with a Tunstead - Northwich loaded ICI limestone train.

On the evening of August 4th 25297 was noted at Liverpool Lime Street with a wiring train. 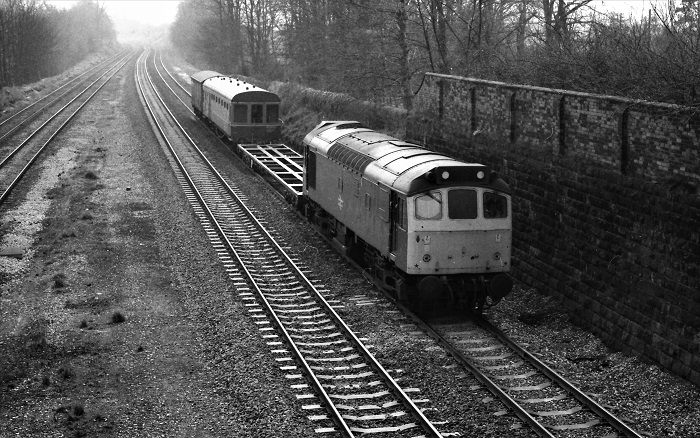 A short working for 25297 on August 23rd was the 08.45 Manchester Victoria - Glasgow Central as far as Preston. Also on this day it was noted at Castleton PAD with a train of rails.

On the late afternoon of March 3rd 25297 arrived at Warrington Yard with a freight.

During September 25297 received an 'E' examination at Springs Branch. 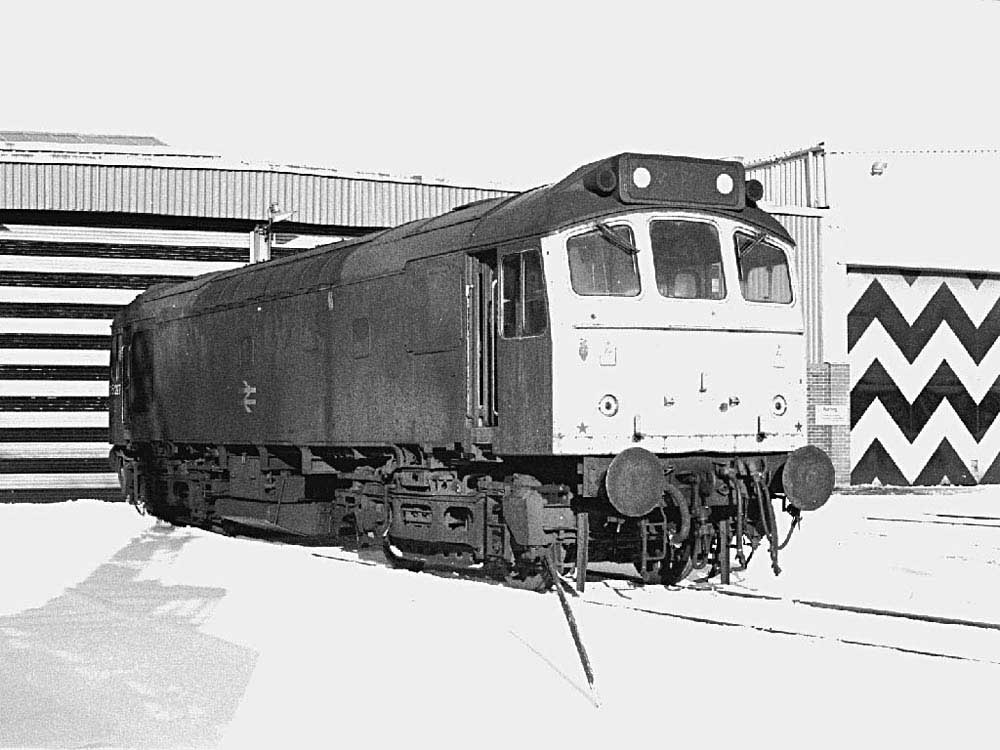 Possibly 25297's first passenger working over the Cambrian line occurred on July 9th with 25327 on the 07.44 Shrewsbury - Aberystwyth, which was turned around at Machynlleth due to late running, returning as the 10.45 Machynlleth - Euston as far as Wolverhampton. On July 16th 25297 was noted at St Helens Junction. 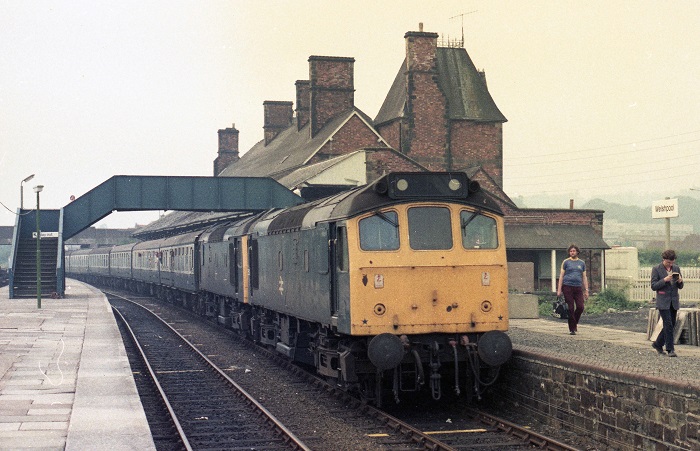 On September 7th 25297 was at Ribblehead quarry siding with loaded ballast wagons. 25297 was stabled at Skipton on September 10th. 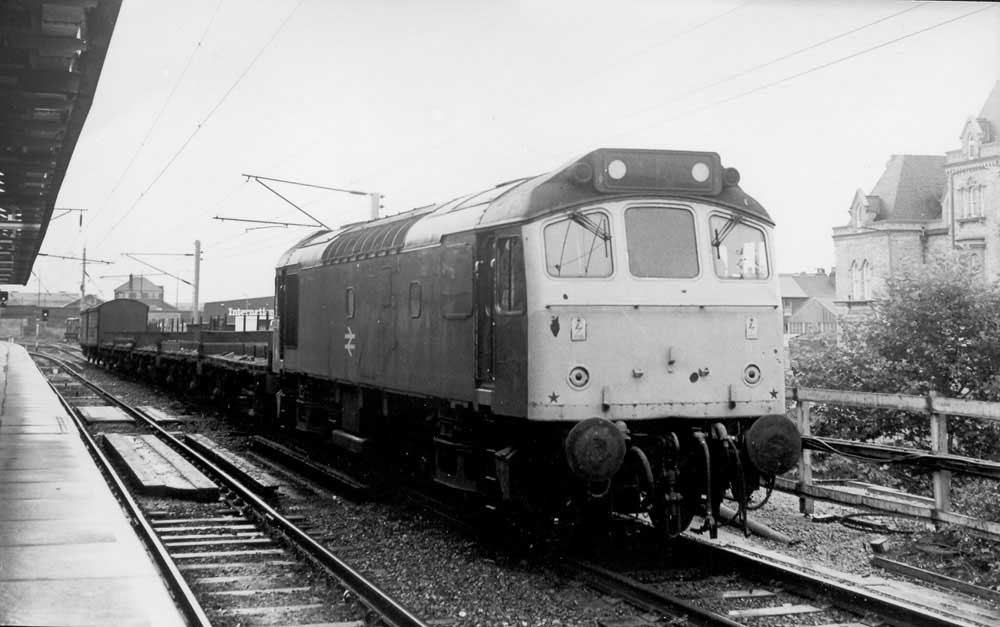 On the evening of September 19th 25297 was northbound at Toton with a Speedlink service. On September 22nd 25297 was noted at Wigan with short wheelbase ICI tanks.

25297 was at Northallerton with bogie oil tanks on October 1st.

The afternoon Halewood – Whitemoor (later Dagenham) car train, a booked Class 47 turn occasionally featured Class 25s, so noted on May 8th was 25297. 25297 was stabled at Saltley on May 23rd.

1985
The workings for 1985 started on February 25th with the 19.02 Manchester Piccadilly - Paddington requiring assistance from Stoke-on-Trent to Wolverhampton after the Class 86 failed.

25297 was light engine westbound at Manchester Oxford Road on March 5th. 25297 and a brake van worked through Manchester Victoria on March 9th.

25297 was suthbound at Crewe station with empty container flats on August 2nd. 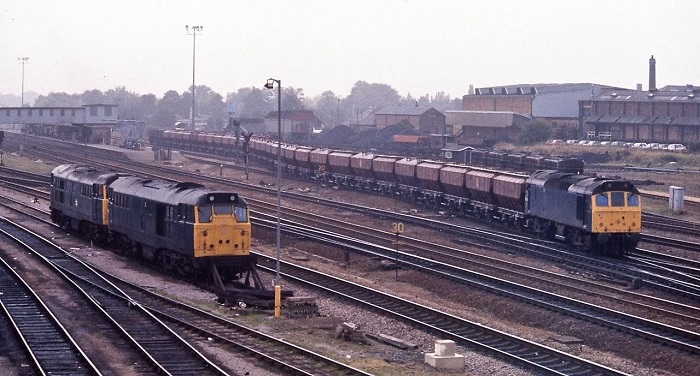 Photograph courtesy Peter Lovell.
25297 at Peterborough on October 18th 1985 with a lengthy train of wagons.

25297 was on a track panel train at St Helens Junction on October 27th.

On November 16th 25296 & 25297 were noted at Bolton with a lengthy train of empty newspaper vans for Red Bank. On November 26th 25297 was under repair at Allerton, at which time it was renumbered 25907. In renumbering the locomotive from 25297 to 25907 the staff painted over only the 3rd & 4th digits and replaced with new numbers, creating a rather uneven look on both cabsides.

1986
On February 22nd 25907 was eastbound under Bank Quay station with a freight for Warrington Arpley yard.

On March 1st 25906 & 25907 worked a Northenden - Appley Bridge rubbish train, on the late afternoon of March 2nd both were stabled at Warrington Arpley.

The 100th anniversary of the Mersey Railway was celebrated in early April. Part of the festivities included an Open Day at Birkenhead North depot on Sunday April 6th. Amongst the twelve diesel locomotives featured was 25907, 26027 & 33026. 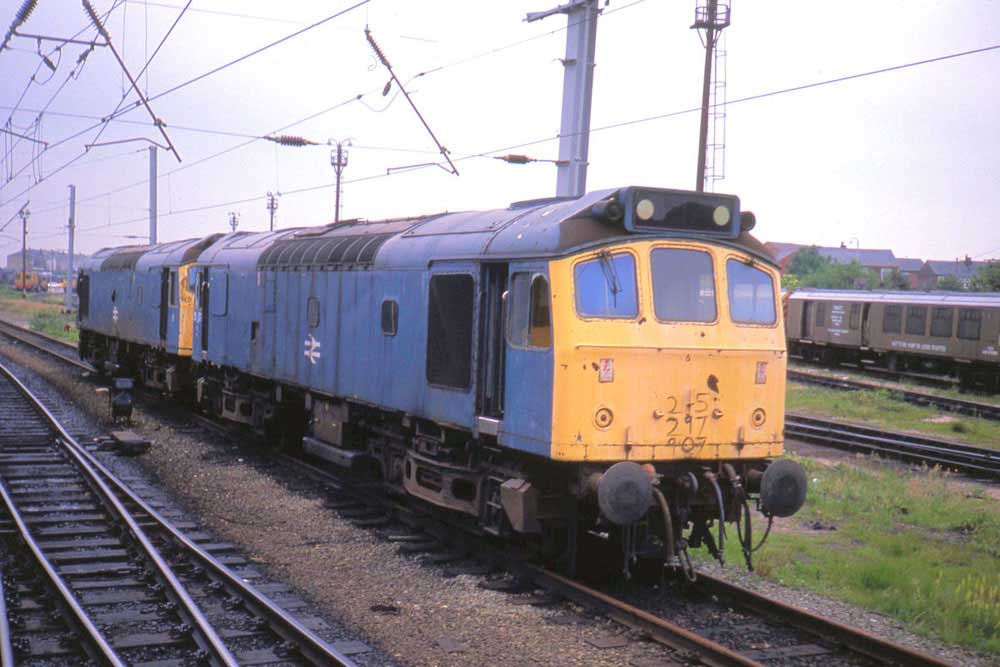 25907 was stabled at Warrington Arpley on September 7th.

Distinguishing Features
No.2 cab front: multiple dents/areas of missing paint: on 2nd man's side above and below the handrail, towards the middle between the lamp brackets, driver's side lower down near the corner: at least 1979 until withdrawn.