The first orders built at Derby were a compromise, featuring the English Electric engine and transmission but using the single large traction motor mounted above the frames in the engine compartment and driving the wheels through a jackshaft arrangement, as initially featured in the 1933 Armstrong Whitworth design. (The two axle hung self-ventilated nose-suspended traction motors driving through a single reduction gearing which featured under the English Electric designs had suffered from serious overheating.) Hence the flawed jackshaft drive would remain until the engineering difficulties in using forced ventilation and double reduction gearing on the axle hung motors had been overcome.

Three of the first order were fitted with vacuum exhausters, for the brake testing of assembled goods trains, this equipment was later removed. The second batch were fitted with a belt driven auxiliary generator for battery charging. In the earlier batch this had been done by the generator when idling. As these machines were to spend much time hump shunting they were fitted with two speedometers, the normal one showings 0-20mph, the second one reading 0-2mph. It was calibrated in 0.02mph divisions, a vernier control handle on the cab desk permitted fine adjustment of the locomotive speed.

The first twenty (7080 - 7099) were used at Toton, Willesden & Crewe South. A couple were borrowed by the War Department (WD) starting in 1941. Of the second batch (7100 - 7119) requests/demands were placed upon the LMSR to release them to the WD as part of the continued war effort. This proved problematic for the LMSR as the success of the existing diesel electric shunters, the increased demands from the wartime traffic and the additional manpower needed when diesel turns reverted back to steam shunters came at a time when the railways were being asked to do more than ever with ever diminishing resources.

As one might imagine the service histories for the LMSR machines were mundane, after Nationalisation they were renumbered 12003 - 12032 and all remained in service until 1964 when 12030 was the first withdrawn. By the end of 1967 all the BR machines were out of service & retired. None reached into industrial service or preservation, by the end of 1968 all had been broken up. They were outlived by the ten WD machines (LMSR 7100 - 7109, then WD 49 - 58). Some of the Egyptian examples lasted until 1974, whilst certain of the Italian machines (7103/05/06/09) were rebuilt in the 1980's and worked at least into the mid 1990's with a track maintenance contractor in northern Italy. By 1999 7106 was still in service with the privately owned La Ferroviara Italiana railway. Remarkably its remaining sister 7103 reached preservation at the Museo Ferroviairio Piemontese in Turin. 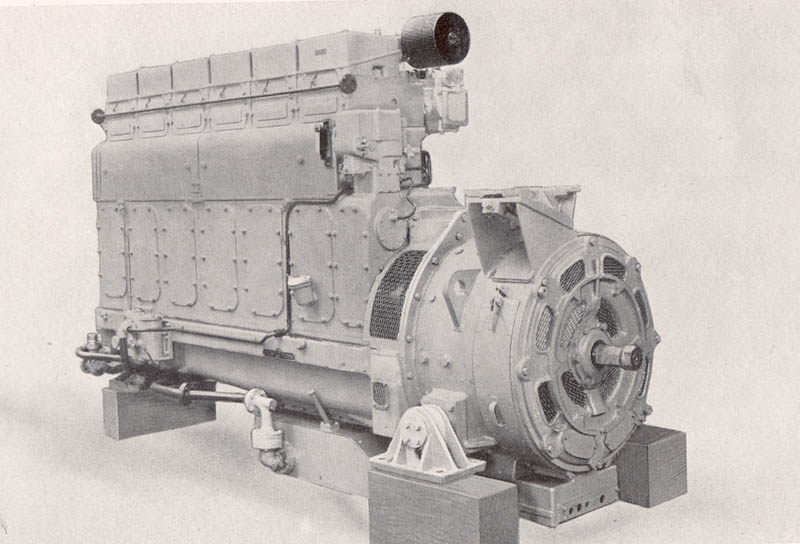 With a production span of over twenty five years the engine that went into the various 350hp shunting locomotives, including both pre-Nationalisation & BR orders, was probably the most prolific of any found on British Railways. The engine was also utilised in many overseas orders.

Late in 1940 authorisation had been recieved to build a further one hundred shunting locomotives, the CME stressing the known inherent advantages of the existing diesel electric shunters over their steam counterparts. A further twenty were also ordered to replace the 1935/36 batches which had been commandeered by the War Department. Both orders were cancelled due to the problems created by the escalation of World War Two.

In 1940 LMS 7074 became the guinea pig for the engineers to solve the problem of overheating in the English Electric design. Low speed and high current conditions found in regular & hump shunting produced large quantities of heat that was not quickly dissipated by the armature mounted fans. Reducing the locomotive's maximum speed from 30mph to 20mph allowed the fitting of double reduction gearing, and by installing forced ventilation to the motors solved the problem of overheating.

This modification was now featured in this and all following orders for what would soon become British Railways standard shunter. The layout remained very similar to earlier builds except for the better distribution of the internal components allowing for a reduction in weight of eight tons, these machines weighed 47tons 5cwt.

Visually this build would be the style that later would be easily recogniseable as the BR Class 08 standard 0-6-0 shunting locomotive.

This order was placed by the Ministry of Supply, fourteen were delivered to the War Department prior to the end of the Second World War, with the war ended the remaining six passed to the LMSR. Several of the WD machines saw brief service on the LMSR at Toton, possibly as a breaking in turn whilst ex-works from Derby, for the remainder of their WD careers the first nine spent much time in France, Holland & Belgium, the remainder seeing mixed service overseas and within the United Kingdom. Ten locomotives were purchased by the Dutch Railways in 1946 and remained in service into the 1970's. One ended its days in France, another being purchased by the Danish Railways. Those remaining in the UK worked out their time at various WD locations.

One early WD retirement was WD 877 (70271) which collided head on with Stanier 8F WD 512 (later BR 48775) on the Longmoor Military Railway (LMR) on October 13th 1956. Six soldiers were killed and twelve injured in the first fatal accident on the LMR. The diesel shunter was scrapped in 1957.

Two of this order are preserved, WD 70269, after many years of operation in Holland became part of the Dutch National Collection during 1995. And WD 70272 (later AD601) after retirement in 1980 was preserved on the Lakeside & Haverthwaite Railway, Cumbria, UK.

At about the same time these locomotives were beng built, the LNER workshops at Doncaster had taken their first foray in the 0-6-0 shunter arena by constructing four locomotives powered by the English Electric 350hp engine. These were numbered Nos.8000 - 8003 (later 15000 - 15003). A fifth locomotive was built but powered by a 360hp Petter engine, this was delivered after Nationalisation, numbered 15004. Additionally in 1945 the GWR ordered six more English Electric powered 0-6-0 shunters, these would not be built until after Nationalisation, numbered 15101 - 15106. A seventh similar locomotive for the GWR was built with a Petter engine, numbered 15107.

A second order placed by the Ministry of Supply to follow on from the above order was cancelled due to the cessation of hostilities.

The majority of this class lasted into the early 1970's, about half a dozen after withdrawal from BR went into industrial service, mostly with the National Coal Board.

Only one of this batch ended their days at Derby Works, blue liveried 'D' prefixed 12062, broken up in December 1971.

Since the LMSR had acquired much experience in the field of diesel electric shunting locomotives, it was only logical that they would eventually venture into the arena of building mainline passenger locomotives. The onset of Nationalisation spurred the authorities to put into traffic a mainline passenger locomotive prior to the disappearance of the 'Big Four' into 'British Railways'. Thus in May 1946 representatives from English Electric & the LMSR reached agreement on the construction of two 1,600hp six axle diesel electric locomotives.

Another project received approval just prior to Nationalisation, in October 1947 an agreement between Davey Paxman & Co, Shell Refining & Marketing Co & Lt-Col LFR Fell led to the eventual construction of the infamous 10100 Fell locomotive, with Derby Locomotive Works as the main contractor.

Of the above three locomotives only 10000 was completed prior to December 31st 1947, 10001 was still under construction and the Fell locomotive would not have the frames laid until March 1949.

Such was the speed of the project in the building of the LMSR Twins that 10000 was completed in seven months, being rolled out of the Works early in December 1947, allowing the locomotive to carry LMS on its sides. It was left to LMS Chief Mechanical Engineer Mr H G Ivatt to drive 10000 out of the paintshop on December 8th 1947. It would be put into traffic five days later. 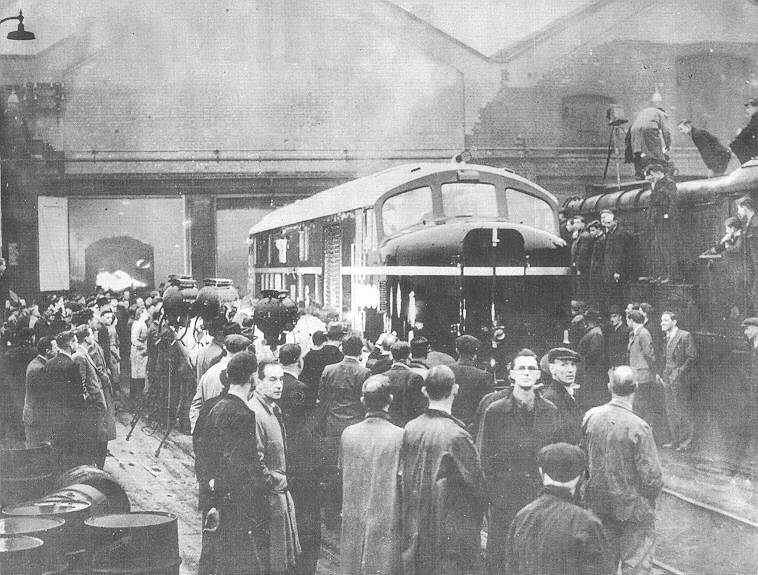 Photograph collection of webmaster.
Three weeks before the onset of Nationalisation, the LMSR turned out 10000 from Derby Works. Seen here on a dull December day with spotlights trained on the locomotive, 10000 truly basks in the spotlight surrounded by the press and railway personnel. It ran for sixteen years before returning to Derby and withdrawal. Escaping preservation it ended up at Cashmores, Great Bridge finally being cut up in April 1968.

1948
After several weeks of test running 10000 returned to Derby Works for modifications before going back into traffic during the second week of February. 10000 would return to the Works during July for examination. 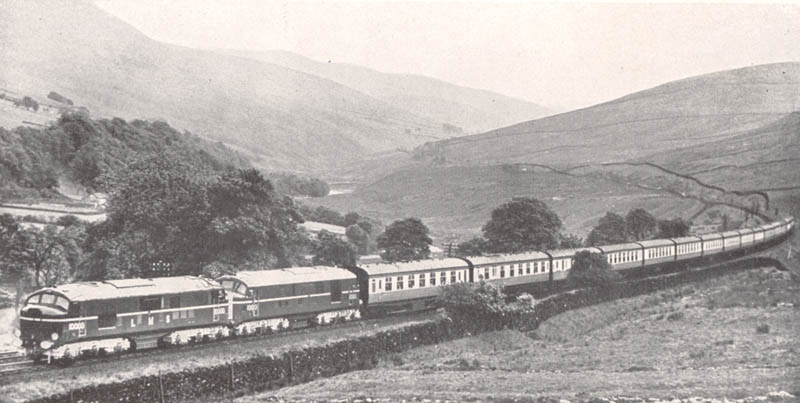 With at least fifteen coaches in tow 'The Twins' make a striking pose early in 1948 northbound in the Lune Gorge. 10000 still carries its LMS lettering.

10001 spent much of May 1949 in Derby Works undergoing overhaul. It would be back at the Works during December spending several months there. 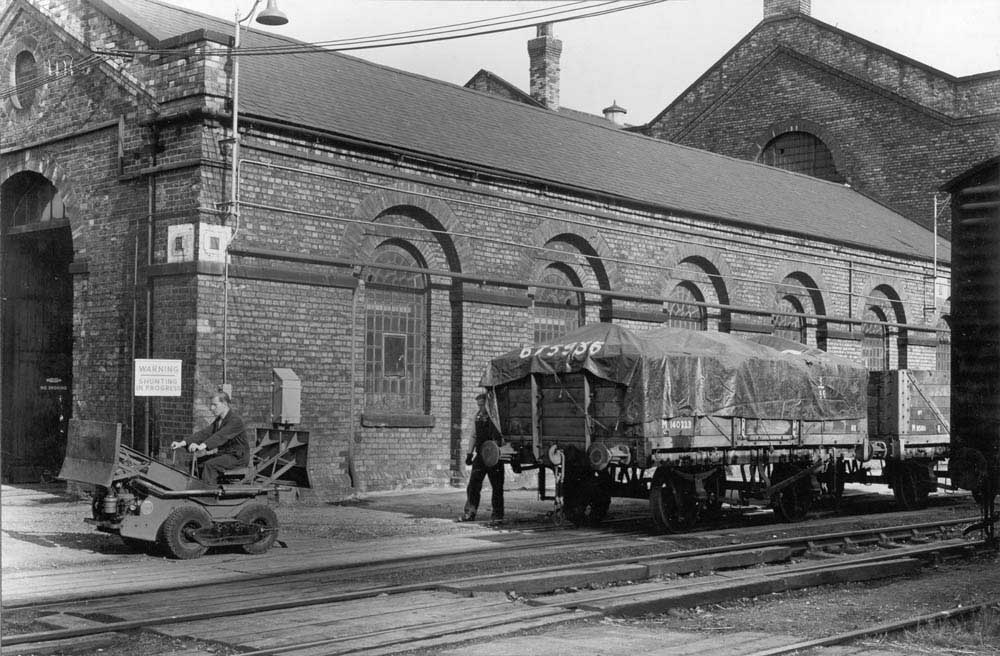 Photograph collection of webmaster.
An undated view of the Stores building in the Works. The tractor presents an interesting form of traction used to move the wagons about the sidings.